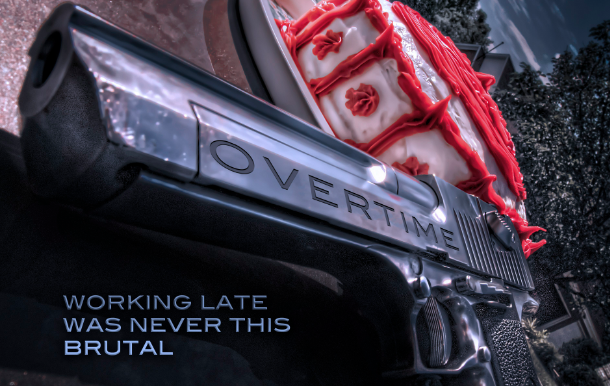 ‘Overtime’: Not Quite a Time and a Half

The sight of two hitmen in suits in any film made after 1994 is always a worrying sight. The Tarantino knockoff could have been its own section in Blockbuster during the late-’90s, with some of the dreck (Lock, Stock and Two Smoking Barrels, The Boondock Saints) achieving horrid amounts of cult acceptance in their own right. The death of video stores, appropriately, seemed to kill off the regular supply of half-assed independent projects indebted to the God of the video store as well, or at least made them agreeably invisible.

Imagine the tinge of shock and fear, then, when Raph (pro wrestler Al Snow) and Max (John Wells) get out of their car, suited and loaded with profane quips as they head to their first assignment of the day. Matt Niehoff and Brian Cunningham’s feature debut, Overtime, out now on Blu-Ray, nearly chokes on its bad banter and forced cool from the start, and the whole thing initially feels like a visit from the Ghost of Ripoff Past.

And then, the film slowly begins to work its charms. A generic opening of low-angle shots of cars jutting forward from rest, close-ups of guns and ammo, and an expository news report of a criminal defendant getting off scot-free set my eyes to rolling, but they refocused when the filmmakers start tossing some playful ideas into the mix. After Raph and Max inevitably give the aforementioned criminal the justice he deserves, we learn that their boss is actually the same attorney (Katie Stewart) who got the man off in the first place. It’s a deft twist that could be (and for all I know, is) in an old noir: a hitman organization that collects its fees from its own targets. That subplot is left frustratingly undeveloped, but it is the first hint that Overtime might have a spark of life to it.

And if that thread is abandoned too quickly, it is only because Cunningham and Niehoff bounce from idea to idea as soon some odd new notion strikes them. Raph and Max soon receive another assignment, but it also happens to be Raph’s son’s birthday, and Raph forgot. So, in addition to heading out to their next job, the lads must shop around for a present, collect a cake and rustle up a clown. The whole thing is endearingly absurd, and that is before the two reach their destination and a simple hit turns into an entirely different movie. I won’t spoil the surprise, but the total plot upheaval is so inexplicable and so utterly ridiculous that I could not help but enjoy it.

There’s a fine line between not knowing the rules and not caring, and I do not entirely know on which side Overtime falls. Anyone capable of giving these guys a solid budget would have made them narrow their scope, to focus on one, maybe two of its oddball aspects and cut the waffle, but Overtime just goes where it pleases. It would seem more amateurish if it didn’t look as good as it does, or at least as good as micro-budget HD will get you. (A curious thing about independent film: once upon a time it connoted reality with the falsity of grainy black-and-white stock, and now it does so with the smeared plastic smoothness of cheap DV.) And if a lot of it does not work, some of it genuinely does. The casual, even banal, chats between Raph and his wife (Cristina Mullins) about his job are funnier than any of the one-liners, though even a few of those manage to find their mark, such as Well’s exuberant delivery of “I found a cake!” in the middle of the climactic carnage.

If Overtime remains too rough around the edges for its own good, it at least proves that first appearances can be deceiving. It also makes a good case for filing the filmmakers’ names away to see what they might come up with if given some money and some better equipment.

‘Overtime’ is now available on DVD, and can be readily be found and purchased at its Amazon page.