The main character in Only Lovers Left Alive is literally a romantic. Adam (Tom Hiddleston) is a centuries-old vampire, and according to his lover Eve (Tilda Swinton,) his personality was shaped by Romantic-era “assholes” like Shelley and Byron. Now he resides in the ruins of modern-day Detroit, recording underground hits via his collection of ancient guitars. Eve is posted up on the other side of the globe in Tangiers; reading, taking in the sights, and sharing a blood supply with an anti-Stratfordian Christopher Marlowe. It’s a ludicrous premise played completely straight. Yes, it’s another totally-deadpanned, hipper-than-thou, culture-celebrating Jim Jarmusch comedy.

Though Only Lovers starts up with its couple on opposite ends of the planet, Eve quickly senses that Adam’s romanticized depressive tendencies are picking up. She’s not wrong – he’s recently procured a wooden bullet for himself from his miscellenia-dealer (Anton Yelchin, playing an alt-rock version of Steven Prince’s Taxi Driver character) – and so she jets off to Detroit to re-energize her beloved. Once together, adventures follow: among them a chase for O-negative blood (the only safe strain, thanks to the terrible diets of contemporary mortals), a night out clubbing, and contentions with the unending annoyances of Eve’s teenybopper sister (played by Mia Wasikowski.)

The events related above constitute the “plot” of Only Lovers Left Alive, but “plot” isn’t something that Only Lovers Left Alive is very interested in. In fact, everything that has to do with vampirism here – the search for blood, the addict-like high they get when they finally find a fix, the attempts to remain unnoticed by the public – is a Trojan horse. It’s a Trojan horse that allows Jarmusch to contemplate the evolution of culture across centuries, rather than just across generations. He clearly takes great pleasure in allowing Adam and Eve talk culture throughout the whole movie; they fandom out about everyone from Schubert to Jack White; the film’s structure and hang-out-style tone suggests Jarmusch’s much more interested in those conversations than he is in the search for plasma. 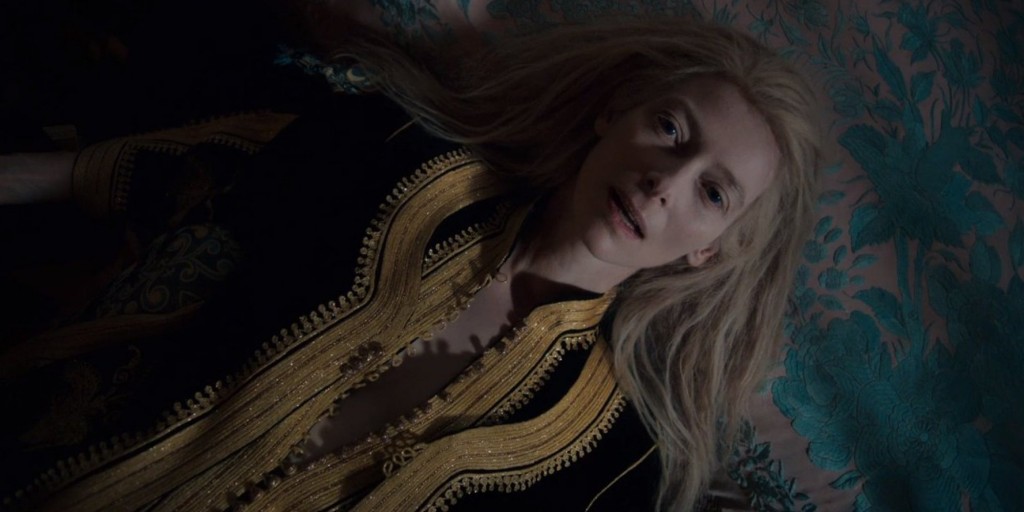 Perhaps more pointedly, that vampiric Trojan horse also allows Jarmusch to make a film about a steady, unthreatened relationship – one that’s been battle-tested by generations, one where commitment and love and fidelity is never in doubt. These two are clearly each other’s ideals, each other’s other halves. Adam’s the quiet pseudo-suicidal tortured artist; Eve’s the nurturing muse that counteracts his depression. He’s the lonely rocker; she’s the warm-hearted lover of books and nature. He’s an urban ruin, and she’s a globetrotting Earth mother. He’s the Romantic; she fuels the romance. This is the rare film about a couple that isn’t interested in watching them fight or argue – it’s just interested in watching them hang out together. It’s interested in watching them love each other.

So Jarmusch has made something most of us had never expected of him: a great date movie. And not in a cheap or crass sort of way, either – this isn’t Love Story, this isn’t Endless Love, this isn’t a tale of star-crossed lovers. Instead, Jarmusch’s film is about the oft-forgotten miniature-moments that occur between couples. It’s about the rush of sharing something that you love with your partner; it’s about the excitement brought on by seeing them after a long absence; it’s about the comfort felt when you’re sleeping on their shoulder. (The amount of shots here of Hiddleston and Swinton tangled up together, sleeping the day away, is almost absurd. It’s also ridiculously romantic, in a primal sort of way.) Only Lovers Left Alive is about how cool it is to have someone you can always talk to, whether it’s about Schubert, Jack White, or anyone in-between.

Adam and Eve hold contempt for the “zombie” hoards – that would be us mortals – who’ve contaminated their beloved cultures of art and science, having wreaked havoc on the lives of geniuses like Tesla and Darwin. The only respite they seem to find is in art, and in each other. So most of all, Only Lovers Left Alive is a movie about how the never-ending cruelties of humanity – spinning on throughout time, like a record never removed from the player – can be completely offset by the loving embrace of a partner. Only Lovers is a truthful, emotionally honest, and deeply lived-in depiction of the rhythms of a long-term relationship. Hell, there’s even an extended passage about how annoying it is to deal with in-laws.