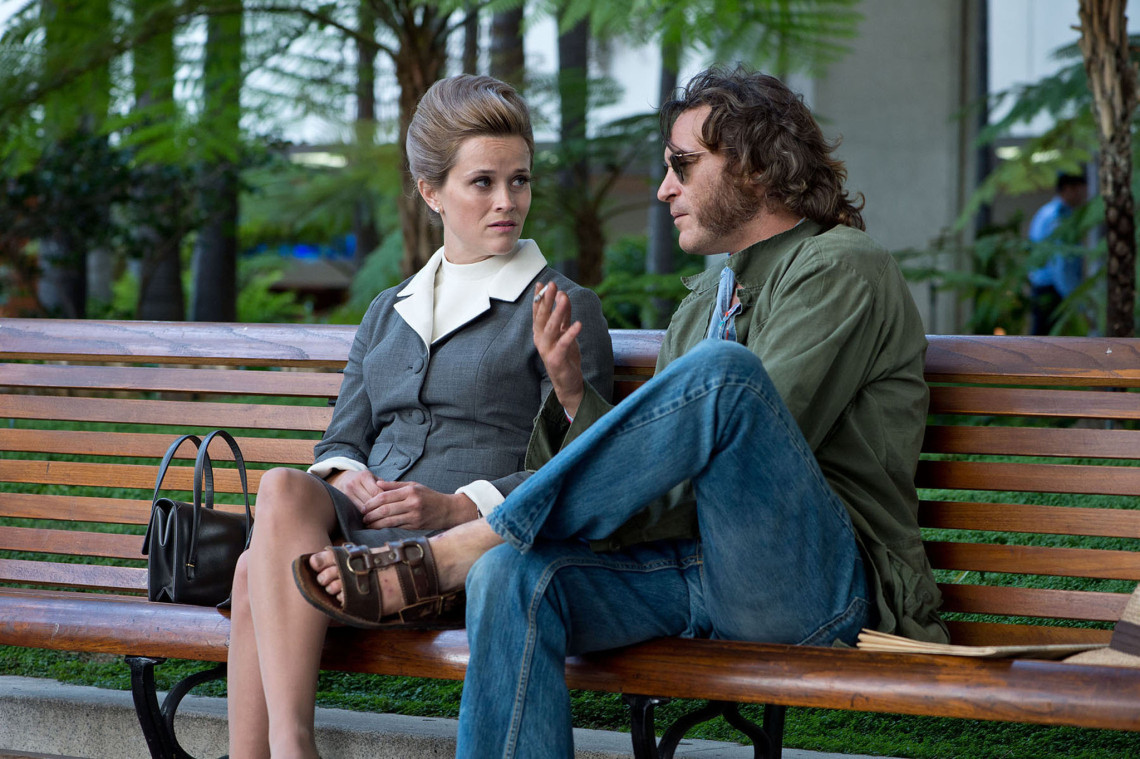 Note. This review originally ran as part of our coverage of the 2014 New York Film Festival.

What if Paul Thomas Anderson wasn’t the much-cherished heir apparent to American Cinema that many in certain circles wish him to be? What if the dude just wanted to get baked for two hours and imagine Cornelius the Ape tripping on acid to Can while starring in a Pink Panther movie?

Anderson’s new film Inherent Vice, which is neither a masterpiece nor anything that aspires to such, supports the theory that he’s always been first and foremost a great director of comedy. Despite the ambition associated with his recent work—their formal grandeur, volcanic performances and evocation of American history—it’s easy to overlook that films like There Will Be Blood and The Master were more often than not hysterically funny in their parodies of the human animal. Vice confirms Anderson as a bona fide satirist.

In adapting Thomas Pynchon’s rambling, drug-fried gumshoe novel set in 1970 Los Angeles, Anderson has returned to the funkier ensemble rhythms of his breakthrough, Boogie Nights, but wrapped them in the audacious style of The Master. The fusion of Pynchon’s antic dialogue and Anderson’s wandering camera can be jarring, but when the chemistry works—witness the slow, creeping pushes in toward unknowing characters in conversation—the result is a wonderful slipstream of madness.

Returning for his second collaboration with Anderson, Joaquin Phoenix plays Pynchon’s anti-hero “Doc” Sportello, a private dick with mutton-chop sideburns and greasy hair who comes on like an even jazzier, pothead riff on Elliot Gould’s Marlowe. Operating out of his own beachside “surgery”—with his very own gonzo lawyer, Fear and Loathing’s Benicio del Toro—Doc’s odyssey begins when his old squeeze enlists him to find a missing real estate developer suspected of being kidnapped.

The case—frequently interrupted for the imbibing of illicit substances, slapstick comedy and the pursuit of leads via doper’s ESP—leads Doc down a psychedelic rabbit hole of stiff cops, drug-addled dentists, double-agent rock musicians and spiritual crackpots; or, as the rest of the world knows it, California. Haunted by the specter of cults, new age opportunism, drug paranoia and Me Decade narcissism, Inherent Vice is as much a requiem for the slow death of the ’60s as it is a goofball, sun-kissed film noir.

As is the way of these movies, from The Big Sleep on down, the plot overcomplicates a simple story to the point where things can be outright confusing—especially so when many of the characters are high in the process. Fortunately, Anderson and his performers use the narrative as a framework to act the fool, which they do with considerable relish.

Phoenix and his director appear to have developed a wild intuition at this stage; while dialogue dictates that scenes play one way, they find creative spaces to play in the margins, throwing in unexpected gestures, tics and weird physical comedy to suggest an alternate world erupting in Sportello’s mind. His duel of wits with Josh Brolin’s flat-topped, orally fixated cop is one of the film’s great pleasures, as is a brief—but beautifully savored—cameo from Martin Short, who needs a PTA career resurrection, stat. Anderson’s decision to use oddball singer Joanna Newsom as the film’s crackly voice-over pays off, too—rather than unspool exposition, her character acts as the movie’s impish psychic conscience.

Is Inherent Vice—infamously derided as “Pynchon lite”— a “minor Anderson,” then? The more relevant question might be: Does it matter? While it’s certainly a sideways move after the astonishing The Master, one could just as well argue that Anderson’s earned himself the right to take a break, smoke up and giggle.