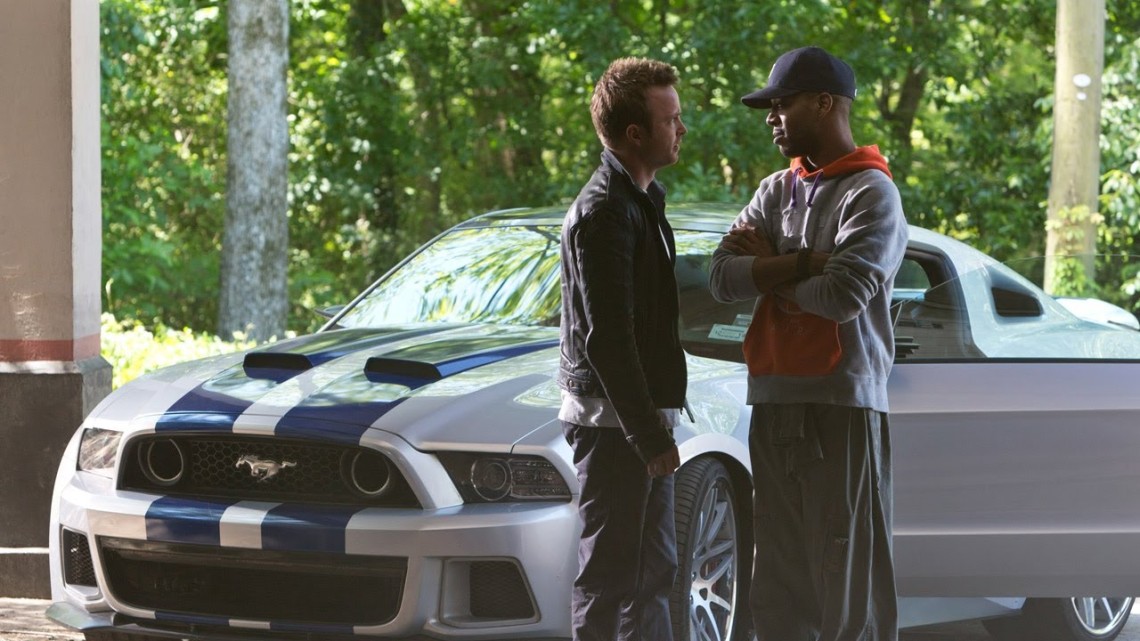 “Need For Speed” Burns Out Too Quickly

Early on in Need for Speed, a drive-in theater can be seen playing a clip from the foundational car-chase movie Bullitt, but the natural point of comparison for the film is, of course, the Fast and the Furious series. From a structural standpoint, this video-game adaptation operates on a similar level of stakes as the first few F&F movies while carrying over the bombast of its more recent installments: it centers on ace driver Tobey Marshall (Aaron Paul) out for revenge in the form of a race, yet this story is set against a cross-country journey that lends an otherwise minor film an epic sweep.

The film blazes through its opening introductions and its first race scenes as if to outpace the questions they raise, such as why a street race with a paltry jackpot of $5,000 is planned using hi-tech computers and monitored by Cessna. (Hilariously, when Tobey mentions that he is behind on the loans for the family garage where he and his cohorts spend their days, one pal protests, “But we just got five thousand dollars! as if it were the 19th century and that sum could more or less set up a man for life.) Nothing sticks until ex-friend and now-professional racer Dino (Dominic Cooper) comes back to town to have Tobey and his boys fix up a rare Ford Mustang, which reignites petty rivalries that culminate in another race for bragging rights that leaves Tobey’s friend Pete (Harrison Gilbertson) dead and Tobey sent to prison, all while Dino uses his connections and money to get away scot-free.

The script barrels through material like this, and the rest of the film, with a sense of forward momentum it never stops to belabor. When Tobey gets out of prison, for example, the audience is spared talk of a vendetta and plans for revenge against Dino, instead jumping immediately to him returning to the now-foreclosed garage not to take stock, but solely to get a car from a previously established dealer, Julia (Imogen Poots). Naturally, she insists on coming along, something that causes immediate friction that is swiftly put into action by way of a scene of Tobey recklessly driving just to scare her. Further character motivations and traits are revealed throughout the film, scarcely more than a single line at a time as Tobey and crew hurdle toward California from upstate New York in time to get into an underground race that will allow him to get near Dino.

But that same refusal to slow down also leads the film to breeze past any consideration of the consequences of its actions. Things may grind to a halt to mourn for Pete in the first act, but that same respect is never extended to the many civilian bystanders seen careening off roads and into each other for the sake of a meaningless feud between two Yankee hicks. The film’s very selling point—its use of practical effects over CGI—only makes each sickening crunch and flayed car body all the more haunting, particularly as the film gets so caught up in Tobey’s story as to see him as the principled, honorable hero.

Even the other racers who assemble for the climactic, winner-takes-all competition (thus accepting responsibility for any harm that comes to them), are treated with such thoughtlessness—with dash-cam footage inserted just long enough to see fiberglass shredded like paper—that Tobey and co. start to come off as psychopaths. The Fast and the Furious movies found workarounds for things like this by abandoning logic altogether and pitting former low-level thieves against international criminals, but Need for Speed trusts that the righteousness of Tobey’s vengeance will put out of mind any concern for the dozens of people he potentially gets killed or maimed.

It is possible to craft movies about people of few words and professional action that reveals their inner selves; just ask Michael Mann. But Need for Speed never bothers to build anyone out beyond the thinnest stereotypes. Tobey’s crew are so anonymous that even their multi-racial casting cannot prevent them from being interchangeable—if nothing else, Need for Speed demonstrates that the F&F franchise’s cast is memorable not merely for diversity but distinction of personality, however broad that may be. And for all the giddy, valorized destruction, the film’s greatest offense is how it treats Poots as nothing more than something pretty to look at, even giving Julia a heroic driving scene of her own just so it can ignore her obvious driving skill to end the film on a tacky joke about women drivers.

Paul at least gets enough material to let his innate charisma push him through the project unscathed, while Michael Keaton makes it so clear that he sat down in a chair as the oddball organizer of the secret race just long enough to get a paycheck that you can’t fault him. In all other respects, though, the best that can be said of the film is that it moves too quickly to leave a lasting impression of its blithe, retrograde quality.