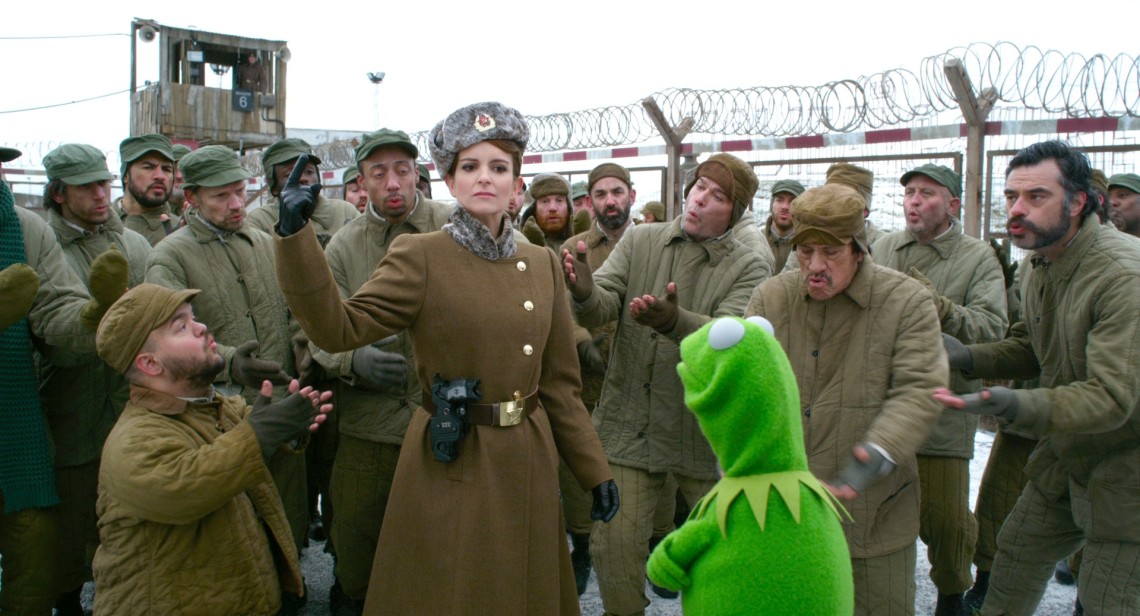 In 2011, Jim Henson’s Muppet characters roared back onto the big screen after more than a decade away with Disney’s The Muppets, a moderate box-office success that played on the nostalgic effect of Kermit the Frog, Miss Piggy, Fozzie Bear, and co. spending time together again. It’s been less than three years since that film opened, winning a Best Original Song Oscar in the process, but the Muppets still felt the need to convince audiences of their worth with the follow-up Muppets Most Wanted. (The original title, referenced in the bouncy opening number, “We’re Doing a Sequel,” was The Muppets…Again, which isn’t a marked improvement, but…literally, the characters champion that title in the first song, and then we get this one instead.) It’s perhaps a bit painful to revisit this joyous and goofy movie on Blu-Ray, because guess what? It turns out the Muppets were right to feel the need to reassert themselves; this film made just over $50 million domestically and floundered with critics.

And yet, in many ways, Muppets Most Wanted is an improvement over its predecessor, precisely because it allows the Muppets to take center stage. (The 2011 film is enjoyable, no doubt, but it turns the original Muppets into supporting characters.) Here, though there are a bevy of cameo performers and three main human actors, they’re all on the sidelines. Even Ricky Gervais, who usually has such an aggressive screen presence, dials it down as Dominic Badguy, the number two to the world’s most dangerous frog, Constantine (performed masterfully by Matt Vogel). Constantine just happens to look exactly like Kermit, save for a giveaway mole; the criminal takes Kermit’s place, shoving our hero into a Siberian gulag run by a besotted warden (Tina Fey, delightful as usual). Constantine, meanwhile, runs rampant with the Muppets on a world tour where he allows them free rein as he and Dominic attempt to steal the Crown Jewels of England before Sam the Eagle and an Interpol agent (Ty Burrell) catch up. The plot, as is often the case with Muppet movies, is deliberately silly, but the script (by Nicholas Stoller and director James Bobin) is full of self-referential and generally parodic humor that hits often.

There are a few hiccups along the way, unfortunately climaxing with one of the worst examples of CGI in a mainstream movie, possibly ever. (Even if the CG was flawless, its inclusion would still be pointless.) But the story, which plays on the notion that the Muppets getting everything they want after an initial and successful comeback would be disastrous, is shrewdly told and the songs by Bret McKenzie are mostly as solid and catchy as those from the 2011 film. (The highlight remains Constantine’s disco-infused “I’ll Get You What You Want (Cockatoo in Malibu).”) The cameo count is far higher than that of previous Muppet incarnations, from Disney Channel stars to musical icons to Danny Trejo. Put it this way: if you laugh at the idea of Ray Liotta whining, “But we like Boyz II Men!”, then this movie is for you. (But everyone would find that funny, right?)

Unsurprisingly, the Muppets Most Wanted high-definition transfer is solid in both the video and audio departments. The balance between musical numbers and speaking scenes is well modulated, and the video is as predictably sharp and crisp relative to other new releases. The Muppets themselves look almost brand-new, even though their design is intentionally a bit ramshackle.

Sadly, there’s no audio commentary on this Blu-Ray; wouldn’t it have been marvelous to have the Muppets, in character, riffing on the film? In general, the special features are a bit light, with one notable exception. There’s a music video of “I’ll Get You What You Want (Cockatoo in Malibu),” with the key difference being that McKenzie himself sings to Miss Piggy instead of Constantine-as-Kermit. It’s mostly just the sequence from the film, except with McKenzie crooning, which is both endearing and a little strange. There’s also a quickie gag involving Rizzo the Rat trying to exhort the filmmakers to include him in more of the finished product, and a ten-minute “blooper reel” that, of course, features more than just your average flubbed lines.

What may (and should) pique your interest is the promise of three different cuts of the film. Upon selecting “Play” at the main menu, you can either watch the theatrical cut, an “unnecessarily extended” cut, or the Statler & Waldorf cut. It should surprise no one that the latter cut is, shall we say, much shorter than what was in theaters. (Anyone hoping for an MST3K-style cut, sorry to disappoint you.) The “unnecessarily extended” cut is, indeed, longer than the 107-minute edition by 12 minutes, although the back cover says it runs 124 minutes. The additions are seamless, thankfully; with some moments, it’s very apparent why they were excised, though some gags are among the most inspired. (Two standouts: Kermit forcefully asking Ray Liotta, an inmate at the gulag, if he’s “eyeballing” the frog; and a particularly clever breaking-the-fourth-wall gag outside the gulag.) Also, if you’re a fan of the soundtrack and wanted to see the full songs, you’ll be glad to know that the extended cut doesn’t trim any of the musical numbers like the theatrical cut does.

Muppet fans should rejoice at this Blu-Ray, if only for a longer cut of the wackiness from Kermit, Piggy, and friends.