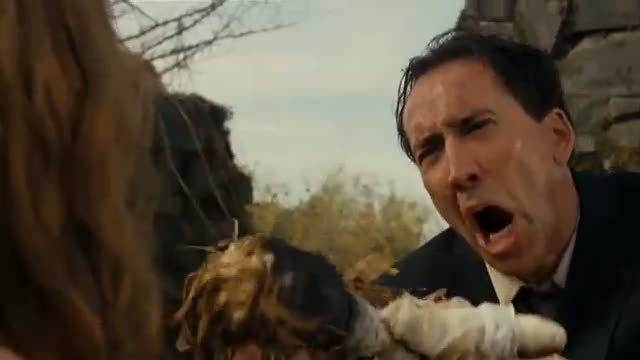 Movie Mettle columnist Natalie Zutter is currently away on a trip to Germany, so I’ve volunteered to fill in for this week. Don’t worry, for your Queen of Mettling shall return in the near future…which is to say, next week, most likely.

Oh, Nic Cage. Are you even a resident of this planet, anymore? You’re such a great actor, yet you pick so many awful projects. You’re an Academy Award winner that’s starred in just as many bad films (maybe more) as good ones. Your mannerisms are so strange, yet transcendentally unique at times. And your screen presence is unlike any other actor that’s ever walked the face of this earth.

And I can’t help but love you immensely for it. Good, bad, phoned-in, or batshit insane, there’s almost always something to admire in a Nic Cage performance. And with The Croods releasing this Friday (Cage’s second CG-animated role since The Ant Bully, though you can argue that G-Force counts as well), it’s time to look back at some great moments from the man, the myth, the legend, the star that no one can replicate, with 5 of his most Cagey moments in cinema history.

John Woo’s third Hollywood foray, Face/Off starred John Travolta and The Cage in a cat-and-mouse action-thriller in which Travolta and The Cage switch faces and make each others’ lives complete and utter hell. Even while playing John Travolta, The Cage never loses his…Cageyness. Just pay attention to the way this fairly simple scene transforms into an awkward, creepy moment as The Cage makes strange expressions with his eyes, starts to maniacally laugh as he threatens to remove Travolta’s face, then gets into a hallucinatory gun showdown with his own reflection.  And c’mon, how can you not love the face he makes at the mirror? 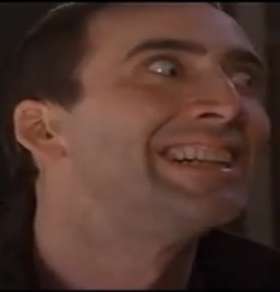 The Cage plays a con man with a serious problem: OCD, to be exact. And as we all know, an OCD-afflicted individual can never have his/her patterns and rituals broken up, or terrible things will happen: Like spasms, nervous breakdowns, and over-the-top acting. The strangest thing about this moment in Cage History is how he twitches, making “UNF! UNF!” noises like he’s mimicking a rave, and then finally yelling out “Bullshit MON!” as his accent awkwardly shifts into something completely different. You have to wonder what was going on at the set of this movie. Did the director specifically want him to make that awkward accent change? Did The Cage just start making UNF noises on his own? Were they just filming a random hour in the everyday life of Nicolas Cage and pretending it was a movie? Such questions can’t be pondered on when The Cage makes a face like this. 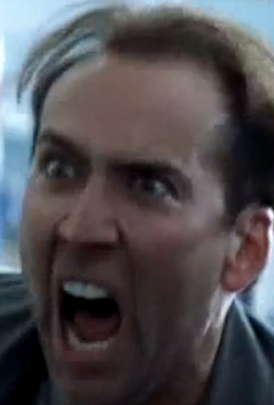 Werner Herzog’s 2009 film is simply just an exercise in Cagesploitation. Nothing more, and nothing less. All plot and characters take a back seat to simply let The Cage just run rampant in one of his most off-the-wall performances in his career, solely because it was made exclusively for him to go as nuts as humanly possible. There are dozens of scenes in this film I could pick from, but the Cagesploitation theory becomes most evident in the film’s most infamous scene, in which after shooting up what I remember to be a druglord and his crew, The Cage simply says the lines “Shoot him again. His soul is still dancing!” and then proceeds to maniacally laugh while he hallucinates someone breakdancing alongside the corpses of the men they just killed, with some iguanas thrown in for good measure. Why this random shift into the psychotic mind of The Cage’s Bad Lieutenant? Because Werner Herzog, that’s why.

Oh, and this facial expression. 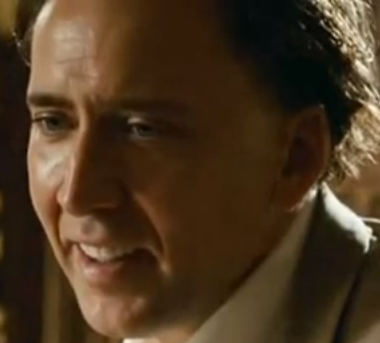 Yup. You’ve all seen the video, you all remember the bear suit, and you all most likely have “NOT THE BEES!” ingrained into your memory for the rest of your life. And there’s a reason why. The Cage is unhinged in this film in a way that the film doesn’t even require. This isn’t Cagesploitation, nor is it even meant to be camp. It’s like the director wanted to make his own reimagining of the original horror classic, but The Cage just decided to either troll everyone on set simply because he could, or save an awful movie by making it as wildly entertaining as possible. And now, we have “OH GOB THE BEES!” Oh, and this… 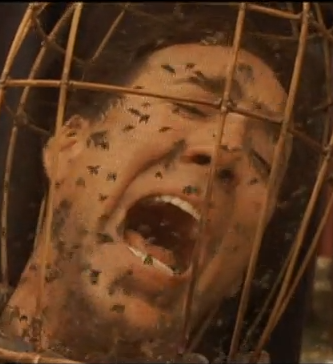 But if you thought The Cage was absolutely batshit in The Wicker Man remake, you clearly haven’t seen or heard of 1988’s Vampire’s Kiss. There are really no words I could add to this entry that are able to fully capture the sheer insanity displayed in the above video…

So here’s the Cage Face to end them all. 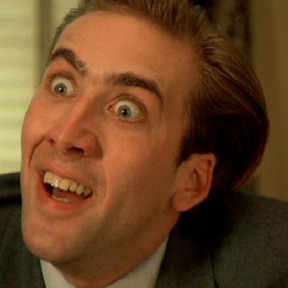 Have a genre of movie, specific trope, or actor that you wish you could sit through? Leave your request in the comments and Natalie might take it on in a future column!

[Sidenote: The extent of my research for this article was really just these clips. I have seen Bad Lieutenant and Matchstick Men in their entirety, and parts of Wicker Man, but other than that, the rest I haven’t seen for myself. If there are any inaccuracies in this list, feel free to notify me.]