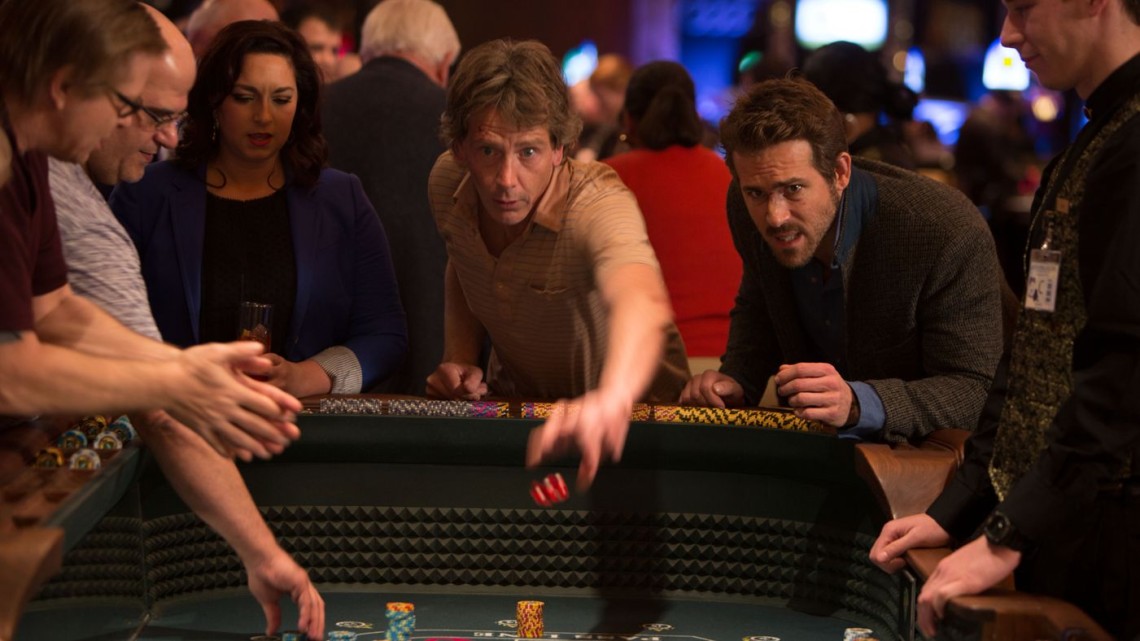 “Mississippi Grind” Is A Toast to Beautiful Losers

Mississippi Grind is a low-stakes movie about high-stakes people who flirt with life and death. Films about gamblers tend toward the tragic more often than they do the comedic (Ocean’s Eleven films notwithstanding), but Mississippi Grind never quite imposes a sense of danger to its lead Gerry (Ben Mendelsohn), even when he receives text messages from a thug rummaging through his house and threatening to harm his cat. Gerry gets beaten up, beaten down, beaten side to side; his chum, Curtis (Ryan Reynolds), winds up on the receiving end of a fist far less often, but still goes out of his way to bloody his nose when occasion demands. When you’re a loser, injury might just be a part of your daily routine.

So Mississippi Grind makes a toast to its beautiful losers, and indeed, Gerry and Curtis lose far more often than they win. Gerry’s a sadsack real estate agent with a gambling problem. Curtis is a toned-down version of the obnoxious loudmouth characters Reynolds typically plays. They meet at a poker game, and Curtis takes a shine to him quickly enough to rouse our suspicions, but not Gerry’s. From there, it’s all simple math: Gerry has a truckload of debts he needs to repay to his bookmaker (Alfre Woodard in a terrific cameo), and Curtis happens to know of a poker tournament held in New Orleans several days hence. So the duo piles into Gerry’s car and makes for the Big Easy with visions of dice rolling in their heads.

The resultant journey mashes together equal parts road trip movie and gambler movie. Gerry and Curtis make stops along the way to New Orleans: In St. Louis, Curtis connects with Simone (Sienna Miller), an escort and Curtis’ sorta girlfriend, and in Little Rock, Gerry drops in on his ex, Dorothy (Robin Weigert), who has moved on and remarried. The detours feel like diversions at first, signals that writer-director team Anna Boden and Ryan Fleck don’t really know where they’re going or what they plan on doing once they reach their destination.

Mississippi Grind’s final act, packed with about three endings too many, bears out that looming narrative uncertainty. But Curtis likes to reminds anyone in earshot that “the journey is the destination.” We’re here to invest in Gerry and Curtis as humans first and hardluck highrollers second. The film doesn’t care as much about our heroes winning big against stacked odds as it does about figuring out who they are as people, and why, exactly, they’re drawn to each other to begin with. Gerry thinks Curtis is his good-luck charm. Curtis’ motivation, well, that’s a little less clear, and doesn’t become much clearer even once the movie ends, but that turns out to be to the film’s credit. Boden and Fleck realize that the relationship between these two is more interesting for what isn’t made explicit through the script. Pardon the poker idioms, but if they don’t know when to stay, they at least like to play with their cards close to the vest.

So do Reynolds and Mendelsohn. Mississippi Grind premiered out of Sundance earlier this year to high praise, particularly for its principals. Mendelsohn has been on the radar of international cinema since 2010’s taut Aussie crime drama Animal Kingdom. In that film and others he’s starred in since, Mendelsohn prowls the frame like a shark trawling for seals. In Mississippi Grind, he exudes an unexpected sympathetic charm. Gerry is easy to like. He’s easier to pity, but even if he’s responsible for all of his suffering, he’s so damn earnest that we can’t help we root for Mendelsohn’s quiet, dignified posture of failure. Reynolds, meanwhile, succeeds just by reining it in. Actors of his sort—young, brash, loudmouthed and brimming with charisma—don’t need to go over the top to draw our attention. They just have to play it cool, and if Curtis is nearly as much of a deadbeat as Gerry, he benefits from Reynolds’ magnetically subdued spark.

The two actors are so good together that by moviegoing law, they absolutely must team up again in the future for any project Hollywood throws at them. Buddy flicks come and go, but successful buddy combinations are much harder to come by. Reynolds and Mendelsohn work, and so Mississippi Grind does, too. Boden and Fleck have confidence in their craftsmanship (especially their relaxed, punchy dialogue), and a clear affinity for the cinema of the 1970s. They love the 70s so much, in fact, that they’ve based their entire movie on the great Robert Altman flick California Split and decided to call it an homage rather than a remake. Maybe, sans the film’s great central performances, the repurposing of Altman’s classic would feel more like a major faux-pas than it does. It’s hard not to admire their naked moxie at favorably aping one of the best.