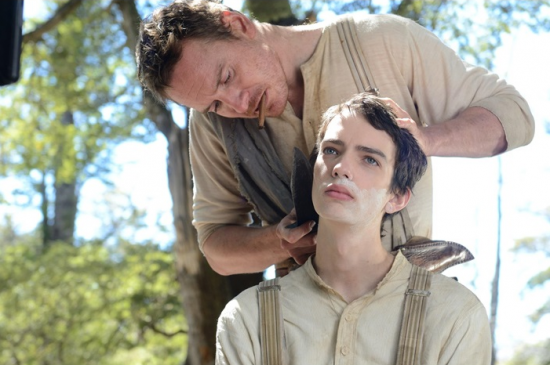 First Look at Michael Fassbender in “Slow West” is Anxiety-Inducing

Delays in production ultimately cost audiences the opportunity to see Michael Fassbender in Jane Got Her Gun, but the actor will give fans of Westerns a second chance when he appears in Slow West. Fassbender plays Silas Selleck, a hired gun to protect teenaged Jay Cavendish (Kodi Smit-McPhee) from the dangers of the American West. If the screen capture below is any indication, Cavendish has a great deal to fear in his travels.

Fassbender has built a pretty solid career out of playing characters whose motivations can’t be easily identified. Those eyes can be very inviting or filled with cold, deadly malice and the switch between both emotions is lightning fast. It’s not hard to imagine that a friendly shave could very quickly turn into an  attempt on Cavendish’s life.

Set at the end of the 19th Century, SLOW WEST is an American western filtered through the eyes of European filmmaking. The story centers on 17-year-old Jay Cavendish (McPhee) who has traveled from Scotland to Colorado to be reunited with the woman with whom he is infatuated. He is quickly confronted by the dangers of the frontier and so teams up with a mysterious traveler named Silas (Michael Fassbender), who agrees to protect him for cash. Jay’s journey is fraught with danger, double-crossing and violence as he comes to realise that America is not easy on the innocent.

Slow West also stars Ben Mendelsohn, Rory McCann and Caren Pistorius. There is currently no U.S. release date for Slow West, but anticipate the film to head to theatres later this year.