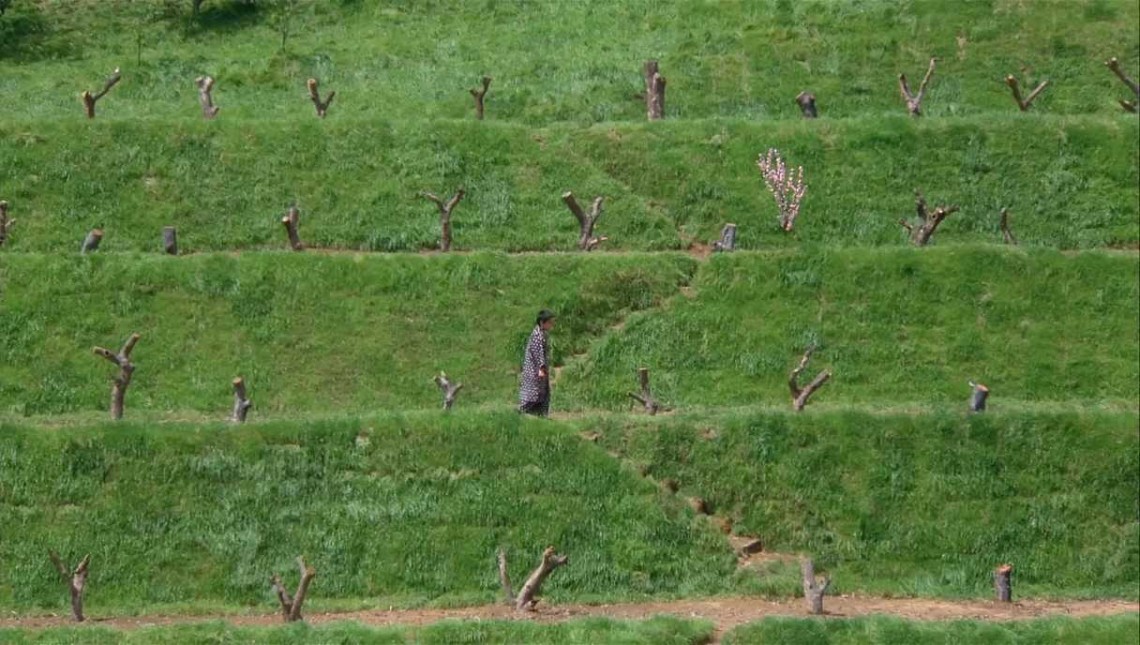 Like the magic lantern that evokes childhood’s fascination with moving images in the films of Ingmar Bergman, the whole of Akira Kurosawa’s Dreams seems to take us back to the medium’s infancy, to its primal pleasures and terrors. It is a film in which the shot, the sequence, and every element of cinematic storytelling feel newly invented. Yet this feature, composed of eight episodes, each a dream of Kurosawa’s, is also the testament of a venerable artist at his peak, one with much still to say but with nothing left to prove. Made after the director regained the world’s attention with his arthouse smashes of the 1980s, Kagemusha and Ran, and before his smaller, more meditative final two films, Rhapsody in August and Madadayo, the 1990 release has so many formal fascinations that it’s tempting to focus solely on them. Yet that would shortchange the emotional richness of his work, which is considerable: More than any other Kurosawa film—except perhaps Ikiru—Dreams might be regarded as an interior self-portrait, abounding in personal associations that are at once psychological, artistic, and philosophical.

For example, “Sunshine Through the Rain,” the first of the film’s eight dream episodes opens with a boy emerging from a house whose portal bears the family name: Kurosawa. So the child—identified as “I,” and who appears in five subsequent episodes—is the artist, but not, as the story reveals him, in a strictly literal or realistic sense. Forewarned that foxes perform their wedding ceremonies on days when sun and rain mix, the boy ventures into the woods and witnesses a decidedly unrealistic processional, an elaborately choreographed nature-dance with humans playing the foxes. Here, the autobiographical merges into the fantastical, the personal reaches out to embrace folklore and tradition.

And here, too, something else happens: The basic cinematic unit of subject (the person who looks) and predicate (what he sees) is set up in a way that equates the looker with the real (the actual Kurosawa, as a boy) and the looked-at with the imaginary (those fanciful foxes) so strikingly that the opposition is far more noticeable than it is in most movies. And that one opposition is just the beginning; it leads to countless others, to a profusion of contrasts, reflections, mirrorings, doublings. Indeed, “Sunshine Through the Rain” itself quickly serves up a narrative doubling in the form of a second journey into the woods. Once the boy returns home, he is told that watching the foxes was a crime and that he most go back to seek atonement. It is a dangerous task, he is warned: he must be prepared to die. The episode ends with the child traversing a diaphanous landscape surmounted by a rainbow. Notice the difference between these twin journeys: While the first begins with a slightly ominous mood but also the promise of wonders to come, the second looks wondrous at the outset but holds the possibility of something else—death.

Considering the very personal tone of Dreams and that Kurosawa was 80 when he finished it, it’s hardly surprising that the film meditates on the balance of life and death. Yet this thematic crux is articulated not as a simple, binary opposition, but as an intricate intertwining: death-in-life and life-in-death. It also informs the film’s intricate formal and narrative stratagems, e.g., the ways that Dreams 1-4 mirror Dreams 5-8, as can be seen in a comparison of the two sections’ initial episodes.

Like “Sunshine Through the Rain,” the fifth episode, “Crows,” depicts a dual journey in which the venturesome “I” (now an adult visiting an art museum) first experiences a wondrous encounter, then heads in a direction that appears even more fantastical but concludes with an ominous portent. Here, the protagonist’s encounter—effected by a miraculous, FX-enabled leap in time and space—brings him face to face with Vincent Van Gogh (played by a russet-bearded Martin Scorsese), before his second trip sends him careening deliriously through the “fields” of Van Gogh paintings including “Crows,” in which the rising black birds contrast sharply with the surrounding brightness: a surge of darkness that could connote madness/depression (which obliquely links Van Gogh and Kurosawa, who attempted suicide in 1971) or death. Yet here there’s a difference with the end of the first episode: the earlier vision of man-in-nature has been transmuted into one of nature-in-art, a change that implies consciousness, agency and even responsibility on the part of the artist. 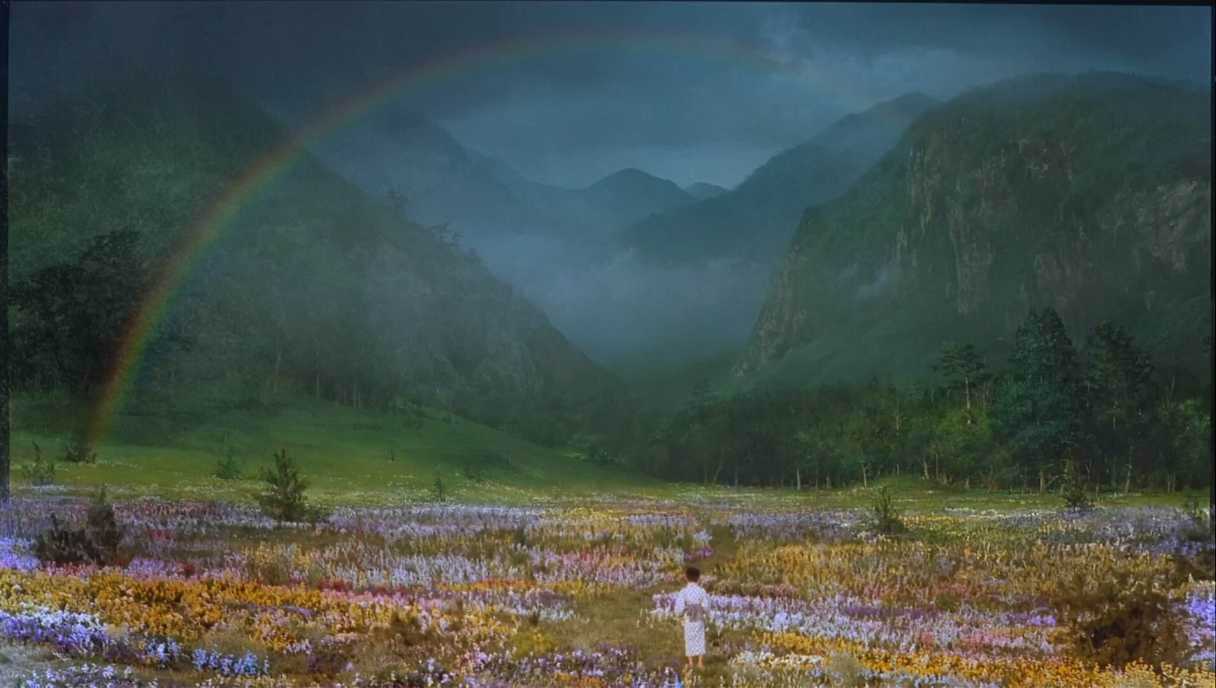 The contrasts between the film’s two halves, each with four sections, are significant. Dreams 1-4 project from the present to the past and focus on Kurosawa-surrogates awed or terrified by natural or supernatural phenomena (the spirits of a destroyed peach orchard in 2, a furious mountaintop blizzard in 3, a hellish dog and a regiment of dead soldiers in 4). This half of the film might be headed “Man Confronted by Nature.” Then, in Dreams 5-8, Kurosawa expands his vision toward the future and humanity’s ways of subduing the natural world, for good and ill. Here, the operative idea might be termed “Nature Confronted by Man.”

After the vision of “Crows,” which shows the artist turning the natural world to his ends without destroying it, the film gives us two evocations of futuristic hells-on-earth. In Dream 6, “Mount Fuji in Red,” two men, a woman, and her two children are pushed toward the sea by the hideously red-hued explosions of nuclear power plants which threaten to obliterate all life in Japan. The hallucinatory Dream 7, “The Weeping Demon,” then shows a man witnessing the posthumous spiritual agonies of people killed in the nuclear holocaust. Yet the horrors of these two episodes are happily reversed by the final one, “The Village of the Watermills,” where a young man visiting an idyllic waterside town hears a wise old man telling of the villagers’ decision to forsake the lures of dangerous technology in order to live in harmony with nature, and then witnesses children laying flowers on a stone memorializing a traveler who once died there.

While Kurosawa suggested that all of the dreams given cinematic form in Dreams were actual dreams of his, and some reflect elements of his life noted in his book Something Like an Autobiography, what’s most striking are the meanings created by his ordering of these dramatic units. The film’s first half gives us two episodes where nature’s beauties are emphasized, and two where its terrors are uppermost; here the protagonist is implicitly Kurosawa the man, whose imaginary journey carries him on a descent from child-like wonder (1,2) to grown-up fear and horror (3, 4). In the second half, when the self-consciousness of artistic creation enters the narrative as a subject, the descent is reversed and Kurosawa suggests that the aged artist’s path leads from the troubled egotism of pure creation (Van Gogh) through a painful recognition of his collective responsibilities (the Dantescan lessons of Dreams 6 and 7) to the doorway of philosophy (Dream 8), where he is able to envision a place where man and nature, life and death, self and others, art and wisdom are finally balanced and reconciled.

This thematic gist is reflected in most facets of the film’s formal organization. As Noel Burch wrote of Kurosawa (and the italics are his), “Nothing reveals the manipulator’s hand so much as symmetry.” And while the film’s emphasis on symmetries evokes numerous parallels in the traditional arts of Japan and other cultures, it also suggests how east and west converge in Kurosawa’s own artistry. After all, when art enters Dreams as a subject at the beginning of its second half, the artist depicted is a Western painter played by a Western filmmaker. From here on it’s clear that Kurosawa’s focus is not just Japan but the world—just as nuclear annihilation is a global not a local threat—and that his delight in artistic creation as he enters his ninth decade is a gift he offers to philosophically minded filmgoers the world over.