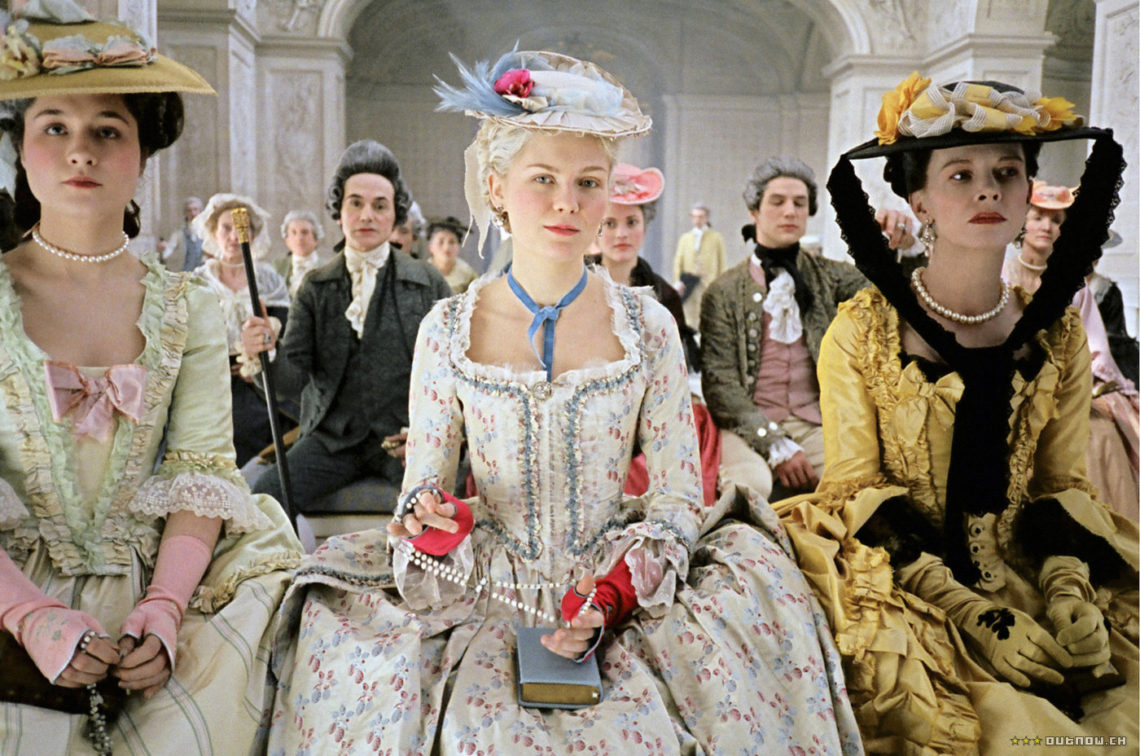 Tina Hassannia writes an appreciation of Sofia Coppola's modernized 2006 take on the story of Marie Antoinette.

By the time you get to the much-anticipated “Let them eat cake!” scene in Sofia Coppola’s gravely misunderstood 2006 film Marie Antoinette, you’re either sympathetic towards Coppola’s feminist treatment of the queen’s life story, or you’re not.

The sympathizers are more likely to notice the film’s clever double-layering of historical fictionalizing within this scene: As the queen’s companions read aloud slanderous libelles from which the fake quote first originated, there is a brief imagined shot of Kirsten Dunst, who plays the queen, lying luxuriously in a bathtub wearing diamonds and dark-red lipstick, declaring the famous words in nonchalant and dismissive fashion. It is one probable vision of how the French public saw the queen, but as Coppola gently reminds us time and time again, she is not the real queen. Certainly Dunst, with her American accent, pug named “Mops,” and Converse sneakers, in no way exudes historical authenticity. Those jewels in the tub, that vampiric lipstick: This is not the queen we’ve come to know for 90-plus minutes, and so the context in which “Let them eat cake” is finally heard appears simply absurd to the particulars of Queen Dunst’s world.

“That’s such nonsense. I would never say that,” she says to her friends. In Marie Antoinette, Dunst plays up the vocal intonation of an American teenage girl, one too cool and smart to sound like a Valley Girl—but the way she so easily shrugs off the idea of addressing her public’s concerns is also indicative of her naïveté, a product of being young, sheltered, and spoiled. Yet by this point in the film, even her simplistic understanding of her political reign comes as an understandable development of her treatment in the hands of the rigidly traditional and uncommunicative French royalty.

One of the reasons why Coppola’s deliberate anachronisms—the much-discussed, blink-and-you’ll-miss-it shot of the Converse sneakers amid frilly heels; the post-punk and New Romantics soundtrack; the inaccurate and wildly inconsistent accents among the characters; and the contemporary slang—work so well is that they’re cultural items we can much more easily relate to than the stuffy and ridiculous daily rituals that make up the Dauphine’s existence. That allows us to more closely align ourselves to Marie, who considered the French royalty’s countless traditions as ludicrous and intractable. The zenith of this traditionalist absurdity comes in an early scene when the Countess of Noailles (Judy Davis) explains how the Dauphine is to be dressed by female members of the court every morning, who are present inside her private room before she even awakes. Such courtly attention—and unavoidable judgment—is downright creepy: They wait for her to take the smallest of actions, like getting out of bed, to dote on her with even smaller actions, like replacing one garment with another, before proceeding to the next quotidian action, each more pampered than the last. This is all complicated by the fact that higher-ranking court members keep entering her room as Marie is attempting to dress—or be dressed, as it were. As she stands there, cold, naked, and vulnerable—an ironic state of affairs given that she is the Dauphine—Marie waits for the newest highest-ranking attendant to help her dress before that person is outclassed by another new visitor. Coppola constantly shows us Marie’s point of view as people gravely bow and curtsy in front of her, lingering on the expectant faces of the serving members, all a risible combination of stoicism, respect, contempt, and boredom.

When they’re not in formal settings, the aristocrats and peasants look disapprovingly at Marie, from the moment she leaves her childhood home in Austria and becomes an unwitting pawn in her mother Empress Maria Theresa’s (Marianne Faithfull) political strategy for Austria to stay friendly with the French, right through to the end of Queen Marie’s rule when aristocrats refuse to join her in applause at an opera. Every step of the way (literally), Marie enters new French territory, full of stifling social mores and traditions in a frigid, indifferent atmosphere ruled by disaffected and unfriendly royalty—the worst offender her silent milquetoast husband, Louis XVI (Jason Schwartzman). This sets up a unique kind of alienation for Marie—inescapable, privileged, and containing such importance that it could potentially alter the political futures of France and Austria—that Coppola beautifully, gradually articulates, allowing the viewer to see the queen’s humanity beneath all the decadence afforded to her. We can scarcely blame the young Austrian princess’ need for catharsis after all the unnecessary attention, rules, and scorn. 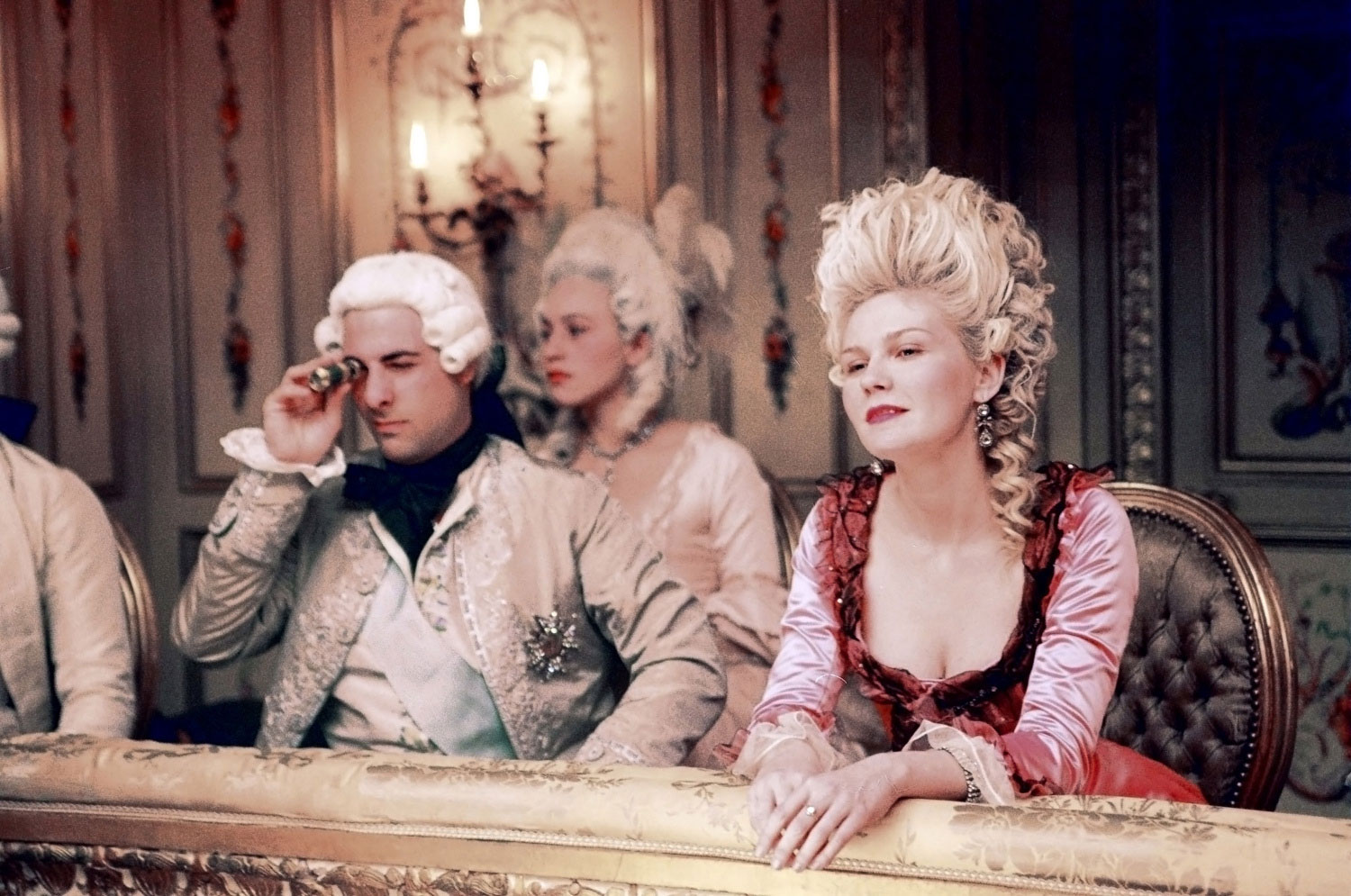 Coppola shows us that Marie Antoinette was, after all, just a girl, someone with habits, sexual desires, and vices not unlike our own. She loved spending time with her girlfriends, dressing up in the latest fashions, trend-setting, gambling, and partying. It wasn’t her fault that she was unaware of what was going on outside of the castle, even as the country’s funds dwindled and the taxes rose. Besides, her trivial yet harmless spending is contrasted with the equally frivolous yet far more deleterious financial planning of her husband in aiding political causes such as the American colonists, a decision that imposed a massive cost to France.

Coppola’s film focuses on how much of people’s disdain for Marie’s actions, or lack of “action”—her frigidness the supposed reason why it took the regal couple 7 years to consummate their marriage—was a direct result of her being a woman. The film nimbly shows Louis’ lack of interest in sex and his ineptitude in understanding how sex even works until it’s compared to his nerdy childhood hobby, key-making, the act only making sense to him when illustrated through the mechanical function of a key and lock fitting together. We see the suffering, stress and embarrassment their lack of children causes the queen and carefully highlights the injustice of a people solely blaming a woman for her inability to give them an heir, which furthers our solidarity with the misunderstood queen.

It is possible that Coppola saw a bit of herself in these stories, sourced from Antonia Fraser’s sympathetic biography, Marie Antoinette: The Journey. Given that so much of Coppola’s early fame surrounded her much-maligned performance in her father Francis’ The Godfather, Part III, coupled by accusations of nepotism even before she started directing films, and considering the fact that women directors have tremendous difficulty creating or sustaining careers, it’s no wonder her status as an auteur is often questioned or ridiculed. Nor would it be surprising if Coppola sees her own reflection within Marie Antoinette’s tragic story, despite it being a few hundred years old. The public mockery, the inability to be taken seriously due to one’s age and gender, the fake and expensive atmosphere in which Coppola was raised—these factors must be taken into consideration given how uncompromising they are in representing the luxurious boredom of one female character after another, the director daring to empathize with them instead of easily mocking them for not being aware of their privilege.

Instead, Coppola films the lived-in experiences of contemporary Marie Antoinettes, giving time, value, and purpose to the small, quiet moments of her characters’ lives, who daydream in lonely bedrooms—be they in castles, suburban homes, or hotels—and lounge reflectively in bathtubs. Their silence isn’t an indication of their vapidity in Coppola’s world, but a muted yearning to comprehend their unique reality. Coppola does all this without valorizing her characters, by outlining their weaknesses and failures, and in the process she quietly humanizes them. Let them eat cake, her films tell us, and let us live vicariously through their decadence.