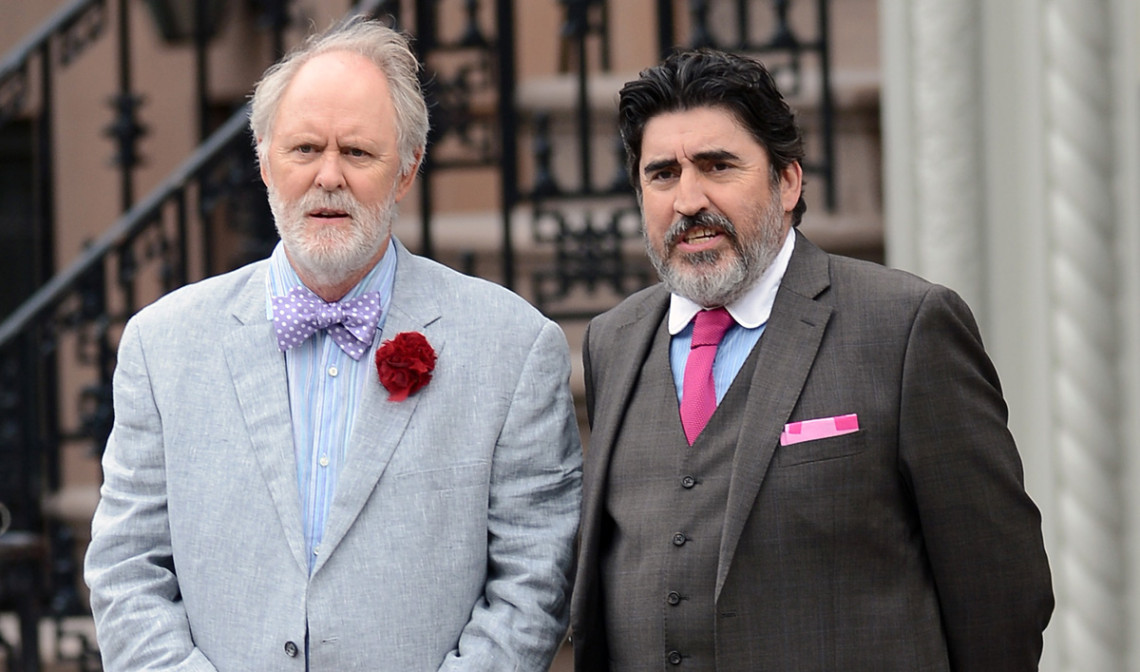 Love is patient, love is kind, and in Love is Strange, it’s put through the test of distance, family, and bigotry. Ben (John Lithgow) and George (Alfred Molina) are finally getting married after more than two decades of living together. But glad tidings are brief when George’s employer (and the couple’s main source of income) finds out about the marriage and has to fire him, per archdiocese ordinance. Unable to afford their apartment, the lovebirds are split up: George at a young couple’s rowdy home and Ben at his nephew’s household, which is slowly starting to strain from the turmoil between husband (Darren E. Burrows) and wife (Marisa Tomei).

The acting is stupendous, with Lithgow and Molina making an endearingly lovely couple. Ever dedicated to their roles, we fall for the music teacher and retired painter during their big morning getting ready for their wedding. Ben can’t find his glasses, George is growing impatient. How long did Lithgow and Molina film before their relationship felt so lived in? Within the first few moments of separation, we can see the anguish etched into the actors’ faces. It becomes a shadow that grows on their faces, both realizing their intrusion into other relationships as their temporary stays grow longer. Ben is the more expressive of the two, but in George we sense an unseen sense of shame furrowing his brow. It’s these subtle flairs that make Love is Strange a treat to watch.

While Ira Sachs does a bang-up job getting the complicated relationships of various characters just right, the movie itself does not come across as polished. The harsh digital overlighting mars the soft interiors the characters occupy, coming across like an unwelcomed guest. Sachs’ camera does overwhelmingly better in nighttime or interior shots with no natural lighting, basking in warm and colorful glows of the set. Other portions of the film remain clunky, as during Molina’s spoken letter to his former student’s parents. Was the letter sent to them or is this just what he wanted to say? Does he ever get to say his peace? Plenty of other questions are never cleared up in the script, like why would anyone steal French books from a library.

On the upside, this is a very New York film with very New York problems filtered through a multigenerational cast. Lately, we’re accustomed to watching Girls, Frances Ha, and the like to the point where it seems like only young folks live in Brooklyn and Manhattan. Far from it, and Love is Strange serves as an antidote to that bubble. Some people put up with the high rents and smelly transportation because their community is here, their family is here, their culture is here, and their livelihood is here.  Ben and George have to fight to stay in New York City just as much as they have to fight to stay with each other.

The strangest thing about Love is Strange is how familiar it all is. Tired relationships, troubled relationships, how different stages of life affect the kind of relationships you have with partners, friends, and family. As the various relationships swirl around Ben and George’s, the film highlights how much more the two seem to treasure each other’s company. Things happen around them, but they are not ruled by other commitments or calendars. Despite spending most of the screentime apart, the audience is invited to enjoy Ben and George’s company as much as they do. Consider yourself cordially invited.