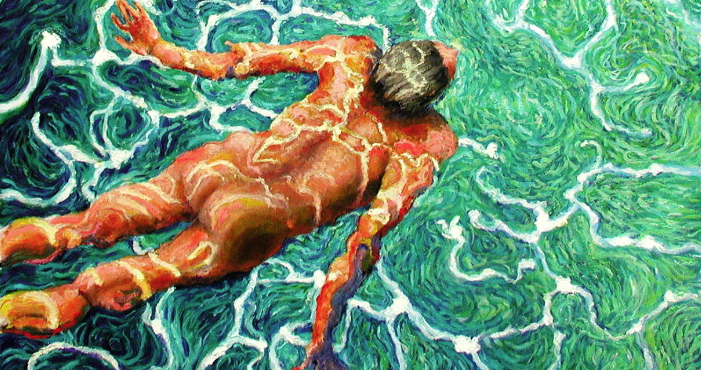 Looking Back: ‘The Swimmer’

Frank Perry’s The Swimmer (1968) is set in a cozy Connecticut suburb of commuters and mid-afternoon martinis and big houses with swimming pools—so many pools, in fact, that Ned Merrill decides they form a river to his house, making it possible for him to swim home. The film spends one late summer day with Ned, following him from one backyard to the next, from one gathering of old friends to another, with occasional forays into the woods and highways that crisscross his spacious neighborhood. Initially, he’s met with warmth. But as the day wears on, the response transforms into one of swelling hostility, slyly suggesting that Ned may not be exactly what he seems.

What is Ned? Well, at first glance he’s a much-loved husband and father of two, a success both financially and socially. He’s the kind of guy who can just swing by his neighbors’ homes and take dips in their pools, who fixes up an old hot dog cart to please his kids. Although he’d be loath to admit it, he is visibly sinking into middle age, and he’s played by Burt Lancaster, another aging paragon of American masculinity. Then in his fifties, Lancaster only wears a swimsuit for the duration of The Swimmer, and it’s a brave move: not merely for the amount of skin on display, but because his body acts as a manifestation of Ned’s downward arc, now looking virile and rugged, then suddenly weakening, shivering, struggling to get out of a pool.

That body, when coupled with Lancaster’s mile-wide grin, does a lot to define Ned onscreen. The rest of the work is done by Lancaster’s co-stars, whether they’re his hard-drinking peers or the 20-year-old former babysitter he forms a short-lived relationship with or the erstwhile mistress (Janice Rule) he drops in on toward the end of the day. Everyone has a different reaction to Ned, but most seem uncomfortable with him, even if they mask that discomfort with politeness; many seem repulsed by a recent past of which Ned is in total denial. Sometimes, these others draw out his loneliness, leading to scenes where Lancaster’s grin gives way to a pulverized look, one of wounded disbelief.

It’s a tragic performance, as Ned’s illusions get dented, damaged, shattered. Midway through the film, he spends some time with a little boy who can’t swim, and together they mock-stroke a length across an empty pool. When asked if that length counts toward his swim home, Ned explains that “if you make believe hard enough that something is true, then it is true, for you.” And at first that line sounds like just a bit of feel-good wisdom, but really it’s the key to this whole character study, to its vivisection of Ned’s patriarchal self-image. He makes himself out to be the man he’s supposed to be. He conceals the truth beneath paper-thin self-deception. It’s a lie with so much pathos to it, and that pathos drives this strange, striking drama.