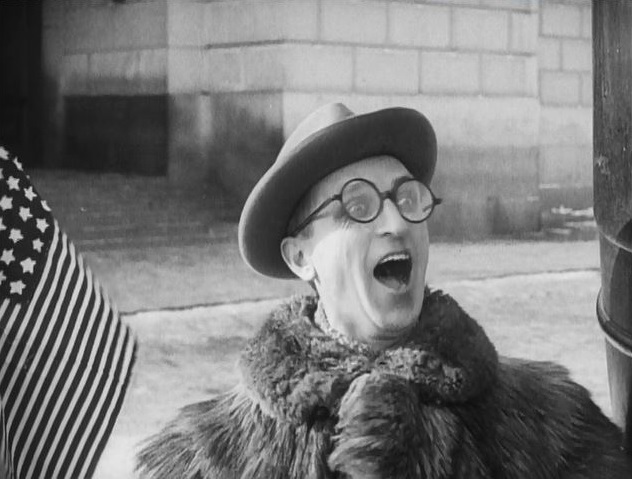 Looking Back: ‘The Extraordinary Adventures of Mr. West’

Countless wars have been fought over the past 90 years. Cities have been demolished and rebuilt. Nations, including the Soviet Union, have crumbled. Yet the anti-American satire of Lev Kuleshov’s The Extraordinary Adventures of Mr. West in the Land of the Bolsheviks (1924) is still dead-on. And as long as Americans act like entitled idiots around the world, it’ll go on ringing true. These days, Kuleshov is best-known as an early film theorist; you can hardly get through a typical Film 101 class without learning about his namesake effect. But as The Extraordinary Adventures of Mr. West proves, he was more than adept at practice, too. This is silent comedy at its rowdiest and most overtly political.

It all begins with John West, an American YMCA leader, taking a trip to Moscow alongside his bodyguard, the rambunctious latter-day cowboy Jeddy. No sooner have they set foot on Soviet soil, however, than the two of them are separated. West is swiftly snatched up by a gang of lowlife con artists, and Jeddy reacts to this crisis the only way he knows how: by punching, lassoing, or shooting everything in sight. The remainder of the film cross-cuts between their respective misadventures, with West humiliated and bilked out of a fortune while Jeddy works to rescue his employer, culminating in a triumph for both our “heroes” and the Soviet state. Misconceptions are erased, a cat has kittens, West orders a portrait of Lenin put up in his office—a happy ending!

This is entertainment with such a strong ideological bent that the last few minutes are basically a propaganda victory lap. (The message: “Yaaay, Bolshevism!”) But the ideology never obstructs the entertainment; rather, the two build on each other through Kuleshov’s comic modus operandi of cartoonish exaggeration. West and Jeddy, for example, are more stereotype than human: one an impossibly gullible bourgeois tourist clad in an oversized fur coat, the other a willfully destructive Ugly American. The grifters who prey on West aren’t depicted with much subtlety either, engaging in Three Stooges-style brawls and playing into his xenophobic fantasies in order to squeeze more money out of him. Every gesture, stunt, and plot twist leans toward the self-consciously ridiculous.

Thanks to this over-the-top strategy, The Extraordinary Adventures of Mr. West doubles as thrilling action-adventure and as hilarious parody. Because although West and Jeddy are ridiculously dumb, their dumbness is also recognizably American. Like the ease with which the swindlers manipulate West merely by flattering his social conscience, or Jeddy’s one-man shot at bringing manifest destiny to Red Square. Kuleshov and his collaborators may have been drawing these caricatures from the other side of the world, but I’ll be damned if they didn’t pin down some aspect of our national character with still-impressive precision. The film’s abundance of pratfalls certainly doesn’t hurt, either.