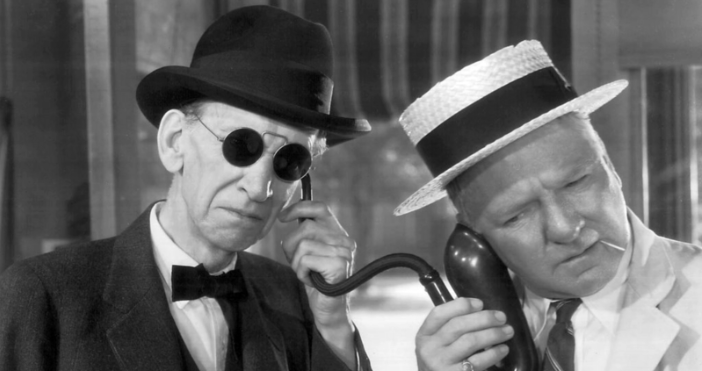 Looking Back: ‘It’s a Gift’

Family life is by its essence a form of captivity. It means being chained to a unit of people, and the fact that this bondage is abstract makes it that much harder to escape. Family life is a source of frustration, makes one pace like a trapped animal, and best of all provides limitless fodder for comedians like W.C. Fields. In It’s a Gift (1934), Fields—he of the nasal voice and rotund frame—plays Harold Bissonette, a mild-mannered grocer struggling to navigate the spaces of his home and workplace. He maneuvers around the Scylla of his wife (Kathleen Howard) and the Charybdis of his daughter (Jean Rouverol), all the while he nursing his own American dream: that of buying a California orange grove with money left by his dying Uncle Bean. A morbid dream? My, yes. But then, this is chiefly a funny movie, not a sentimental one.

Laughs are the film’s raison d’etre, which is why the plot I outlined above operates mostly as a structuring principle for Fields’ string of increasingly sophisticated gags. Scenes where the Bissonette family squabbles about their impending inheritance and cross-country relocation alternate with layered set pieces in which Fields must overcome obstacle after obstacle in order to perform a single, simple task. He wants to shave, but his daughter needs the bathroom mirror. He wants to sell groceries, but a small child and blind man have different plans. (In this latter gag, it’s jarring to see such intricate plotting at work opposite the nauseating caricature of a disabled man swinging his cane and wandering into traffic.)

The film’s centerpiece is a 14-minute sequence where Fields lies down on his porch in the early morning and just wants to get some sleep, but every force in the universe conspires to oppose him. Certainly it’s the most relatable portion of this or almost any other film. Here as elsewhere, Fields employs repetition and gradual escalation, bringing back hostile neighbors from earlier in the film (including that same small child) as well as other, equally noisy interlopers, then working them all into a pattern of rhythmic cruelty. The actor himself is just lying motionlessly when these conflicts begin—he’s a reactive comedian, not an active one—but Harold gets castigated for his role in them nonetheless, usually by his wife, who harangues him in Howard’s opera-trained mezzo-soprano voice. The porch gag is a mini-narrative of domestic persecution, sometimes even reminiscent of Jacques Tati’s brand of wordless comedy.

It’s the high point of It’s a Gift, though the Bissonette family’s trip to California does contain a few more comic gems: a messy picnic on a mansion’s front lawn, Fields’ tour of the collapsing house he’s bought, and the sudden wish fulfillment ending. It’s a deus ex machina, but still so gratifying for a character as long-suffering as Harold Bissonette, who finally becomes upwardly mobile (and granted the space he needs) in the midst of the Depression. It’s a giddy little lie to counterbalance the rest of the film with its hilarious but existentially discouraging truths. I suppose it’s a gift from this comic auteur, this maestro of misanthropy—from W.C. Fields to his own long-suffering audience.