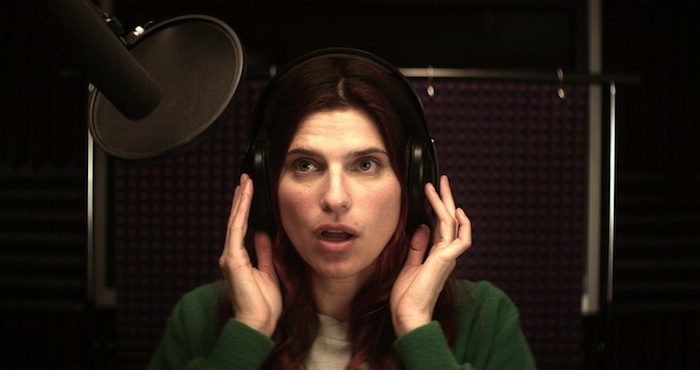 It’s an unexpected development that a relatively mainstream film has been made about voiceover artists, a subject which I had figured would only ever get its due in a nice-but-forgettable documentary. In a World… is about more than just the people who talk over movie trailers and advertisements, though. It’s about feminism, family, and show business. And while it is not terribly great, it’s a nice, eminently rentable movie.

Director / writer / producer Lake Bell plays Carol Solomon, a vocal coach living in the shadow of her father, Sam (Fred Melamed), a titan of the voiceover world. We’re told he was a contemporary of the Voice of God himself, Don LaFontaine. Carol feels like she could make her own mark in the industry, but it’s not a field that’s very receptive to women, and Sam is constantly discouraging her. After she has to move out of her father’s house and in with her sister Dani (Michaela Watkins), she chances upon a gig narrating a trailer. The producers immediately taking a liking to her, and soon she finds herself on track to being the voice of the trailers for an upcoming, hotly anticipated Hunger Games-esque movie series. But she’s pitted against Sam and his protege, the douchey Gustav (Ken Marino).

Despite the novel backdrop, the movie doesn’t exploit the possibilities of that setting. One scene is set at a party for voice over actors, and the complete lack of any of them riffing with one another is rather disappointing.

More critical is the movie’s formless story. There’s a subplot about marital strife between Dani and her husband Moe (Rob Corddry) that’s completely disconnected from everything else that’s going on. The intriguing vein that Bell taps into about institutional sexism in Hollywood goes mostly unexplored. For long stretches of time, not much is being done to advance character or plot, which might be forgivable if those diversions were entertaining enough, but they usually aren’t.

This is the kind of comedy that relies on what I think of as faux-indie tomfoolery. Most of the jokes are predicated either on snark, situational awkwardness, or wacky clumsiness. It’s very hit-and-miss.

What really saves the film, though, is it’s cast. No one is extraordinary, but, crucially, you don’t wish to boot anyone out, which is impressive, considering how many bit players there are bouncing about. Watkins, Corddry, Marino, Nick Offerman, Tig Notaro (give that woman a leading role already), Alexandra Holden, and more all do a lot with a little. Bell is endearing and sympathetic. Melamed, though, is the true delight. Listening to him passive-aggressively alpha-male-bully everyone around him in his silky smooth voice is pretty great. If only he’d used the same soothing coo he did in A Serious Man.

In a World… is a lousy film about voiceover, a passable comedy, and a good date movie. It will gently settle into the undistinguished ranks of history’s perfectly okay works of art. I won’t sing it’s praises, but I don’t regret watching it either.