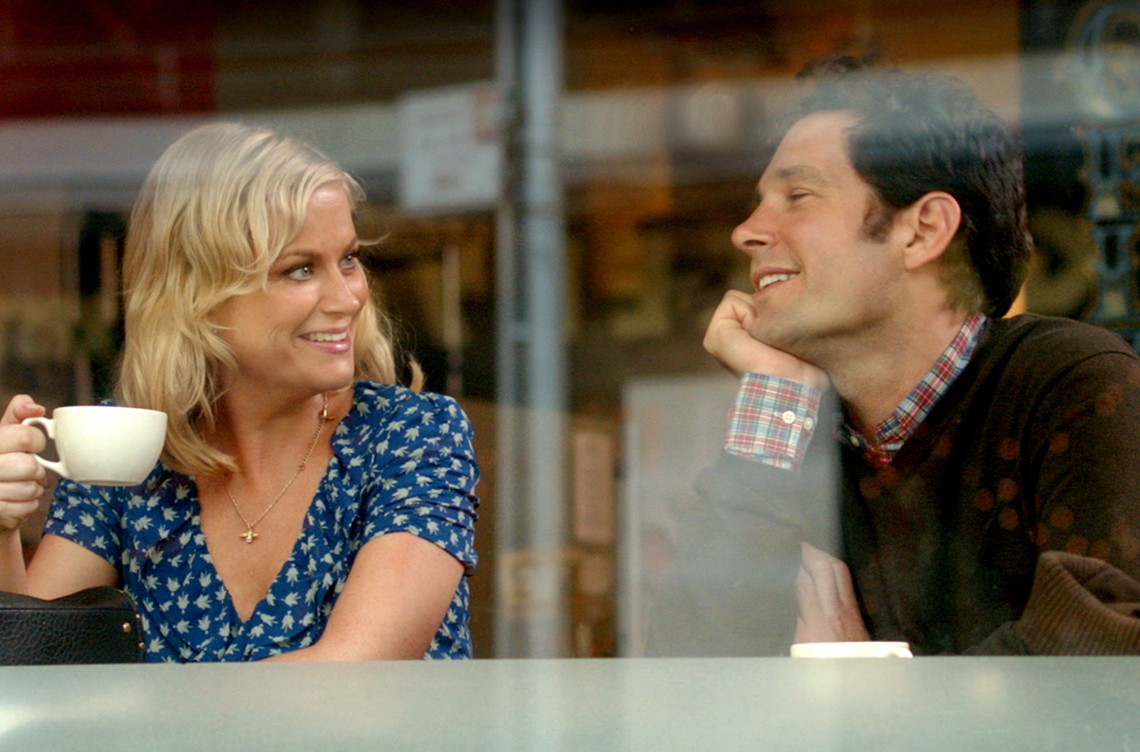 For over a decade, fans of the ludicrous summer-camp spoof movie Wet Hot American Summer have been waiting for the director/co-writer duo of David Wain and Michael Showalter to create a follow-up for their cult-classic comedy. Although we got fair enough substitutes — like the anthology comedy The Ten, the more heartwarming Role Models, and the hippie-themed Wanderlust –none matched Wet Hot‘s distinct brand of goofiness, surreal asides and interjections, and elements of genre parody.

13 years later comes They Came Together, a film which finally finds Wain and Showalter in full-blown Wet Hot American Summer mode. Only this time, they’re working against the conventions and tropes of the romantic comedy. They Came Together features Paul Rudd and Amy Poehler as New York city singles Joel and Molly, who hate each other at first sight, but grow to like and later fall in love with each other as they spend more time together. But oh no! Joel works at a huge candy corporation that could threaten to take down Molly’s quirky, indie, charity-donating candy shop! And Molly’s ex-con/ex-husband is nearing the end of his sentence! And what of her son, who loves Joel as if he were (or already, practically is?) his father?

It is within this Nora Ephron template that Wain and Showalter layer the film with the same kinds of absurd visual gags and odd interjections that made Wet Hot American Summer memorable. Joel and Molly bond over their shared love of fiction books (“I’ve never met anyone else who likes fiction!”), Molly performs the standard-issue dress up montage that instead ends up with her trying on a set of medieval armor, and Joel attempts venting his relationship issues to a repetitive bartender that brings their conversation into an infinite loop.

The rest is best left unspoiled, but it’s worth noting that while Wain and Showalter are clearly riffing on the genre and not doing much to elevate or even show respect to it, Rudd and Poehler have very sweet chemistry that would feel genuine in any conventional rom-com. Even when they’re putting Groucho-glasses on their own movie, their performances still have heart.

What keeps this from reaching the same level as Wet Hot is that the rom-com genre has a stricter set of rules to parody, as opposed to the more freeing tropes that the summer-camp movie allowed. So when those conventions eventually catch up with the goofier tone, it drags the movie down a bit. But even so, the jokes remain consistent and hit really hard, with great cameos from Wain-Showalter alumni and respected character actors alike. So no, it’s not the tightest spoof movie around, but you’ll laugh a lot. That’s worth something. 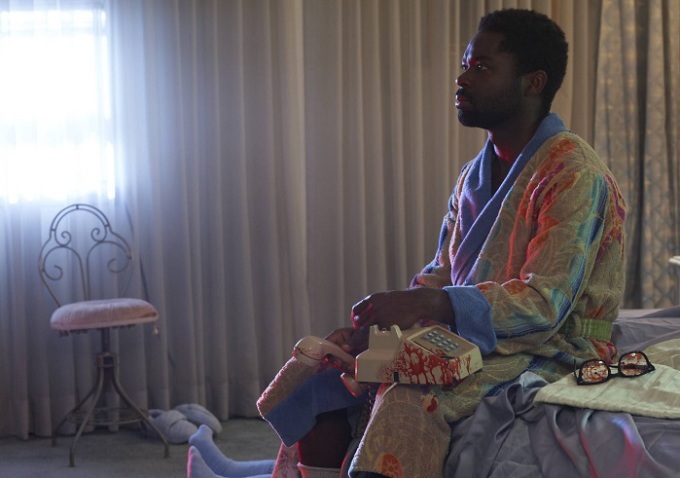 A one man show is usually only as good as the one man at the center of it all. That’s how I used to feel about movies acting like one man shows until I watched Elliott Lester’s Nightingale, which has a very striking performance from its leading man David Oyelowo, but sadly not much else to rise up to his level. Oyelowo plays Peter Snowden, who opens the film having just committed a vague crime that we do not learn the details of until later in the story. Wracked with guilt, he attempts to go about his daily life alone in his mother’s now abandoned house, popping pills and redecorating the rooms to help cope with his sins.

At first, it’s hard to get a good read on Oyelowo’s performance. For a while, I couldn’t tell whether or not his overtly theatrical way of speaking was a product of misjudged acting or an aspect of his character. However, Lester and his screenwriter Frederick Mensch slowly peel the layers back on Peter’s psychology to create a rich personality that’s only bolstered by how deeply Oyelowo dives into the role. Very religious, secretly homosexual, and desperate to live independently of his mother while at the same time deeply afraid of being all by himself, Oyelowo remarkably juggles a lot of Peter’s contradictory traits to create something three dimensional and human.

What’s unfortunate about Nightingale is that while Oyelowo brings this character to life, the script and direction by Mensch and Lester don’t do Snowden any favors. You’d think that having only one actor on screen for the entire running time would allow a filmmaker the excuse to really focus on quiet moments of subtle introspection, but almost the entirety of Nightingale is spent with Oyelowo either talking to somebody on the phone, talking to his webcam, or talking to himself. Talky movies are fine, but it feels as if Mensch thinks that the only way to communicate Peter’s complex issues is by having him spell them out loud for the audience, which is a real shame considering Oyelowo’s layered performance allows Peter’s more hidden nuances to shine through.

Meanwhile, Lester’s direction is purely functional, with hardly a flourish or meaningful use of color, lighting, or camera movement throughout the entire film. You almost wish Lester would go the Nicolas Winding Refn route of slathering the movie with indulgent style, because at least that would have been interesting. His camera merely observes, but never provides insight for his character or meaning to our own passive perspective. It soon becomes apparent that Oyelowo’s performance is all the movie has going for it. Otherwise, it feels utterly devoid of any substance.

Tom Hammock’s The Well is the kind of serviceable yet lovingly crafted indie genre picture you wish was made more often. Despite having a restrictive, limited budget, The Well gives us a traditional blockbuster story, but told with spareness, economy, intimacy, and a refreshingly DIY aesthetic.

The post-apocalyptic wasteland of The Well has been brought about by a massive drought that’s befallen the once prosperous Oregon farmlands, turning green fields into a massive stretch of desert. According to the opening titles, it hasn’t rained in years. Kendal (a breakout turn for Haley Lu Richardson) lives in an abandoned farmhouse with her boyfriend Dean (Booboo Stewart, which is an awesome name), who’s slowly dying of an illness that could spell death if he isn’t given regular water. Luckily for them, they have access to a special well that gives them more than enough to last. This gives Kendal time to scavenge the desert wasteland, searching for car parts that could help rebuild a dilapidated plane, and giving extra water to the less fortunate wanderers. However, Kendal and Dean’s desperate yet content living conditions are put in danger when a mysterious group of mercenaries starts gunning down the remaining settlements and starts draining water from everyone else’s wells. With their only source of water dwindling, Kendal is forced to venture forth and fight back.

While The Well‘s story is totally generic, it’s made with just the right sense of tone, atmosphere, and world-building. The film isn’t permeated with endless action sequences, nor is it a meditative art film. Instead, The Well focuses mostly on tension, as everything is given a ticking countdown. Water is in short supply, mercenaries and bandits can stop you in your tracks at any minute, and all of Kendal’s friends are being hunted down. While it’s clearly paying homage to all sorts of classic movies and genres (Mad Max style apocalypse movies, Eastwood-esque westerns, and even a dash of samurai films), Hammock’s desert wasteland feels more at home with post-apocalyptic video games, with the rusted, sandy look of Fallout: New Vegas mixed with the somber, desperate tone of The Last of Us.

The casting also goes a long way in bringing this world to life. Haley Lu Richardson as Kendal channels her inner Katniss Everdeen, playing a fierce, determined heroine who is constantly keeping her male counterpart alive. And unlike most apocalyptic movies with young female protagonists, there’s nary a rapey vibe in the whole movie! That’s largely thanks to its charismatic villains, who find ways to creep you out without needing to resort to those sorts of tactics. Jon Grier’s Carson has a quiet, mysterious allure that makes him a great counter to Kendal’s ferocity, and Michael McCartney has some fun as a shotgun-toting priest who solemnly asks his victims to confess before they’re pumped with lead. The only weak link is Nicole Fox as Carson’s daughter, who comes across underdeveloped…but boy can she handle a machete.

Hammock does a lot with his limited resources, shooting in the desert an hour and a half north of Los Angeles and in abandoned, dilapidated houses. This not only gives his low-budget movie a distinct, authentic look, but it forces him and his actors to make the most out of their sets, with a lot of the film focused more on suspenseful games of cat-and-mouse than action scenes. Unfortunately, when the action scenes do come, they underwhelm. They’re shot and choreographed well, but they’ve been cut to ribbons in the editing room, and it bears the unfortunate low-budget distinction of having really shoddy looking CG blood and fire effects. A shame considering the climax of the movie still manages to feel badass in spite of its technical hiccups.

The Well isn’t a groundbreaking discovery, but it’s a very effectively made genre film made with clear affection for the films Hammock and his co-writer Jacob Forman are riffing off of. Compared to a lot of these kinds of low-budget post-apocalypse movies, which you may typically find in the straight-to-DVD pile at your Target, The Well has a spark that lets it rise above the pack. 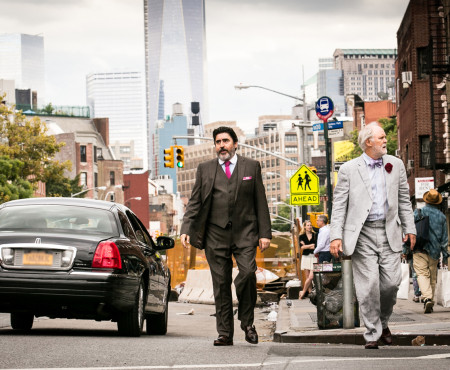