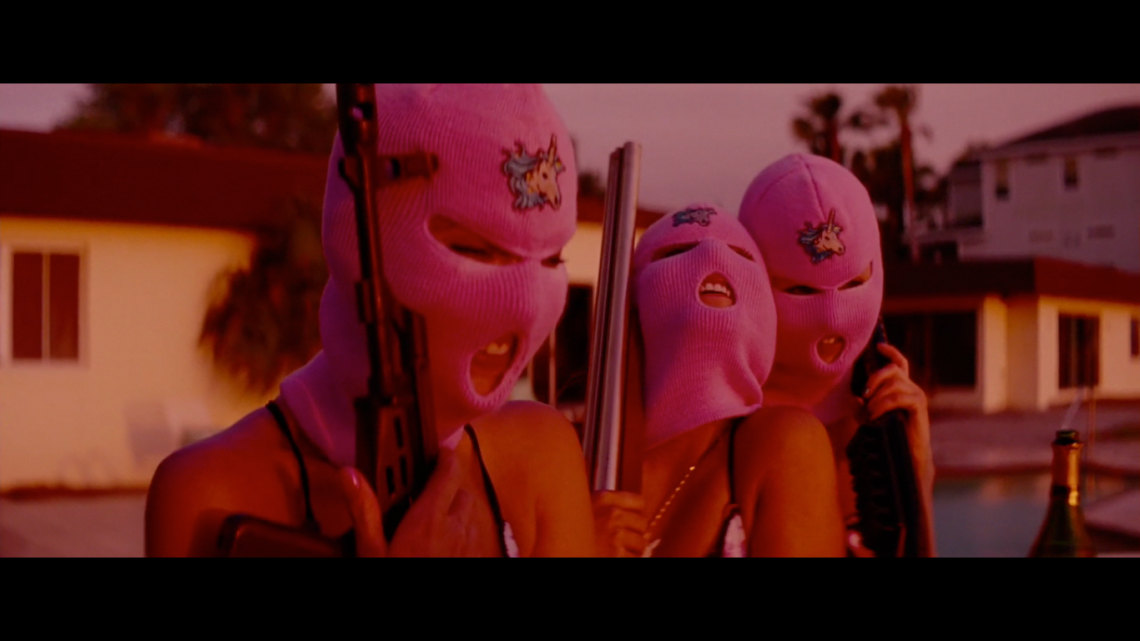 Korine’s Angels: The Ironic Harmony of “Everytime” and “Spring Breakers”

Songs in the Key of Cinema is a bi-weekly look at the use of songs in film. We’ll explore how a piece of music fits within the context of a film as a whole, and we’ll cover the moments in cinema that were music to our eyes and ears.

There were snickers in the audience when James Franco began warbling on screen, three balaclava-sporting young women surrounding him at the ivory piano. Such derisive, incredulous laughter is only justified if one hasn’t been investing their attention in what Harmony Korine’s madcap nightmare Spring Breakers has to say. When Britney Spears’s “Everytime” floods the speakers, it’s so gorgeous and alluring, the inherent sadness of the song subverted by playing it over horrific, dreamlike images of empowerment. It’s ironic and cynical and strangely powerful, and certainly one of the most captivating things about Korine’s hallucinatory treatise on youthful indulgence.

Off of Spears’s 2003 album In the Zone, her heartbreaking track “Everytime” was written as a response to Justin Timberlake’s “Cry Me a River,” both songs about their breakup. While “Cry Me a River” is sarcastic and scathing, its title a harsh call out at Spears, “Everytime” is far more sensitive. Timberlake’s song uses its anger regarding the relationship as a way to shield his vulnerability, but Spears is far more upfront with hers. “Everytime” is perhaps, first and foremost, an apology. Its music video consists of an exhausted Spears attempting to commit suicide in her hotel room, so fraught is she with sadness, hurt, and apology. Curiously, Timberlake’s dramatic (even melodramatic) use of synthesizers, beat box, and keyboard is juxtaposed against Spears very minimalist production, containing primarily a music box and a piano (with some light synth to flesh out the aural “landscape” of the song).

The scene begins at sunset, as Vanessa Hudgens, Ashley Benson, and Rachel Korine crowd around Alien’s (James Franco) piano. The three wear pink balaclavas, recalling Pussy Riot’s punkish prayer. One of them tells Franco to “play something, somethin’ sweet, somethin’ uplifting.” Another one says, “Play somethin’ fuckin’ inspiring.” Alien concedes, bestowing the title of “one of the greatest singers of all time” on Ms. Spears, “an angel if there ever was one on this earth”. Franco begins playing. And he’s off key. So yes, it’s kind of funny, or rather, it’s uncomfortable. The girls begin to sing along, but what begins as a quasi-campfire-sing-along becomes a ritual. The three join hands, err, guns, and dance around. And soon, a flurry of slow motion footage of the foursome wreaking havoc fills the screen, from a crashed wedding to an arcade holdup.

Snarkiness, despite its proliferation on the internet and even in film, is usually looked down on. Yet it’s that smirking quality of Harmony Korine’s work that makes him such an appealing director. It does not seem exactly self-indulgent, either. Behind that snarkiness, occasionally, is pure awe at whatever he happens to be observing or capturing, whether it’s the white trash of Gummo, the quaint celebrity impersonators of Mister Lonely, or the criminals in Spring Breakers.

Thus, playing Britney Spears’s breakup song is ironic, not only tonally but also lyrically. The lullaby-like sound of “Everytime” over images of young women (and James Franco) beating people up invokes both strange dark humor (certainly a trademark of Korine’s) and genuine concern. But the sweetness of “Everytime” does not compute with the violence of Spring Breakers, which feels like it belongs with a more conventionally pumped up track. Its music video quality is deliberate, and it ends up feeling both beautiful and terrifying. Cinematographer Benoît Debie (Enter the Void) plays up the entrancing quality of the song, allowing it to dictate some of his editing pivots.

Lyrically, though, Korine uses this moment to continue to push home his ideas of female agency that the film is steeped in. “Everytime” is by no means any kind of great feminist statement. It is about a woman who is sorry about her breakup, and who feels she cannot live without her ex-boyfriend. Its chorus is telling: “Everytime I try to fly I fall without my wings, I feel so small, I guess I need you baby”. While relationship turmoil is certainly fine, this narrator seems to explicitly suggest that without her ex, she is nothing and devoid of power. Spring Breakers refutes that idea.

Around halfway through the film, the film’s gender dynamics shift. Alien, whose street cred and ego allowed him to hold most of the power in the film, loses it to the girls, both sexually and ideologically. In this montage, they hold their own, pistol whipping a guy who’s tied up. They’re taking over, bit by bit. And before long, Alien is all but out of the picture. Just like the movie they always wanted to star in.

Using Britney Spears over a swath of violence is certainly strange, but it acts as an ingenious subversion of the assumption that a woman is beholden to a man if she wants to exert and exhibit her power. It’s done so nastily that it feels jarring, yet its hypnotic power further adds to the fever dream quality of Korine’s outstanding film. They’re no angels, but to suggest that they need to be would be missing the film’s point.