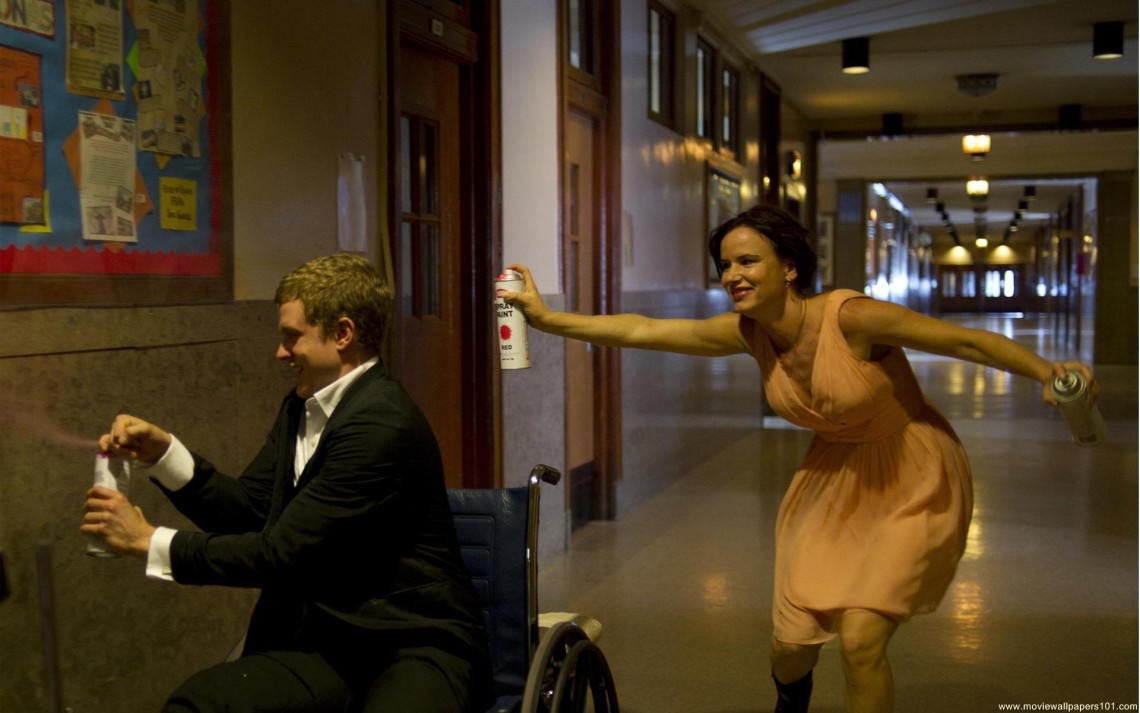 “Kelly & Cal” A Cozy Indie That Should’ve Been Pricklier

For those of us who came of age in the early 90s watching Juliette Lewis’ wackadoo wild-child performances –from Cape Fear to Natural Born Killers and beyond– it’s pretty much impossible to imagine her as somebody’s mom. The amusing central conceit of Kelly & Cal, a problematic but quite finely acted indie from first-time director Jen McGowan, is that Juliette Lewis is having a hard time seeing herself as a mother, too.

Six weeks after the birth of her son, Lewis’ Kelly is still suffering from post-partum depression, stays in her pajamas all day and can’t get the damn kid to stop crying. She’s recently moved to a sterile suburb, alone most of the time as her aloof husband (Josh Hopkins) is too overwhelmed by his vaguely defined corporate sellout advertising job to pay his wife and newborn much mind. In an early, very funny scene, he’s oblivious to her amorous advances because Battlebots is on TV, leaving Lewis to fend for herself – finding solace under the sheets with George Clooney’s Rolling Stone magazine cover. (George is gonna love this movie.)

It wasn’t always this way for Kelly, who once was a riot grrl in a band called Wet Nap: “like Sleater-Kinney, but with a bassist.” She’s ill-at-ease pushing a stroller around an antiseptic park where the local Mom’s Association makes you apply through a Facebook page for the privilege of their company. Kelly feels unattractive, unwanted and unfit for motherhood, until one day she’s sneaking a cigarette in her backyard when the teenage boy next door compliments her “great tits.”

Cal (Jonny Weston) is in a wheelchair, paralyzed after a recent fall from a water tower where he was trying to impress the girl of his dreams with a dopey daredevil stunt. He’s an angry kid, for understandable reasons, firing off all sorts of nihilistic bromides that sometimes he almost seems to believe. Kelly finds herself drawn to him, at first out of a misguided sense of pity that later blossoms into a disarming kinship.

Kelly is getting it from all sides at home, with her hubby’s overbearing mother (Cybill Shepherd) and harpie sister (Lucy Owen) dropping by, ostensibly “to help,” but mostly just passing judgment on the ragamuffin in-law they could never understand why their precious golden boy went and married. Shepherd excels at such Stepford-ian passive-aggression, it’s easy to see why Lewis dyes her hair blue, busts out the old combat boots, and seeks sanctuary in her young neighbor’s man-cave.

The best scenes in Kelly & Cal are long, deftly staged hangout sessions in the latter’s garage, where these two knock back beers and smoke butts, commiserating as misfit outsiders in this land of manicured lawns. Cal constantly, crudely hits on her, and Kelly revels in the inappropriate attention. She schools the youngster in ancient relics like cassette tapes and zines, both of them rocking out to Wet Nap’s greatest hit, “Moist Towelette,” an anthem performed by Lewis herself on the soundtrack, calling to mind the actress’ old band, Juliette and the Licks.

Lewis and Weston have a crackling chemistry that’s hardly chaste, hurtling over the characters’ seemingly prohibitive age difference in part because this 26-year-old actor is a good many things, but believable as a high school student is not one of them. Lewis has always brought with her a messy sexuality, and the unlikely friendship soon becomes fraught with an inappropriate will-they-or-won’t-they tension.

It’s a testament to Juliette Lewis and her sui generis screen presence that we spend the entire running time giving Kelly a pass for behavior that’s frankly rather monstrous. Lewis is not the kind of performer you can catch “acting,” often throwing herself so emotionally into roles that her slightly addled line readings sound not like words from a script, but instead things that just popped into her head for the first time and she’s not having an easy time at all getting them out.

So inherently vulnerable is Lewis that we’re quick to forgive Kelly for neglecting her family to bask in the adoration of a deeply wounded young man she’s probably harming more than she helps. Amy Lowe Starbin’s screenplay commendably confronts these ugly truths, while McGowan’s direction works at cross-purposes, sanding down the edges and slathering everything with a deeply unfortunate score by Toby Chu. When the going gets tough, Kelly & Cal lapses into a cozy, reassuring tone that is often at odds with the material.

There’s a pricklier, more difficult movie lurking underneath McGowan’s Sundance 101 polish. Like the recent Neighbors, this is really a story about the selfish panic of parenthood – the worry that you don’t get to be that cool person you were in your twenties anymore. Interesting how the big studio comedy is way harder on the characters for these sins than its indie movie counterpart. Capably shot and beautifully acted, Kelly & Cal is a pleasure to watch. But maybe it shouldn’t have been.