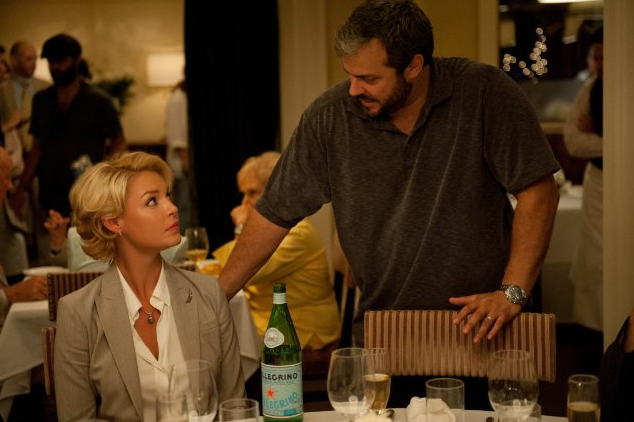 Hollywood rumor has it that Zackham wrote The Bucket List in two weeks, so when I got to interview the screenwriter — and first-time director — of course I had to ask how long The Big Wedding took. He laughed and said that reports of his speedy writing had been exaggerated. Even if the actual writing takes only a few weeks, he needs the lead-up brainstorming time: “I’m one of those people where, if I have three months to write a script, I kind of think about it, mess around, scribble notes for way too long beforehand—til I get to the point where I have way too much information in my head. I don’t really outline or anything, then it all comes out over the space of a couple weeks.”

To write a rom-com, especially one like The Big Wedding, you have to be a devotee of the genre. After all, the only slightly ludicrous plot — broken family pretends to be wildly happy to satisfy their adopted son’s biological mother for the impending nuptials — gains greater weight when you consider that it’s Robert De Niro and Diane Keaton playing the bittersweet divorcées. And Susan Sarandon, Robin Williams, Katherine Heigl, and plenty of other familiar faces rounding out the cast. Not only does Zackham wear his fandom proudly, but he cites influences like Nancy Meyers and Billy Wilder, and even specific films like Four Weddings and a Funeral—“any movie that sort of blends comedy with a certain amount of drama, where you wouldn’t just call it one or the other.”

What struck me about The Big Wedding was that it’s a better stab at the ensemble rom-com than a film like New Year’s Eve. What grants it a firmer foundation is that the movie employs a bit of fun shorthand in that each of the actors are portraying their archetypal rom-com characters: Keaton as the sexy sixtysomething, Heigl as the tough career woman, Amanda Seyfried as the blushing bride, and so on. Zackham confirmed my theory–to an extent, at least.

“It sort of happens that I’ll hear the actor’s voice in my head and write the character with their speech patterns,” he admitted. “Diane I wrote Ellie for, and with Bebe I had Susan Sarandon in mind. I would say that with The Bucket List I wrote the role of Carter with Morgan Freeman in my head, but you don’t really dare [hope you’ll get him]. I don’t really know why it happens with some roles more than others. I know I’ve been ridiculously lucky that I’ve gotten a lot of these people to do it.”

He did clarify, however, that he doesn’t love his tendency to automatically cast actors during the writing process. “Sometimes it helps, but sometimes it’s not great. There are some roles where I don’t want to cast such a specific actor in my mind, because I have too specific of an idea. I didn’t want to cast [De Niro’s character] Donald. I had him so clearly in my head as this artistic curmudgeon. He wants everyone to get along; but at the same time, at the slightest hint of conflict, he recoils. I knew a different version of that guy from growing up.”

Now, the wedding rom-com is a well-trod road. So what does Zackham think it is about weddings that make them such fodder for rom-coms? “Normal people, the minute you commit to a wedding situation, become raving lunatics. I got married and the wedding was perfect and all that, but there were some interesting moments in the lead-up to that, especially in that kind of a community where people are so concerned with appearances. One of the moments that I took from the Swiss film it’s based on is the moment at the dinner table where it starts to rain. They’re just sitting there for about a minute because no one wants to acknowledge the fact that it’s raining–because it shouldn’t be raining, God forbid.”

Zackham summed up his desire to write universal — but also dark characters — with a saying that he and his friends will often trade back and forth to ground themselves: “‘There’s no problem in our lives that people haven’t had before us or won’t have after us.’ There are things you take seriously. I think people take so many things seriously that aren’t that huge a deal.”

As for his next projects, Zackham is looking forward to the release of One Chance, which he wrote based on the true story of Paul Potts blowing everyone away with his heartfelt Britain’s Got Talent audition. Then Zackham is hard at work on TV pilot Jubilee: “Basically Upstairs/Downstairs or Downton Abbey set on a Georgia Southern Antebellum plantation before, during, and after the Civil War.” He promises that it’s “much more of a drama. The main cahracters are the planter family, and they’re also slaves, so it’s a very realistic look at what life in that kind of a microcosm was actually like.”