KITSCH, noun. /kiCH/. 1. art, objects, or design considered to be in poor taste because of excessive garishness or sentimentality, but sometimes appreciated in an ironic or knowing way.

That’s what Clint Eastwood’s films are becoming. Kitsch. Jersey Boys – which the ultimate American auteur directs about as anonymously as anything he’s ever made before – cements that. Sure, Eastwood’s able to visually compose the film version of this jukebox musical quite competently, and the editing is able to create a rhythm that audiences in search of bland entertainment are going to find amiable enough. (This movie’s going to be a hit.) But he’s not able to save it from its own accidental-camp Jersey Shore goofiness. In the public eye, that talking-to-the-chair bit at the Republican National Convention got Eastwood written off as a serious personality. In the cinema, this film might do the same.

We’ll get to those particularly misjudged moments later, though. Let’s start where the movie does: it’s 1951 in New Jersey, and Tommy DeVito (Vincent Piazza) is walking us through the neighborhood, talking into the frame as he goes, Goodfellas-gone-suburban. The rest of the Four Seasons (“Sherri,” Franki Valli, look them up if you need to) all get their chance to do so across the swath of this generations-spanning melodrama, which crosses from their teenage years (run-ins with girls and a mobster played by Christopher Walken) through their 60s successes (run-ins with girls and a mobster played by Christopher Walken) Bumper-sticker statements like “You don’t know Jersey” and sitcom-level banter like “I’m gonna be as big as Sinatra” / “Only if you stand on a chair” is bandied about. Fights are had. Fame is won and lost. Songs are sung.

Eastwood directs with his typical sure eye – shadows are evocatively placed consistently; there’s a rhythm to the crew’s arguments mirrored in the editing, which isn’t afraid to hang on a reaction instead of showing us who’s talking; and the longer shots give us many different points of interest across the 2.35 frame. Take a look at one middle-of-the-movie scene, where the four argue over a mob debt in Walken’s house, for one example of how well Eastwood can create emotional separations and alignments via blocking and editing. But what ends is this direction working toward? Nothing too interesting. Sure, it feels right when he cuts to a very-rare insert-close-up the moment the group begins to splinter (a shattered glass, duh). Yet what does that craftsmanship count for when the content he’s directing is so laughable, so insignificant, so uninterested in anything other than its own slickness? (We haven’t even mentioned a funeral scene set to “My Eyes Adored You,” cut to, framed, and presented for either peak campiness or manipulative shamelessness, depending on your point of view.) 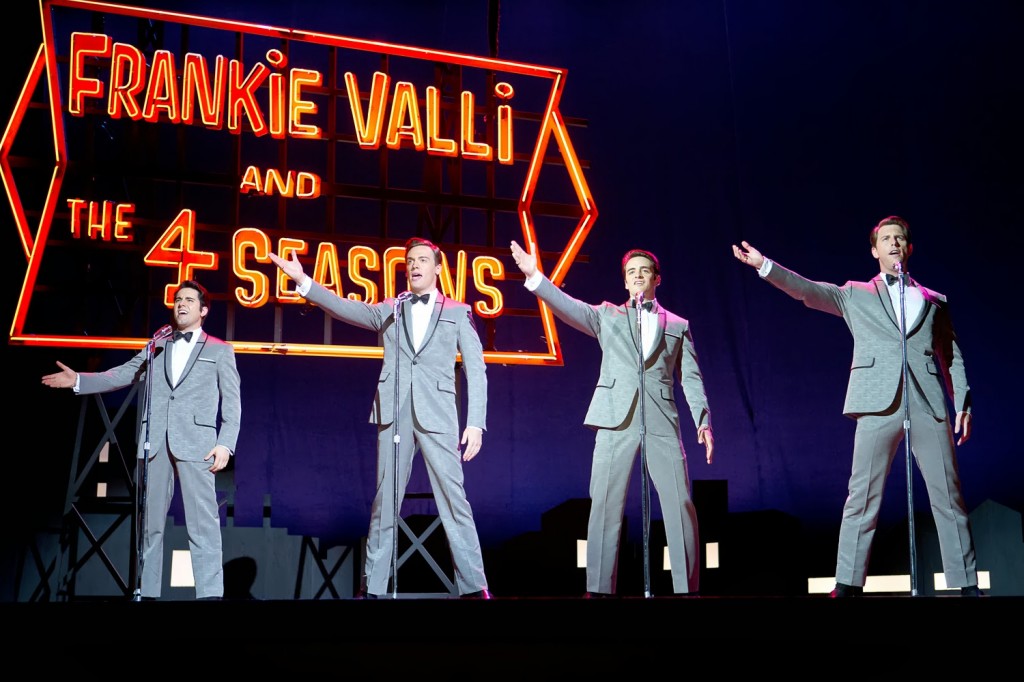 What does Eastwood care about here? It can’t be an interest in making a musical, because Jersey Boys isn’t a musical; it’s not stylized that way. His interest couldn’t have been in how hard living ripped up these men’s personal lives, because we see nothing of their wives and families. All the script gives us are meet-cutes followed by long ellipses followed by breakup scenes. It can’t be capturing a particular moment or feeling of 50s- or 60s-era America, because everything always looks the same and the timeline seems quite purposefully muddled to mask the fact that the pretty-boy actors (particularly John Lloyd Young as frontman Valli) hardly age across 20 years. It can’t be the music either, since the film never presents these men as artists; their writing process is essentially made fun of (“Sherry” is literally dashed off, written while a character is running somewhere) and commerce is the focus of all their discussions. If anything, this script just deigns to always turn to the juiciest moments of gossip, those breakups and drugs and mob run-ins – it’s just like a Peter Biskind book. It’s hard to believe Eastwood has that much of a vested interest in anything here other than box office receipts. Here’s a jukebox with no records in it.

An instance of anonymous authorship: Mike Doyle plays the Seasons’ producer, Bob Crewe, as the swishiest gay man who ever did swish. Eastwood accentuates it, even dropping a silent young-boy extra into the middle of one composition for laughs. The script and editing are just as bad: one of the band’s boys is written to be the target of Crewe’s affections, and when that particular bandmate finally loses his virginity, “Walk Like a Man” blares over the triumphant moment. Admittedly, Clint’s pretty much beyond reproach in regards to representation and depiction: his art is not that of a homophobe, or a misogynist, or of any such repressive ideology. Yet even if stereotypes have snuck into his films fairly often, he’s never written off a character like this so crassly. That’s what makes the cheap reduction here so annoying; it flies in the face of a progressive, inclusive worldview Eastwood’s spent 40 years expousing in film-after-film (if not in his personal life). The Outlaw Josey Wales this isn’t.

Someday, years from now – probably in France – a full retrospective of Clint Eastwood’s directorial works will happen. As we do when we attend these things, we’ll break the works down into categories and boxes. We’ll talk about the almost-grindhouse projects (The Gauntlet, Play Misty for Me,) we’ll talk about the Westerns, and we’ll talk about those years when he went all Sergio Leone on us (Unforgiven and A Perfect World, mostly). Then we’ll get to the late years – the years with slips and embarrassments. The years with Invictus and its on-the-nose music cues, with J. Edgar and its badly-made-up queens wrestling each other unconvincingly on the floor, with Jersey Boys and its Joe Pesci character spouting off catchphrases like “funny how?” as if this were a first-year film student’s overly-referential first-draft screenplay. We’ll call these the kitsch years.