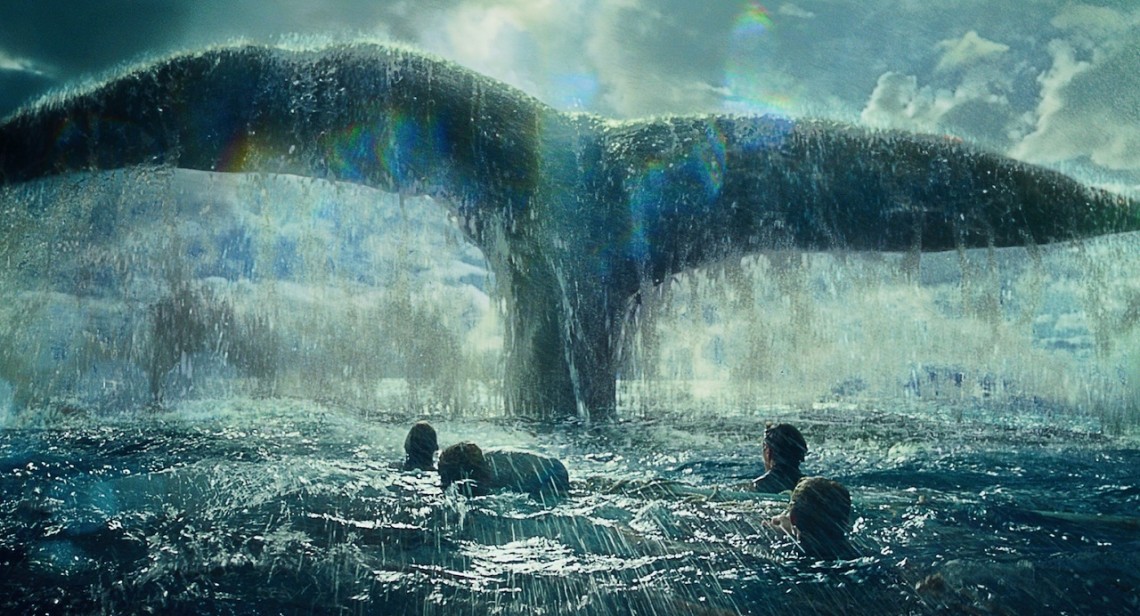 “In the Heart of the Sea” Doesn’t Know Dick

In the Heart of the Sea doesn’t get to the heart of much. In fact, Ron Howard’s seafaring adventure is as confused a picture as I’ve seen in quite some time. Adapted from Nathaniel Philbrick’s 2000 best-seller about the sinking of the whaleship Essex, the film is selling itself as the real-life whale of a tale (sorry) that inspired Herman Melville’s Moby Dick.

To that end, Howard and screenwriter Charles Leavitt (K-Pax, Seventh Son) employ a horrifically clunky, totally made-up framing device with Melville himself played by Ben Whishaw, traveling to Nantucket in 1850 so he can interview Thomas Nickerson, the last survivor of the Essex.  Played in these sequences as a despondent old salt by Brendan Gleeson, Nickerson is not exactly one to reminisce about such an ordeal. After much wasted screen time regarding the not-yet-invented virtues of talk-therapy, we eventually find our way back to 1820 when the Essex set sail.

Chris Hemsworth stars as first mate Owen Chase, the hearty man’s man rightfully deserving yet denied captainship because he’s just a poor boy from a poor family. Benjamin Walker is Captain George Pollard Jr, an effete bore of exquisite breeding and snobbery. The stage would appear to be set for a Mutiny on the Bounty battle of wills, or maybe something akin to Howard’s last picture — the surprisingly sexy Formula One drama Rush, which also starred Hemsworth as a hotshot butting heads with his betters.

But this thread, like so many others in the film, is eventually tossed aside as the ship faces the wrath of a gi-normous sperm whale in what must have been very expensive yet entirely unimpressive CGI action sequences. The shockingly awful cinematography by digital pioneer Anthony Dod Mantle is so processed and worked over with inky, sickly filters from the get-go that nothing on-screen here bears even a passing resemblance to reality. In the Heart of the Sea is so full of unnecessary and unconvincing green-screen work I wouldn’t be surprised if most of the actors shot their scenes on a soundstage in Burbank. It’s one thing to not believe these folks are running around a boat during a storm, it’s another not to believe that they’re even having dinner in Nantucket.

The action in the film is all front-loaded, so the second half becomes one of those survivalist endurance tests where everyone’s on lifeboats with scurvy growing bushy beards and showing off how much weight they lost for the project. In case you didn’t get enough of this stuff in last year’s Unbroken, here’s some more misery as the men must do the unthinkable to survive. (In the Heart of the Sea joins Dahmer, Under the Skin, and Snowpiercer in that weirdly crowded sub-genre:  Movies in which members of The Avengers eat people.)

Another huge problem is that we’re seeing this all through the eyes of the story’s least interesting character. The young Nickerson (played by Tom Holland, soon to be seen as your new Spider-Man because they’re just gonna keep re-booting those whether you want to see them or not, dammit) doesn’t do much besides sit around on the sidelines. In the Heart of the Sea keeps obnoxiously insisting that it’s the story inspired Melville, but nowhere here will you find the insights into obsession and humanity that made his book a classic. The movie doesn’t know Dick.