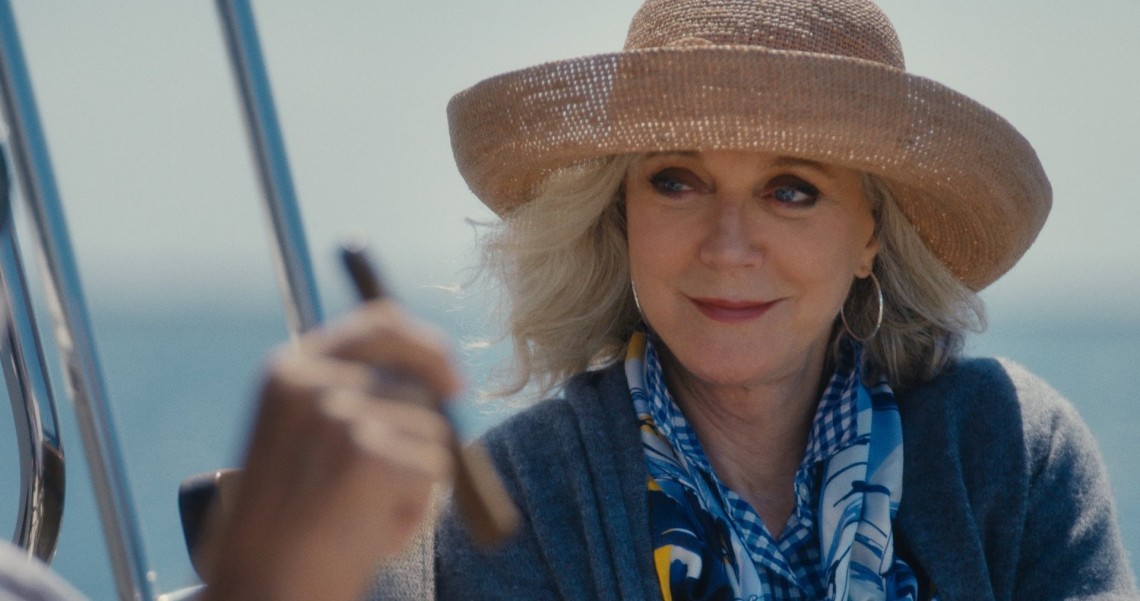 “I’ll See You in My Dreams”

It’s the same story at the top of every summer. Despite small but noticeable steps from Hollywood, summer screens from coast to coast still cater largely to the desires of the young male demographic, with superheroes, busy action vehicles (and maybe a couple of heroines in both buckets if we’re lucky) sketched to kick some ass, burst some ear vessels, and win big at the box office. And in the midst of this loud frenzy of blockbusters, real-life heroines—like the 70-something ex-singer and retired schoolteacher Carol Petersen (Blythe Danner) of I’ll See You In My Dreams—are very welcome, if not desperately craved, exceptions to the norm. With its sensibility firmly tapped into authentic human life and experience, Brett Haley’s I’ll See You In My Dreams reaches deep into one’s core, shining its sweetly quiet demeanor and modest scale. All that, and the film, anchored by a refined lead performance by Danner, awes and inspires its audience in a genuine, soulful way and makes one feel like a million bucks without the need of a grandiose budget.

Gracefully portrayed by Danner in a performance that masters the art of subtlety and finesse, Carol isn’t your typical, run-of-the-mill “old woman” we often see in American film—the kind that is usually marginalized as someone’s nagging parent, used either as emotional bait or belittled as comedic relief. On the contrary, Carol’s aura, like her outfits and hair style, seems timeless. Similarly, her internal struggle, such as worrying that all her accomplishments are referred to in “past tense,” evokes tremendous pathos and proves to be ageless. In her self sufficient, no-nonsense life, the longtime widow spends her days in her polished, chic clothes, drinking wine, and playing golf and cards with her friends (a fabulous bunch of ladies consisting of June Squibb, Rhea Perlman, and Mary Kay Place).

Early on in the film, Carol’s functional life takes a hit with the death of her dog Hazel, as well as the unexpected arrival of a young pool cleaner, Lloyd (an instantly likeable, shyly reserved Martin Starr). Sharing a few friendly glasses of wine and a common interest in music, Lloyd and Carol find a rare kind of connection in each other which toys with the idea of romance but only to elegantly digress from it later on for something more profound and significant. Meanwhile, Bill, the hottest bachelor of the ladies’ retirement community (a handsomely mustached Sam Elliot, with a cigar permanently tucked between his lips), takes an interest in Carol and enchants her with his live-in-the moment ways. Not having been with anyone since her husband’s death—and after a hilariously unsuccessful speed-dating experience—Carol welcomes Bill in her life, with a healthy balance of reluctance and intense curiosity.

There are moments in I’ll See You In My Dreams in which Carol resembles the American version of Gloria, the titular central character of Sebastián Lelio’s glorious 2013 Chilean film. Both women embrace their age, yet they also indulge in their sexual desires and a fulfilling routine that doesn’t have to involve womanly nurturing or motherly sacrifices. But saying that Carol and Gloria are relevant subjects only to a certain age group is too myopic a view that doesn’t do either character any justice. Such narrow-mindedness from studios and audiences also backhandedly explains why older women are often not allowed to have a life on film screens. Be assured that the varied experiences (and one hilarious sequence of pot smoking and subsequent “snack” shopping) of Carol and her friends aren’t any less interesting, charming, universal, or desirable than those of the characters from the Sex & The City television series, nor are they any less valid.

Like the richest of the stories, the co-writers of I’ll See You In My Dreams, Brett Haley and Marc Basch, manage to find complexity and earnestness in the quotidian, and discover honesty and humor even in the most awkward of situations. The spirited observances and performances imbue the film with an earned and irresistible earnestness. I didn’t want this film to end—and, like Lloyd, I just wanted to hang out with Carol over karaoke and a few drinks.

One thought on ““I’ll See You in My Dreams””