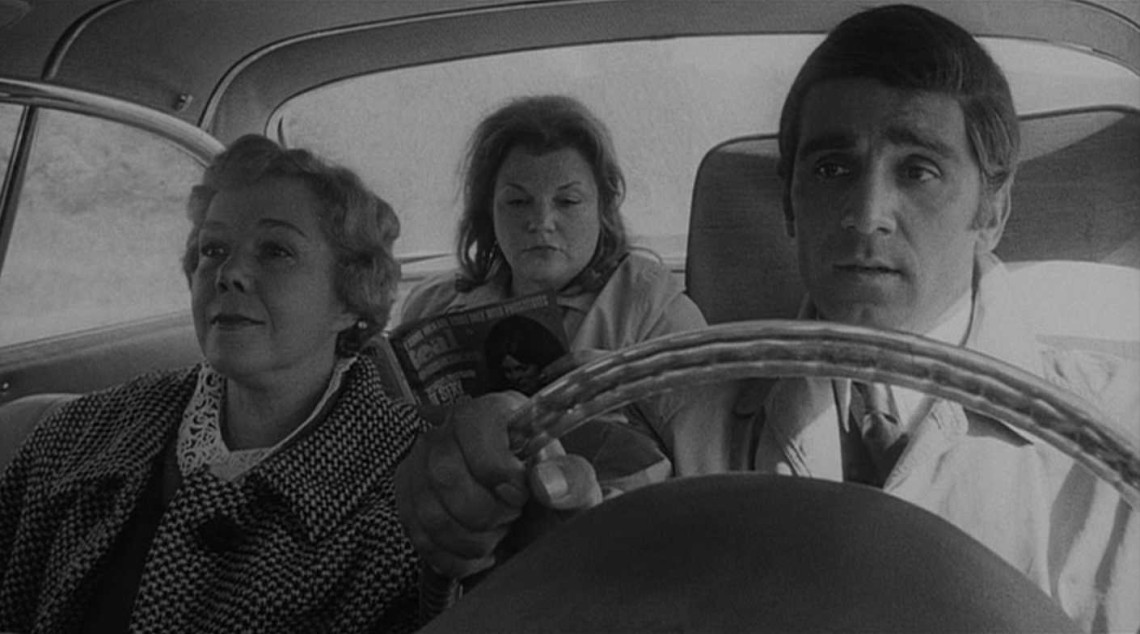 The Honeymoon Killers is the kind of title that hints at sensational thrills, a promise true crime movies usually fulfill. The genre enables audiences to engage in voyeuristic pleasures; it reminds them that the terrible scenes they are witnessing are not mere fiction, but reenactment of a reality which, thankfully, the spectators might never have to endure. The Honeymoon Killers, however, moves beyond this temporary high. Watching the film can leave viewers feeling decidedly unclean, for the murderers are anything but defiant. They are, for the most part, pathetic citizens of a disconnected world, clinging to a toxic love story.

Unlike their glamorous counterparts in Double Indemnity (1944) or Bonnie and Clyde (1967), the tainted lovers in The Honeymoon Killers are two ordinary souls. Martha (Shirley Stoler), who works as a nurse in the hospital by day and buries herself in women’s magazines by night, has the face of someone who is ready to give up all of life’s hopes. She hisses at couples and kicks children’s toys, yet lights up when her friend convinces her to write to a dating service, hoping that she’ll soon meet somebody who overlooks her bitterness and her “being on the heavy side.” That person is Raymond Fernandez (Tony Lo Bianco), first introduced in a shiny, exotic bathrobe, an indication of a possible exciting future for Martha outside her suffocating Southern hometown. Sadly, the poor woman finds out that Raymond is in fact scamming rich women through the dating service. Rather than going back to her empty life, Martha accepts Raymond’s sordid behaviors and the mismatched couple, posing as siblings, embark on a desperate ride filled with lies and murders.

In an interview included in the Criterion release, director Leonard Kastle shared that he originally wanted to name his only feature as Dear Martha, rather than the more exploitive The Honeymoon Killers that the studio imposed. The film’s story indeed begins and closes with Raymond’s letter to Martha, but more importantly, it is a poignant examination of urban relationships. Loneliness carries the stigma of shame and The Honeymoon Killers is populated with people trapped in their own paradox of solitude, craving human connection yet too timid to hold out their hands. At one point, as the couple settles down in Long Island, Raymond restlessly points his fingers to the window and compares suburban living to jail cells. Everyone is entirely disconnected, separated by their own front lawns. The sequence that shows the letters between Raymond and Martha is especially important, as it demonstrates that the lonely-hearts club might be the only path to modern love. While the content of their first correspondence is narrated in its entirety by the characters, as more letters appear onscreen, the editing pace gradually turns frenetic to the point where only half of the first sentences can be heard, as if the couple is breathlessly consumed by their desires to connect. Their victims share the same need, even though they have diverse backgrounds, from a soldier’s widow, a single mother and a senile Catholic lady. America in The Honeymoon Killers is a dirty, lonely place, where desires are rarely satisfied and often abused.

Filmed in a documentary style, The Honeymoon Killers is punctuated with an urgent score, mixing the real with the melodramatic. The camera wanders after the characters’ movements before closing in on their facial expressions, which range from ecstatic to harrowing. Despite the heavy subjects, the film has moments of dark humor, such as when Martha and Raymond trick a victim into taking a shower while they themselves have sex in the next room. While it is tempting to laugh at the foolish women that fall under the couple’s spell, their doomed fates force viewers to look at the harsh reality of an urban world, where female sexuality is not only shamed but also punished.

The transfer brilliantly captures the starkness of The Honeymoon Killers’ world. As the film frequently ditches conventionally framed shots for the extreme, the contrast between low and high angles, outdoor and indoor scenes is effectively rendered in this release, pulling viewers deep into Martha and Raymond’s haunting exploits. Draped over the immaculate cinematography is the beautifully restored soundtrack, which intermittently appears throughout the film to create a sense of tension as the couple moves from one state of emotions to another.

The supplements of this Criterion release provide crucial contexts to the film’s events. Besides a 2003 conversation with Kastle, the disc also includes a new interview with actors Tony Lo Bianco, Marilyn Chris and editor Stan Warnow, as well as a video essay titled “Dear Martha,” where Scott Christianson discusses the real-life figures on whom the film is based. On the disc’s sleeve, which is cleverly designed as a vintage newspaper spread, is an essay by critic Gary Giddins, which thematically pinpoints on the almost disgusting pleasure of watching the film.