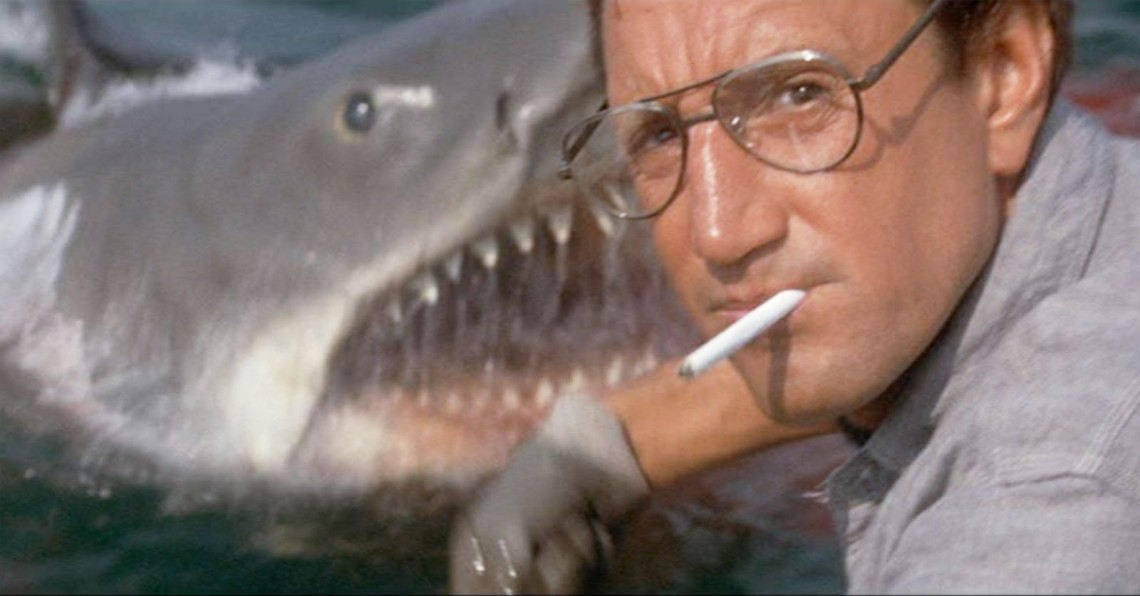 Editor’s note: Jaws is one of the 10 best films of the 1970s voted on by staff, friends, and readers of Movie Mezzanine. For the sake of surprise, we’ll wait to reveal where this and every other film ranks on the list until the very end. We hope you enjoy.

Steven Spielberg’s Jaws – like many seminal films – is remembered in moments and legacies. We remember moments that range from the horrifying sound of a woman’s gurgled scream as she disappears into an ocean, to the poignancy of a son making faces with his father. We remember legacies like Jaws scaring people out of the water, the filmmakers it inspired, the decades worth of “scariest movies of all time” placements, and (for better or worse) the movie’s responsibility for birthing the modern blockbuster.

For the last several years, there’s a series of moments that increasingly stand out every time I re-watch Jaws: the Orca – with Quint, Brody and Hooper aboard – heading out to sea, ominously framed by Spielberg so that it looks like it’s being swallowed by the gaping skeletal jaw of a shark hanging in Quint’s home. What you would generally expect with that shot is a menacing sustained note or two from John Williams’ score to aid the foreshadowing image. Instead, that shot cuts to the Orca puttering along, and Williams – free from two-note rumbles – lets the music build, swell, and breathe out an upbeat ditty that makes Jaws feel like it’s almost skipping or letting out a held breath. Those moments have become increasingly significant to me because they mark the turning point for Jaws becoming something slightly different in its second half. Specifically, something a lot more fun.

It’s not that Jaws isn’t fun in its first half. It is, though in more of a rollercoaster way – enjoyment derived from tension and fear, interspersed with brief breathers to allow nerve-relieving chuckles and smiles. Yet every time I watch Jaws now, it strikes me that the second half of the film isn’t just the best part, it’s the one Spielberg is most excited about. It’s easy to say that because of our knowledge of Spielberg’s post-Jaws modus operandi, which Ed Howard (Slant Magazine) perfectly captures:

“… free-wheeling masculine adventure winds through much of Spielberg’s work. It’s a key aspect of Jaws that goes hand-in-hand with its horror: the almost boyish sense of wonder that’s so recognizable in so many of Spielberg’s films and that crops up here in the way he celebrates the heroic expedition to catch the shark… Spielberg wants us to be scared by his film, but he also wants us to be awed and excited.”

That to me is Jaws. And that to me is what revs up in that moment where the three men head out to sea to hunt down the great white. And in the awe and excitement Howard describes also lies a legacy for which I’m not sure the film gets enough credit. Yes, the movie spawned the modern blockbuster as a style and production model, but it also encouraged the distinct sense of fun they can possess. Great blockbusters like Jaws are propelled by pervading destructive threats that are nonetheless rooted in a sense of fun. We enjoy experiencing them in the same way we enjoy Quint, Brody and Hooper (along with Williams’ rousing score) chasing the shark. Because we’re meant to. Spielberg may not have pioneered creating a safe space for audiences to derive pleasure from dangerous adventures, but he certainly popularized it, and in the process it became something that was passed on to later generations of blockbusters.

The value of that legacy seems almost nostalgic now, considering that modern blockbusters bear little resemble to their sharky cinematic grandfather (as The New York Times Magazine humorously pointed out). What’s worse, films like Man of Steel demonstrate a trend where movie spectacles are increasingly abandoning the sense of fun that’s so welcoming and enjoyable in Jaws and many of the big-budget spectacles that followed it. Maybe that’s why the moment the Orca sets out to sea increasingly stands out to me. It’s not just that it signals a moment where I get excited for everything that awaits in the movies’ second half. It signals a moment I should learn to cherish because I rarely get them anymore in modern blockbusters, which would do well to take a bit of advice from Chief Brody: “Smile, you son of a bitch.”