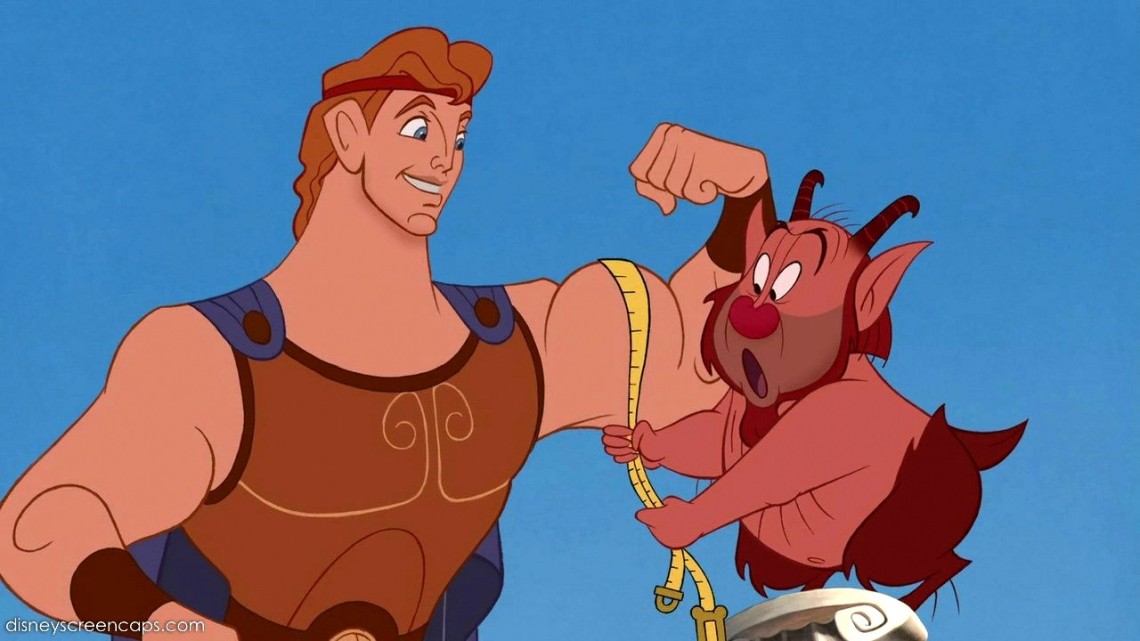 Hercules has become, inexplicably, something of a forgotten film in the Disney Renaissance (along with the other 90s-era Blu-ray release from Disney this week, Tarzan). This take on Greek mythology performed decently in the summer of 1997, but aside from the eponymous hero’s anthem “Go The Distance,” little of the film has made much of an impact in the intervening years. Part of the problem is that Hercules had the misfortune of opening at the tail end of Disney’s most transformative and major animation period. Like its predecessors, there are tons of Broadway-style songs; talking animals who provide comic relief; a larger-than-life character voiced by a fast-talking and well-known star; and so on. It’s difficult to blame people for forgetting Hercules, if only because it’s so much like Disney’s other, more widely beloved animated stories.

But it’s still a damn shame, because Hercules is a lot better than its reputation. Though he has, in recent years, transitioned into being a pushy, obnoxious, conservative, social-media-literate celeb, James Woods gives one of his best performances here as Hades, the hyper-intelligent, hyperactive, and furious Lord of the Underworld who just wants to take over the world of humans as well as the world of the gods. If only this chowderhead Hercules would get out of his way.Tate Donovan’s Hercules is a more modern, bright-eyed, easily swayed good guy who lets his initial celebrity get to his head once he downs a demon or two. (“But I’m…I’m an action figure!” he pleads to his father, Zeus, at one point.) The animation, something akin to a mythological take on Looney Tunes, is less detailed or vibrant than other Disney Renaissance films, but its charm lies more in the fast-paced script than the visuals. (Still, the setpiece where Hercules fends off the Hydra, a mix of computer and hand-drawn animation, has transitioned to HD fairly well.)

Woods is the highlight, though Susan Egan, as Hercules’ initially unwilling love interest Megara, was something of a find back in the 1990s. (That is, for those who weren’t familiar with her work as the original Belle in the Broadway edition of Beauty and the Beast. Megara, at least, is a much different heroine than Belle, more complex and prickly.) Not all elements of Hercules work, such as Danny DeVito’s grouchy trainer Philoctetes, but the film is wittier and more clever than John Musker and Ron Clements’ previous film, Aladdin. No doubt, some of it’s a bit era-specific—casting Paul Shaffer as a hip, musical god would probably not happen today—but Woods’ Hollywood-agent take on Hades, a schmoozer who can’t get what he wants, is more than enough to recommend a revisitation.

There are fewer pitfalls with transferring a Disney Renaissance-era animated film to HD than with something older such as The Sword in the Stone. (The less said about that unfortunate upgrade, the better.) So it’s not surprising that Hercules has made the leap to Blu-ray quite well in terms of its look and sound. Hercules is, in its character design, much more stylized but no less colorful than the other Disney Renaissance films. As such, the video is appropriately stellar, even in subtler moments such as Hercules’ visual transition from god to human, and from human to a near-member of the undead. The audio is of equally high quality, the songs as well as the snappy dialogue booming through crisply.

If you’re remotely familiar with Disney’s Blu-ray strategy over the last few years, you won’t be surprised to learn that there are no new extras on Hercules. Even worse, unlike the Tarzan release today, there are only three standard-definition special features on this disc: a sing-along of one song, “From Zero to Hero”; a Spanish-language music video for “Go The Distance” featuring Ricky Martin roughly a year before he lived la vida loca; and a standard-issue behind-the-scenes featurette that’s barely longer than those two musical extras combined.

Again, this is par for the course for catalog films from Walt Disney Animation Studios being released in HD: there are few, if any, with new special features attached. It’s still disappointing, nonetheless, to see one of the Disney Renaissance pictures given such a bare-bones release. Yes, it’s true that the previous DVD for Hercules was similarly light on special features, but does that mean someone at Disney couldn’t have funded a new look back at this 1997 feature? How about an audio commentary? Either way, as it goes for most catalog releases, if you’re buying this movie, you’re buying it just for the movie, nothing else.

If you’re a Disney animation aficionado or in the mood for a lighter take on a figure of myth, the Hercules Blu-ray is worth it. Just don’t expect anything interesting in the supplements.

Region A // Buy at Amazon