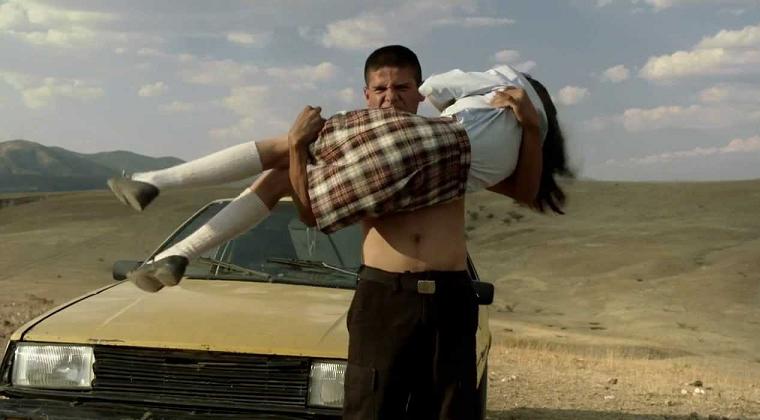 Around Heli‘s halfway mark, you may begin to feel alienated by its frank depictions of violence. The film slow-burns its way through the mundane comings and goings of an ordinary life that’s primarily defined by economic struggle (with a side of marital strife); our only hint of the awful fate that awaits the protagonist of the title, as well as his family, comes in its unsettling opening scene, a public hanging shot in a series of medium-length unbroken passages. We don’t encounter the grim violence of that sequence again until 40 minutes have gone by, and the reintroduction of cruelty jolts us from our seats.

But if Heli‘s brutality makes us feel wholly detached from the world in which those barbarisms occur, that’s probably the point. The film’s cast of primary characters exist on a plane that only resembles our own in passing. Basic details remain the same; people watch dinner in front of the TV, children go to school, and the adults go to work. But the broader and more nuanced qualities of Heli‘s backdrop vary wildly from our own. Most of us don’t live in fear of having our doors smashed in and our realities viciously turned upside down by the bloody ebb and flow of the drug trade. So the dispassionate lens through which Mexican filmmaker Amat Escalante captures Heli‘s events makes sense; the Mexico he portrays here is coolly unforgiving at best, and gruesomely nihilistic at worst.

The film concerns itself with Heli (Armando Espitia), a young man of 17 making a home with his wife Sabrina (Linda González), their baby son Santiago, Heli’s kid sister Estela (Andrea Vergara), and their father Evaristo (Ramón Álvaraez). Living in cramped quarters with one another, they eke out an existence as Heli and Evaristo make ends meet through factory jobs, while Sabrina minds Santiago. Adorably naive Estela has an older boyfriend, police cadet Beto (Juan Eduardo Palacios), who she idyls with in between her classes. It’s through their relationship that trouble comes to the family’s door; Beto convinces Estela to run away with him, based on a ploy to sell packages of cocaine he happened to discover innocuously lying  around a junkyard.

If you’ve seen any one of the many recent films that have flirted with the drug cartels’ gory iconography – Savages, The Counselor, or last year’s outstanding Narco Cultura – you can guess what happens next, and it’s appallingly ugly. Escalante takes no measures to sugarcoat atrocity, instead adopting as blunt an aesthetic as possible through numerous reenactments of myriad forms of torture; people are either gunned down or bludgeoned with cricket bats, men have their genitals set on fire, women are raped off screen, and even Estela’s cute little dog has his neck twisted like a pepper mill. It’s horrific. It’s revolting. It’s real, and that will be the dividing line between Heli‘s admirers and its detractors.

Except that there’s really nothing to be divided on. Escalante neither delights nor revels in suffering. To him, it’s a grotesque affliction, nothing to scoff at or sculpt into gripping entertainment; he’s more than adept at getting his claws into his viewers, but he abhors the inhumanity that makes its way through his film’s frames. He’s disgusted by it. Most importantly, he wants his patrons to feel the same way, so to write Heli off on the basis of its unflinching violence is to spectacularly miss the point. You should be repulsed by what Heli and his family go through. You should be angry.

There’s no refuge for the common man to take in Mexico’s ongoing drug wars. You’re as likely to be crushed by the corrupt overzealous brutes parading as military as cast aside by unconcerned lawmen and women. Heli paints a sobering, hopeless picture of that conflict, and of the ordinary people who wind up caught in its teeth. Their only recourse is to lash out in kind, and Escalante’s impressively patient craftsmanship and aesthetic sense – poetic, lilting, eerily silent – make the total experience all the more visceral for us. The cartel transgressions he documents here are ripping Mexico apart (and have done so for years); maybe Heli contains few layers beyond its central political outcry, but then, maybe it doesn’t need to.