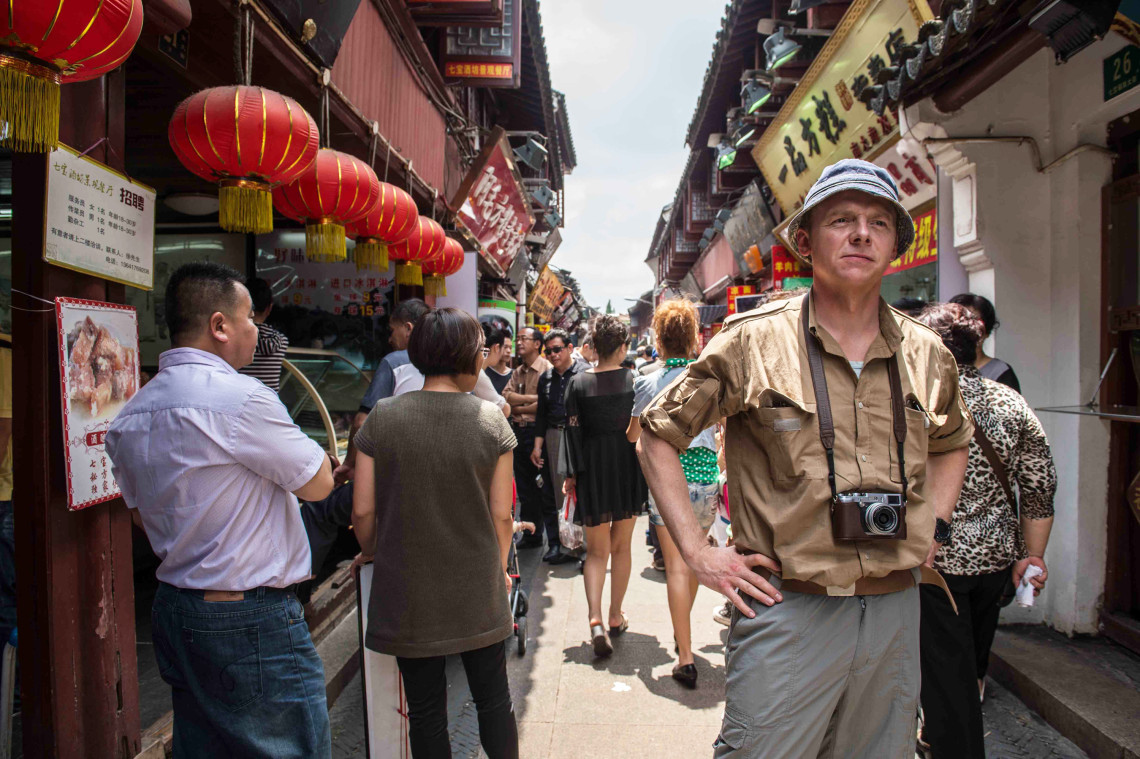 “Hector and the Search for Happiness”

What makes people happy? If you want a pleasant enough film to neatly present a response to the age-old complex question that isn’t answered with the number 42, look to Hector and the Search for Happiness. Hector (Simon Pegg) is a frazzled psychiatrist worn down by his patients’ middle-class problems of his patients and about to collapse into a mid-life crisis when he realizes he’s not sure if he’s happy himself. Doesn’t he know what real suffering is? How could he possibly be unhappy when there are truly terrible things going on in the world? The grand idea occurs to him to finally take that big mid-life crisis adventure and find out what happiness means. We are all fortunately spared the purchase of a new sports car.

There’s sweetness in Hector and the Search for Happiness. Pegg is as earnest as ever, trying to reach some sort of conclusion to a impossible query. As he discovers, happiness might not always be so easy to find. His journey takes him from Shanghai to an unnamed African city (more on that later) and Los Angeles to reconnect with friends and make new ones along the way. Hector tracks down the girl who got away (Toni Collette) and the collegiate best friend (Barry Atsma), but back home, he leaves his unsettled girlfriend (an always wonderful Rosamund Pike) with the uneasy prospect of staying with an insecure Hector.

Director Peter Chelsom sprinkles Michel Gondry-like animation to keep the energy light and easy, but the tone is inconsistent. In one moment, there’s a cute puppet sequence illustrating Hector’s trip, then is interrupted by the serious depths he must endure for enlightenment. No one probably finds self-actualization without being held at gunpoint or kidnapped by drug lords, but you know, suspense! It’s almost unsettling how inexplicably unpleasant they made the middle of the movie. European cinema is full of movies about the strange and wondrous world of internal conflict. Hector and the Search for Happiness would not make a great example.

Too much formulaic watering down keeps Hector from self-actualizing its own narrative. The plot incorporates many different characters into Hector’s journey, weighing down the pace with tangents. If Pegg wasn’t so affable, the film would fall apart much earlier. Then there’s that awkward trip to Africa where the destination city is never really mentioned and the stereotypical “Africa is a dangerous place but full of happy people!” images gets trotted out for 20-ish minutes of the runtime. How enlightened indeed.

And as great as it may be to watch a wizened Christopher Plummer play a guru-like psychologist, his role is much too convenient, his conclusion much too easy, and trips the journey for happiness at the finish line of “duh.” Homages to The Adventures of Tin Tin (another feature with Pegg used as comic relief), are thoughtful, but it’d be nice if other parts of the movie had been padded out with better attention to detail. Besides, how many more midlife crisis movies are there to be made? (Please don’t answer that).

With a final summation of “Don’t worry, be happy,” clearly the Search for Happiness itself was to provide more entertainment. This simplistic answer aims right for the upper middle class it skews at the beginning. No one seems to have debt, everyone lives comfortably without food stamps, but pity the poor in Asia and Africa (no suffering Angelenos to be found here). Its limited scope sends the message to those in countries like Hector’s with a message: you have no reason to complain about being unhappy since you don’t live in these situations. If other people can be happy there, why can’t you be happy here?