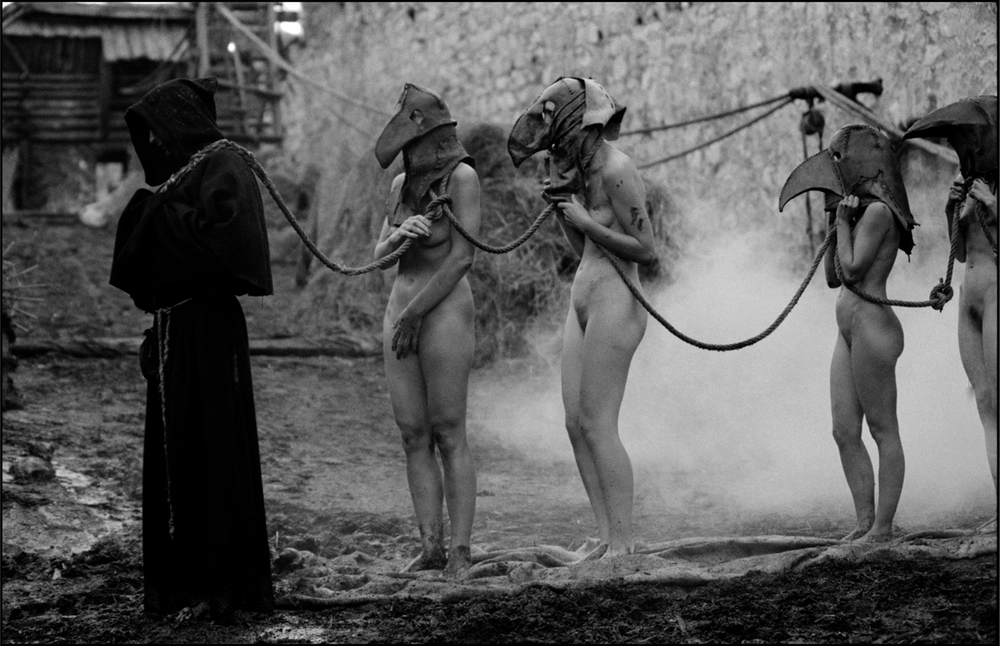 A sickly child prince farts after nibbling on the exposed breast of a large bald woman. An intoxicated man gnaws on a leg of meat astride an ornate rocking horse. Nearby, another kicks a metal globe of Earth across a stone floor, past a bare ass bent over a table, while the camera drunkenly prowls and chuckles, a cacophony of clanging armor, chains, pots, pans, and goblets crashing loud in the sound mix. It’s a scene typically evocative of Hard to Be a God, the swansong of the late Russian director Alexei German—a dense, ruminative film so thick with a comical layer of mud, piss, feces, and any number of bodily fluids that it surely qualifies as one of the grimiest pictures ever made. (Call it Hard to Take a Bath.) It’s also going to go down as one of this year’s best.

Adapted from the 1964 novel by Arkady and Boris Strugatsky (whose Roadside Picnic formed the basis for Tarkovsky’s Stalker), Hard To Be A God is set on a distant planet 800 years in the past, in a regressive civilization where the Renaissance, a narrator informs us, “didn’t happen.” That’s putting it mildly: it’s a society so curdled with grot and pestilence of every stripe that it makes most other movie Middle Ages look urbane by comparison. A team of Earth scientists has been dispatched to this cosmic swamp, posing as common folk and ostensibly charged with studying events, identifying artists and finding intellectuals who might enlighten and further the planet’s progress. Unable to interfere with events, their leader (Leonid Yarmolnik) has assumed the guise of the god Don Rumata, but when we first meet him—half-clothed, hungover, and gagging into a cup—it appears he’s already succumbed to his alien environment, resigned to wander a hostile landscape in an observational stupor.

Rumata’s passivity will be challenged by the physical and moral squalor, though, his theories tested by a world run by a corrupt religious order in the process of abolishing education and rounding up poets and other liberal miscreants for execution. In an early scene, a literary critic is sent to an outhouse to be drowned; in another, rapacious capital soldiers hold up crude blocks of wood as a parody of art. The rot, as Rumata discovers, is more than surface-deep, and the price of his bearing otherworldly witness is a gradual dismantling of the finer senses. Even the birds here are drunk.

A bog of eternal stench for the ages, German’s insanely lavish mise-en-scène is both nightmarish and beautiful. Head-over-heels engorged with filth, the camera is on a near-constant move, at times aping the blurry, rounded frame of Rumata’s woozy perspective and others immersing itself in the details of soldiers, peasants, and urchins that wander into shot. At any moment, there are at least four or five fascinating elements jostling for attention in the crowded frame. Intestines spill from hanging corpses into rain puddles; eyeballs get yanked out; there’s an extreme close-up of metal spikes being plucked from a naked, scab-ridden ass; and a donkey’s penis, uncannily resembling the hilt of a sword, gets treated to a loving pause. Dead dogs, clapping chicken feet, and pig’s heads often obscure the camera’s view, while at various points, characters wobble perilously towards the lens, to mock, inquire, or simply serve as mischievous punctuation marks to the grotesquerie. One meticulous shot, depicting a flaming torch reflected in the eye of a cow, is worth the price of admission alone. To invoke one of film criticism’s most abused adjectives, Hard to be A God is genuinely visceral; it’s only minor hyperbole to suggest that the film’s smell is almost tactile. (For yuks, an entire page of my screening notes simply read “Snot. Vomit. Spit. Piss. Mud. Blood. Shit. Fish oil.” John Waters would do well to get on this in Odorama.)

Yet while the audio-visual pleasures are abundant, it would be a mistake to dismiss the film as merely a rambling carnival of fetid delights. Though it might superficially evoke the result of, say, Béla Tarr directing a Terry Gilliam cartoon, with its austere black-and-white refracting an exaggerated Boschian tableau, Hard to Be a God is a rich thematic work, resembling nothing so much as German’s own cinema. Working from the Strugatskys’ text, German imagines a world smeared with corruption and ignorance, in which a supposedly enlightened visitor—God, even—can be compromised. It isn’t hard to find echoes of German’s earlier work that explored individuals under Stalinist oppression, just as it’s possible to accept God as a broader allegory for man’s past mistakes—and, perhaps, worst-possible future. It’s not incidental that a rusty tank might unexpectedly appear like some grim portent of industrialization, nor that the film’s women, in the rare scenes where they do appear, are generally marginalized and demeaned. At almost 3 hours, the grueling nature of the viewing experience feels designed to induce the very entropy it illustrates; a willful disorientation guaranteed to leave an audience as uneasy as Rumata.

Indeed, when our hero finally collapses in a dirty pond and his own absurd circumstance, he’s a deflated deity, as crestfallen and bemused by his quest as German appears to be. Though Hard to be A God rarely sweats its science-fiction concept, the sense that this is but a parallel dimension is never far from the proceedings, the question of interstellar intervention with the planet’s fate hanging over things like so many dead fish in the frame. (The 1989 Soviet-East German adaptation of the novel, featuring a role by Werner Herzog, made the simultaneous sci-fi element much more explicit, with model UFOs and Rumata’s futuristic-clad superiors interfacing with the main action.)

For German, who began the project in 2000 and filmed for 6 years (it was completed after his death, in accordance with his vision, by his son), Hard to be A God will rank among the great final works in cinema. Despite working, on one level at least, as a lament for the disintegration of art and culture, the film’s own magnificence makes a grand case for its ongoing vitality—a celebration of shit in all its literal glory that’s a masterpiece as a consequence. “Where is art? Where is renaissance?” an ogre wonders in one scene, before leering into the camera with a conspiratorial, rotted-tooth grin. The answer is easy: right here.