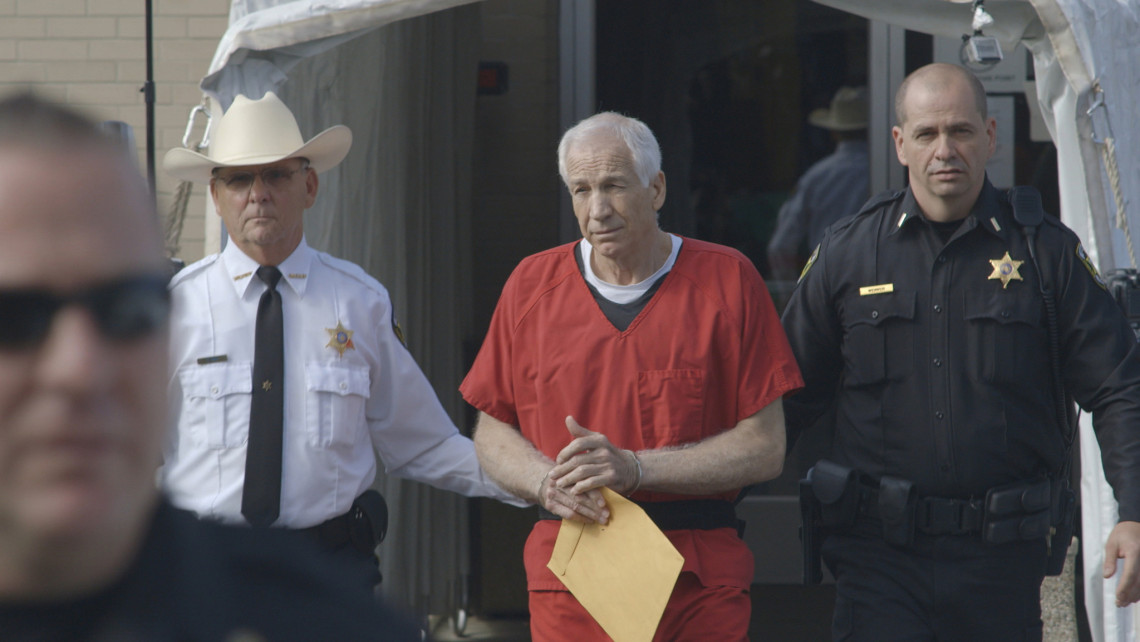 Don’t expect to learn anything new about the Penn State scandal from Happy Valley, a deeply unsettling documentary from director Amir Bar-Lev. The facts are here, pretty much as we followed them on the news a few years back, when assistant football coach Jerry Sandusky was convicted on 45 counts of child molestation and the program’s revered, four-decade-long father-figure Joe Paterno was fired for his complicity in the cover-up. Bar-Lev’s cameras simply place us at ground level in the midst of pastoral State College, PA as the revelations resound. Happy Valley is not a work of reportage so much as it’s a portrait of a community suffering from mass dementia. This is the scariest zombie movie I’ve seen in ages.

Football is a religion to the people of this so-called Happy Valley, where on any given Saturday, 100,000 or so folks cheer on their Nittany Lions in a state of ecclesiastical rapture. Coach Paterno was christened by the media as a “beacon of integrity,” spurning offers from the pros to stay and rack up the winningest record in the NCAA as well as inspire a graduation rate particularly admirable within the dodgy realm of college athletics. There was a statue of Paterno downtown, along with a gargantuan mural in which he and fellow Penn State luminaries are painted in such beatific fashion even some Renaissance artists might consider it a bit much.

Sandusky is immediately, rightfully scorned. (He’s quickly painted out of that mural.) But when beloved “Joe Pa” suffers consequences for looking the other way while his assistant was raping children, the people of Happy Valley lose their goddamn minds. Penn State students riot, swarming the streets, flipping vehicles and chanting like deranged animals – not because the school where they are paying a small fortune in tuition aided and abetted a serial pederast, but because their football coach got fired. More than once, moments of silence requested for Sandusky’s victims are interrupted by chants of Paterno’s name. Bar-Lev keeps cutting back to a spectacularly thoughtless young undergrad in a dorm room that’s practically a shrine to the disgraced former coach, apoplectic with outrage and wishing everyone would just get back to focusing on football.

They haven’t all gone mad. Bar-Lev captures an astonishing scene in which a disgusted citizen stands alongside that statue of Paterno (since removed; even President Obama said it should go) holding a protest sign, only to be batted around by locals and tourists trying to take pictures. He’s told he’s “infringing on people’s rights,” which perfectly sums up the aggrieved, self-pitying false victimhood trumpeted ad infinitum by most of these Penn State fans, and it only gets worse when the NCAA imposes harsh sanctions that have, of course, since been lifted.

Bar-Lev has a bit of trouble incorporating the harrowing testimony of Matt Sandusky, who was adopted by the predatory assistant coach and speaks eloquently about the abuse he suffered. His words are quite valuable while also feeling shoehorned into the movie’s macro-view. Matt Sandusky’s story perhaps deserves a film of its own; it almost feels too personal for the dispassionate detachment of the surrounding sociological study.

I first saw Happy Valley back in January at the Sundance Film Festival, but revisiting it this week provided a fascinating accident of timing. Barely 2 months ago, the NFL appeared to be at its public relations nadir, blighted by one scandal after another with everyone talking boycotts, screaming for Roger Goodell’s head and a certain high-profile columnist suspended from ESPN for calling out the commissioner on his lies. But now we all seem to have moved on from that; ratings are fine and everything’s back to normal – just as Happy Valley’s haunting final scenes depict the people of State College, PA returning to the stadium and blissing out in rapture over their triumphant new coach. In America, nothing can keep us away from our games for very long.