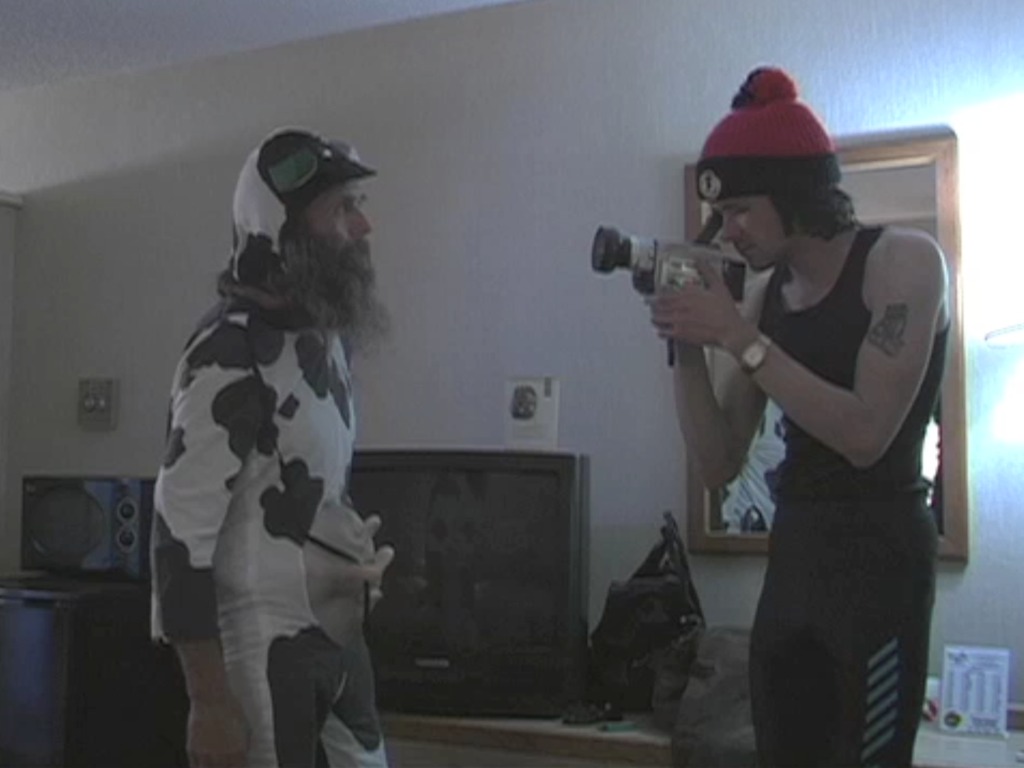 In the late 1990s, Giuseppe Andrews was a steadily employed child actor who you might remember from Independence Day, assuming you remember anything from it all; I’m stumped. Before accidentally tripping into show business, Andrews lived with his father Ed – a guitarist who once toured with The Bee Gees — in a van by the beach in Malibu. When Giuseppe’s old Detroit Rock City director Adam Rifkin caught up with them in 2007, this son-and-father odd couple were quite happily residing in a Ventura, California trailer park, where they’d become movie moguls of their own peculiar fashion.

Giuseppe Makes A Movie chronicles the production of Andrews’ 10th feature (or maybe it’s his 20th, he threw a lot of them away), Garbanzo Gas. After spending his teenage years binging on Fassbinder and Pasolini films – and especially inspired by Bunuel’s Viridiana – Andrews took up a camcorder and started shooting bizarre, underground DIY movies starring his fellow trailer park denizens, plus assorted tweakers, strip club waitresses, and homeless folks.

What immediately distinguishes Rifkin’s documentary is the warmth we find in this marginal community. Giuseppe is an effusive fellow, full of boundless positivity and kindness for his camera subjects. Ed works as the producer, cheerfully handling logistical issues like a liquor store run (a lot of the actors are paid in cigarettes and booze) while parceling out the picture’s astronomical thousand-dollar budget.

From what we see of Andrews’ movies, they’re outlandish, heavily allegorical works of outsider art with an emphasis on scatology, and his working methods couldn’t be further from the Hollywood sets where he spent his childhood. “The way we deal with continuity is that we don’t give a shit about it,” Giuseppe explains. He writes his screenplays in longhand, only keeping a single copy to which he seldom refers. He runs around with a consumer-model camcorder feeding lines of dialogue to the actors, who repeat them back into the lens –mostly vulgar nonsense phrases like: “I’ll shoot a schlong oyster into your shit stall.”

Garbanzo Gas is the story of a cow furloughed for the weekend from the slaughterhouse on an all-expense paid vacation so he can enjoy life a little bit before has to go back and become somebody’s steak. (Kind of like The Last Detail, only with mooing.) The cow is played by Andrews’ friend Vietnam Ron – a spectacular wreck of a man wearing a cheap Halloween costume. There seem to be a lot of other dudes in the movie doing drugs and getting violent in a hotel room while wearing silly wigs and toting props from the dollar store. Giuseppe doesn’t over-intellectualize the process. He couldn’t come up with a title for the movie, “but then I ate a can of garbanzo beans, farted, and I knew we had it.”

I’m not sure I’d ever want to sit through one of Andrews’ movies  — though it uncharitably crossed my mind more than once that they look roughly as professional as Joe Swanberg pictures and are probably way more interesting — but watching him make one is an unexpectedly lovely experience. There’s a real generosity of spirit behind these scenes, and Rifkin hangs with his subject’s motley crew, allowing them to open up here and there about lives that went off the rails, and the camaraderie of embarking on a creative project with your friends.

Giuseppe demonstrates an almost saintly patience dealing with a cast member who keeps shitting himself over the course of this two-day shoot. This compassion is reflected in Rifkin’s refusal to mock or judge these strange, wayward characters on their quixotic artistic adventure. Giuseppe just accepts everybody for who they are. So does the movie.