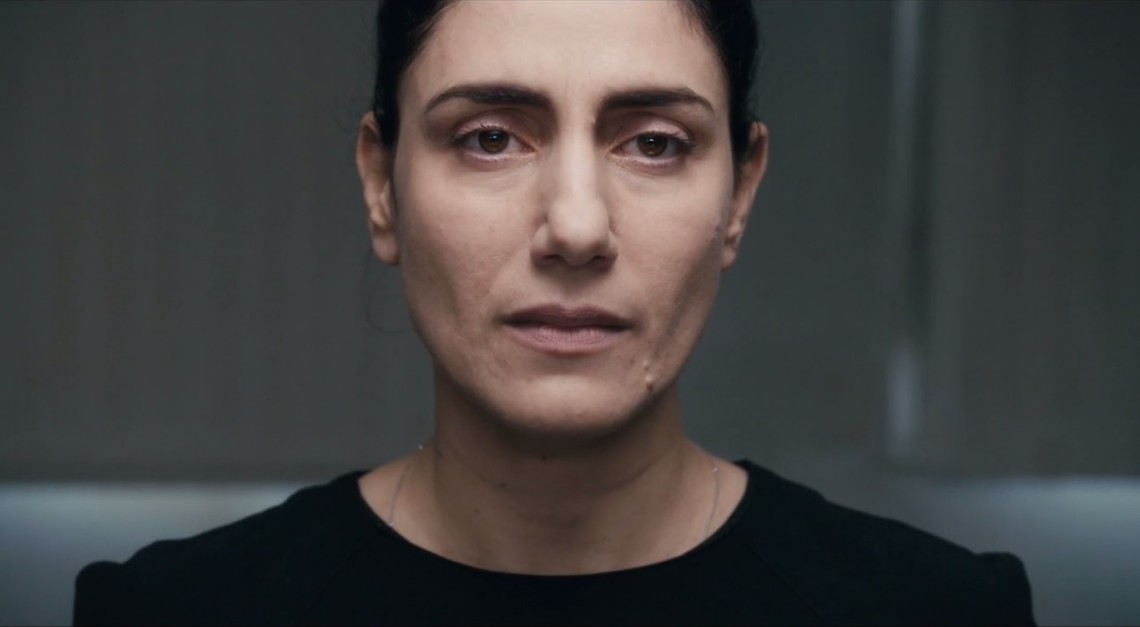 “Gett: The Trial of Viviane Amsalem”

The scene opens. A man stands over us, staring in our direction. He looks away and begins to speak. Next, another man sits in a chair next to him looking away from us, and he speaks, too. After several minutes, we cut to a woman. She sits silently, processing her situation and barely hiding her disdain. Finally, a shot of the woman from above: God’s eye looking down, omniscient and ambivalent. For the next 100 minutes of Gett: The Trial of Viviane Amsalem, while the dialogue flows constantly, the camera does the most telling of all.

Gett is the third film by Israeli sibling writer-directors Ronit and Shlomi Elkabetz; in it, they’ve crafted a work of great cultural specificity, human complexity, and moral weight. It’s a bold film in its structure, and bolder still in its piercing aims. The film is entertaining, shocking, and devastating, often all at once. Its social opinions are particular to a single place, but its implications are far grander. In short, the Elkabetzes have fashioned a masterpiece.

Gett is built on a very peculiar aspect of Israeli life and law. Though the country operates largely on a secular basis, in the arena of marriage, the state takes no authority. All powers of marriage and divorce are ceded to nine recognized religions to handle for themselves, with their own courts and religious laws. If you’re a Jew and you want to get married in Israel, you must be married by a Rabbi. And if you want a divorce, you must go through the rabbinical court.

That’s where Viviane Amsalem (Ronit Elkabetz) goes to request that her husband, Elisha (Simon Abkarian), be forced to give her a gett, the Jewish religious document of divorce. Jewish law, as one might expect, favors the husband in these cases, and that’s the trouble Viviane faces. Her husband stubbornly refuses to give the gett, and Viviane is left, through her lawyer Carmel (Menache Noy), to argue a valid case for the court to force her husband’s hand.

The film is set entirely within the courtroom itself and the waiting area just outside. Years pass and the camera never steps outside, simply cutting through time with a title card naming some number of months later. The gambit is as effective as it is clever. The absurdly drawn-out situation shows no signs of progress and the frustration builds. For how many years must we stare at these same, ugly, off-white walls and the faces of these uncaring men? For how long must Viviane be subjected to this game, this utter farce, which slowly threatens to eat away at her dignity? Though the film is about a suit for divorce, the sly subtitle, The Trial of Viviane Amsalem, could not be more appropriate.

As time marches forward, a cast of characters is slowly assembled: the husband and wife, their legal representation, their character witnesses, the three rabbinical judges. All have their own perspective on the situation, no doubt informed by their backgrounds, a fact in which the film indulges with amazing precision. Most of the characters are Moroccan Jews; they are immigrants to Israel, including Elisha, whose first-generation status makes him uncomfortable speaking Hebrew, forcing him to fall back on a mix of French and Arabic. The range of religious adherence and practice in the film is deftly portrayed as well, and often dictate how the characters interact with and judge each other. In Gett, personal religion isn’t some monolithic good or bad, but a prism through which human behavior—as well as Israeli politics—is both affected and understood.

Ronit Elkabetz is the star of the show. For a film enamored of faces, hers is most important, and what she does with it is magnificent. Viviane hardly speaks, save a few outbursts and an interrogation, but it doesn’t matter. Every time her face is on screen, the eye is drawn right into her. In her expressions is the pain of all she is put through, from her contempt for the process to her scorn for the husband forcing her to endure it, and even the mildly maniacal gleam in her eyes in the moments when her predicament is at its most Kafkaesque.

While her face anchors it, Elkabetz and her brother understand that the heart of the film is in where the camera is pointed and when, and even how. Almost every shot is set up to take the perspective of another character in the room, whether it’s Viviane looking at her husband across their lawyers, or a witness staring at Viviane’s uncovered legs, or the judges looking down from their perch. Though they all sit in a cramped, dank room, the camera reveals the distances between each of them. In the end, the camera always returns to the most crucial dynamic of all: a husband causes his wife pain because he can and because a backwards system allows it. God might’ve spared Viviane her agony, but it appears He left the room after that opening scene, abandoning her to suffer in the court built in His name.