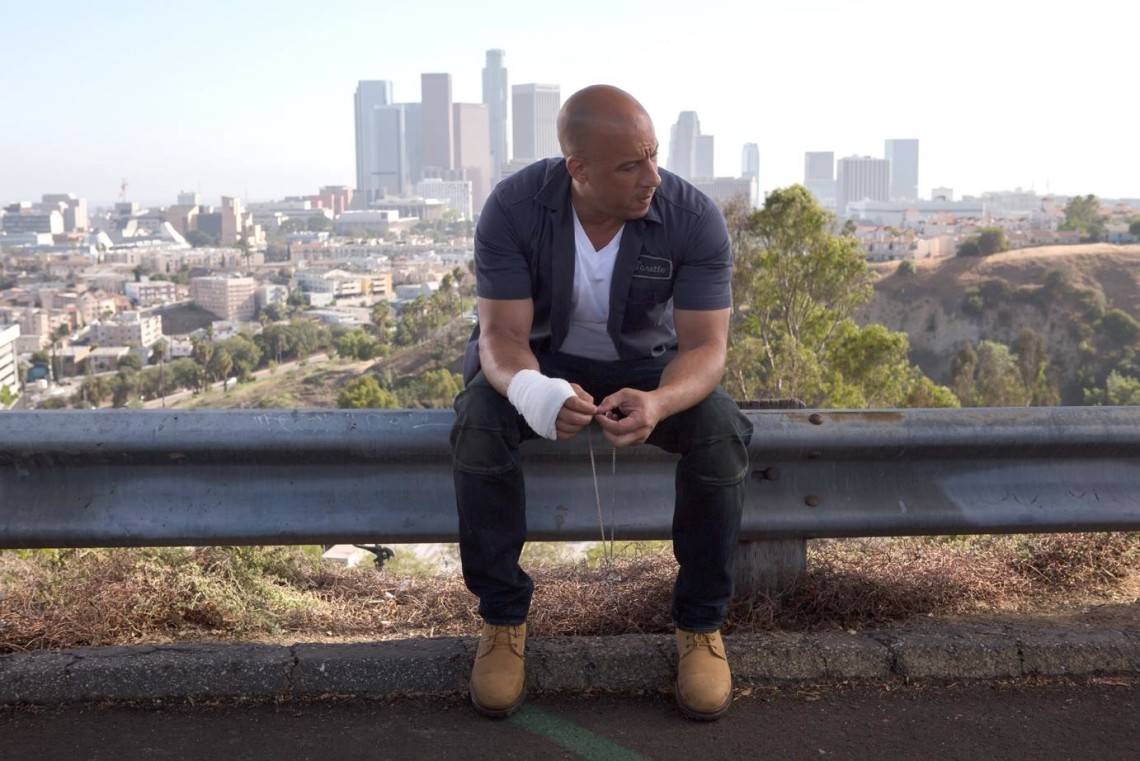 Observers have joked that the Fast & Furious movies couldn’t bring vehicular action to any higher level of impossibility. Furious Seven shut them up with its trailer, which featured skydiving cars. We should not tempt fate with any further speculation on where the franchise could go, because space cars feel like a legitimate prospect at this point. Somehow, a series that started out about street racing and lifting DVD players from trucks has evolved into a straight-up superhero universe, though one in which all superpowered individuals’ skillsets are confined to car-related stuff (except Dwayne Johnson’s Luke Hobbs, who here is low-key confirmed to be The Hulk, seriously). But I’d take a Fast & Furious film over pretty much any Marvel and DC fare, even if Furious Seven has left behind a lot of the heart that set this series apart.

The superhero comparison isn’t just due to the sci-fi unreality of the action, mind. In Furious Six, Dominic Toretto (Vin Diesel) and his family got access to government resources and intelligence as part of a special deal for immunity from their past crimes. Here, they’ve fully joined with an Avengers-Initiative-like setup. They’re still working with the authorities to their own ends, but the story sets up their continued cooperation, likely hinting at the direction the franchise will take going forward. Once outlaws, these characters are now millionaires who can ask for whatever they need at the drop of a wrench.

Thus, villain Deckard Shaw (Jason Statham) is a strangely muted threat. He’s established as a Terminator-type one-man army, but he appears more as an annoyance to the good guys than the main antagonist for most of the runtime. Though the plot is kicked off by Shaw’s campaign of vengeance against Dom and the family for what they did to his younger brother (the villain of Furious Six), the focus quickly shifts to the crew joining with the government to take on an entirely different threat. The plots in these films are only excuses for action setpieces and characters affirming their love for each other, but writer Chris Morgan has historically been better at keeping the result clean and efficient. Furious Seven, in contrast, feels bloated.

Starting with 2009’s Fast & Furious, each movie opened up this endearingly muscular universe more and more. But now, the roster of characters is getting pared down. Sung Kang’s Han and Gal Gadot’s Giselle were killed off in the previous film (technically, Han was killed off in Tokyo Drift and the series has only now caught up to that point and … you know what, let’s not get into that whole continuity thing). Brian is retired by the end of this one due to actor Paul Walker’s death midway through filming. Jordana Brewster’s Mia is once again annoyingly sidelined, forced to worry at Brian or Dom over the phone again and again. Worst of all, Hobbs sits out most of Furious Seven, though Johnson brings his charismatic A-game to maximize his scenes, to wonderful effect.

The F&F franchise has always thrived on the relationships between its protagonists, which is why it’s no accident that it really took off once the scope of each film expanded to team efforts. It’s also why the best parts of Furious Seven that don’t involve ridiculous mayhem (more on that in a moment) are the ones that maintain that spirit of camaraderie, particularly with Tyreese Gibson’s Roman and Chris Bridges’ Tej. The new major characters played by Nathalie Emmauel and Kurt Russell don’t fill the void left by the absent ones, though Russell is having a lot of fun.

The pared-down focus could have resulted in more intimate character work, but that is sadly not the result. The subplot with Letty (Michelle Rodriguez) trying to regain her memory is a non-starter. And Brian’s storyline, in which his fear for his family’s safety wars with his desire for adventure, feels hollow, even though it’s weighted with the real-life context of Walker’s departure from the series. A big reason for that hollowness is the fact that Walker is not truly there in half his scenes, his absence covered up by body doubles who bear his digitally-recreated head and voice. It’s an unnerving and odd case study in how important a face is to a performance, and how far CGI still has to go before it can replicate humanness.

With all of this wonkiness, Furious Seven could have been the worst entry in the series, even moreso than 2 Fast 2 Furious. But it is absolutely saved by its action scenes. With a titanic budget, greater than the franchise has yet seen, there’s more CGI plastered onto the practical work than ever before. But it’s totally forgivable because director James Wan, who comes from a background in horror, knows how to build to fist-pumping climaxes. This series understands big action moments in a way that too many blockbusters don’t. It makes every setpiece a continual, rousing delight. Skydiving cars are only the beginning. Wan’s horror-to-action transition feels sloppier in other aspects — there are a lot of unevenly-implemented music video flourishes, like undercranking and rotating frames — but the directorial handoff from Justin Lin to him has gone far better than many feared it would.

More than anything else, what makes Furious Seven feel like a superhero film is how it tries to work emotion from audiences’ preexisting relationships with its characters, rather than doing too much on its own. But it’s still a blast, and will likely stand as one of the better summer actioners of the year. And unlike the previous three F&F flicks, it ends on a note of closure rather than a last-minute cliffhanger twist (there’s no bonus credits scene here). Thus, if the series gives in to its worst impulses going forward, we fans have a good, satisfying stopping point.