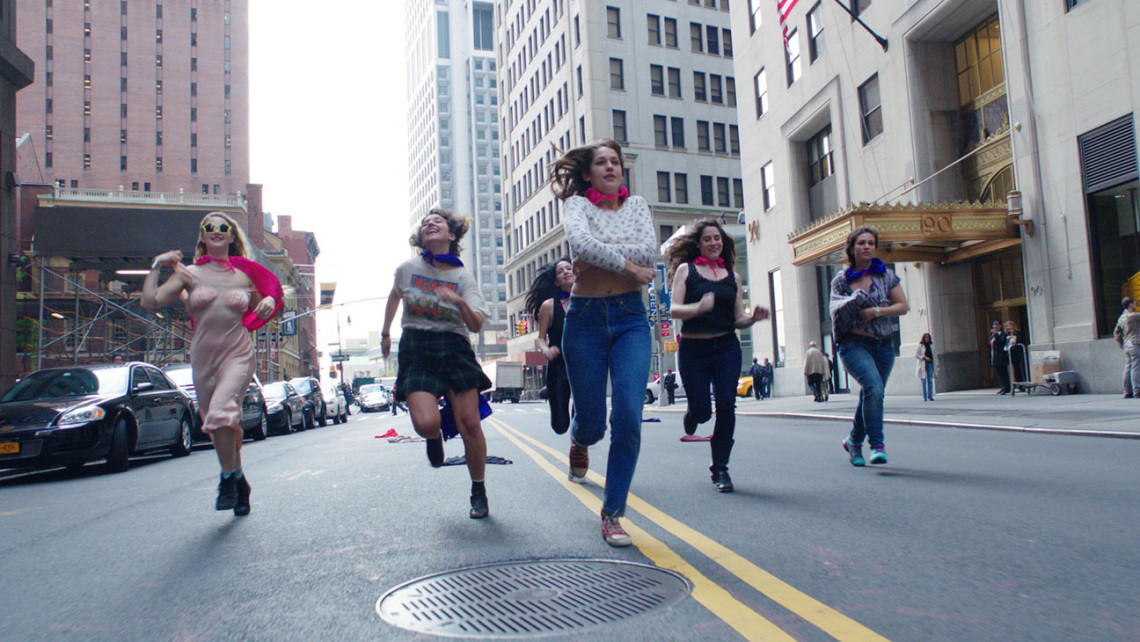 After watching Free the Nipple, I’m left with many questions. This pseudo-documentary claims to “Free the Nipple,” yet blurs out several instances of topless demonstrations. Why would it do that? Is it just a documentary of pure reenactments or a fictionalized account of the grassroots movement to liberate the areole from societal double standards?

Freelance journalist (and the movie’s director and co-writer) Lina Esco has hit a rough patch in telling the story of a group of caped topless crusaders raising awareness of New York’s oppressive policing of women’s bodies. Although there is a law that protects topless female New Yorkers, it was not upheld, and several of the women went to jail for public indecency. However, her paper passes on the story, and Lina decides to get more involved with the activist enclave to break them into the mainstream news cycle. The lot gains more women and demonstration ideas. Lawyers, angry cops, and slow-motion topless running sequences follow suit.

I get the need to tell the story, but the way in which Esco presents it doesn’t always work well. It’s unclear if a majority of the on-screen personas were also involved with the movement or stand-ins for other activists. It’s “based on a true story,” but none of it really feels authentic or actually is about documenting the movement with details like time, day, and place. Much of the impression I’m left with is about the tiffs between the women and the bureaucratic struggle to organize grassroots movements. I certainly think there was a better, less exploitative way to present the act of topless marches than slow-motion shots of boobs in motion, which is how the movie begins. As for historical and cultural context for this form of physical consciousness rising, there is very little mention other than the Aurora, Colorado theater massacre. Huh?

Perhaps it’s too free-spirited to clarify these details for their audience, but then why make a movie about a recent movement if only to fictionalize so much of it? It is no longer the story of this movement to protect women’s rights and to challenge the criminalization of women’s bodies; the film becomes about the egos of the activists. Their message becomes muddied, and it becomes something I no longer want to listen to. Free the Nipple is more of a confusing and frustrating experience than an inspiring one, and I feel guilty to have to point that out. But hey, someone should.