For Your Reconsideration: ‘The Lone Ranger’

Though I’ll preach for it to be “re-considered,” The Lone Ranger isn’t quite worthy of year-end top ten lists. It’s not a particularly well-paced movie, for one thing – the lengthy second-act, prone to expository diversions, is itself more than enough to distance the picture from the best of its 2013 peers. Yet the picture sports characteristics that vault it high above the year’s more pedestrian (and more successful) blockbusters: It’s a politically-motivated, Disney-produced spaghetti western, unrepentantly violent and borderline-surreal, rendering the fact that it exists a marvel in of itself. So while The Lone Ranger may not be worthy of placement next to films by Steve McQueen or Martin Scorsese or other top auteurs, it’s more than worthy of your consideration the next time you’re looking for something to watch through your selected renting/streaming service.

The reason we need to re-consider Lone Ranger is because the picture didn’t play with either audiences or critics. It bombed, with much of the discourse about the film revolving around either its apparently troublesome representation issues or its spectacular train-set opening and closing set pieces. The latter fixation is understandable: these chase scenes, with Johnny Depp’s Tonto and Armie Hammer’s Ranger defying physics to battle bad-guys on speeding trains running on parallel tracks, are some of the most brazenly spectacular sequences put to film in many years. Rather than focusing on bullets traded and blows landed with shaky, ‘immediate’ handheld photography, director Gore Verbinski relies on the pleasures of unexpected motion occurring within a static frame: a character falling off a train to land on an unseen horse, or our dynamic duo finding themselves swinging in circles after the chains on their hands get caught on an overhead cable, or, most famously, Tonto bridging up on a ladder in the “middle” of a fight between the Ranger and William Fichtner’s Butch Kavendish.

It’s not just the well-composed action that cuts against the big-budget grain, though. When compared to other blockbusters of its ilk, Ranger is more than just idiosyncratic or eccentric; it’s a rebuke to every narrative standard that would-be serial series like the Fast & Furious or Marvel movies rely on. It’s an anti-franchise film. Its canon isn’t carefully curated, and in fact, it’s gleefully shattered: Depp narrates the film from his position in a traveling circus during the early 1900s, and at one point turns to the camera and winks as an unresolved continuity error is explicitly referenced. The error is never explained. Later still, at a climactic moment, the main character’s most longstanding hallmark is ridiculed unapologetically, never to be referenced again.

Yet the film’s “stinger” – the last image laid over the credits – illustrates the point most clearly. This is where most franchise films set up the villain who’ll appear in the sequel, or offer the crowd an ingratiating gag aimed to send people home happy. The last image given to viewers of The Lone Ranger, however, is of a man solemnly walking away. 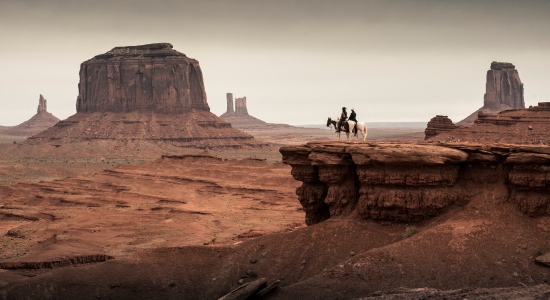 Ranger has more on its mind than undercutting the standard operating procedure of a franchise reboot. It’s one of the most politically motivated American studio films produced this year – or, perhaps, in any year. In fact, it’s so nakedly at odds with the everything-is-fine tone most Disney films finish on that, for that reason alone, it will likely remain a curious historical object to fans of the studio for decades to come.

What we have here is no less than a whistleblower’s narrative, one tuned to the nothing-gets-fixed tendencies of our age, in which anti-establishment American “outlaws” rush to Hong Kong or Russia – or worse yet, prison – after revealing the extent of government culpability in criminal activity. Hammer’s Ranger tries to work within the system of law, but soon finds the wealthy white men who control the train lines (there’s a lot of Leone here, from the plot points to the non-linear narrative construction) are above that law. He witnesses them concoct machinations that will allow them to massacre Native Americans for the sake of land ownership. Verbinski’s America is explicitly one where powerful white men and government officials murder minorities and cover up unlawful atrocities for the sake of retaining their status quo, banishing anyone who suggests otherwise.

Hammer’s character eventually jettisons his career and position, realizing that his idealism has no place in an America ruled by corporate overlords, and he rides the country as the masked Ranger. This is a picture about a man who realizes the outsider’s path is the only one for him, not because he’s been wronged or forced into a life as a vigilante, but because he cannot change his inherent goodness, and his country cannot dispel its racist and classist corruption. That’s what’s singular about The Lone Ranger: Nothing gets fixed. The good guys give up on society, and the framing device makes it clear there is no happy ending to be found for their troubles.

In this subversive, anti-authoritative, deconstructing-and-reconstructing-the-myths-of-the-west manner, Verbinski truly recalls Leone. He can’t match the legend’s poetry – there’s not a shot here as cleanly composed and colorfully splashed as even the more standard moments of, say, For a Few Dollars More – but he speaks the same language. He’s given us a tangled narrative of disparate people working together against a system that’s rigged against them, forced to fight back against a disparity that’s been institutionalized since the days the west was wild. It’s all built in to the fact that the film is presented as an unreliable narrative told by Tonto: the western was a conduit through which America’s beginnings were mythologized as the result of hardworking white males, and the onus is on those who know better to correct that myth.

The Ranger’s character arc, as such, is clearly dictated. He’s introduced playing gleefully with a little girl’s toy, his naiveté allowing it to go flying out the window. Soon after, he sabotages both himself and Tonto by droning on about how there’s no need for guns in the future, allowing Kavendish to gain the upper hand. By the end of the film, though, Hammer’s Ranger is turning his gun on U.S. Union soldiers, shooting and killing while his theme song blares triumphantly – and unironically – in the background.

Forget the train chases, the ‘reboot-syndrome subversion,’ the comparisons to Leone. If only for daring to turn the hero of a Disney movie into a Death Wish-style vigilante firing indiscriminately at soldiers on behalf of a wronged and oppressed people, Verbinski’s The Lone Ranger – a strangely progressive, idiosyncratic beast – deserves your attention and sincere consideration.

2 thoughts on “For Your Reconsideration: ‘The Lone Ranger’”