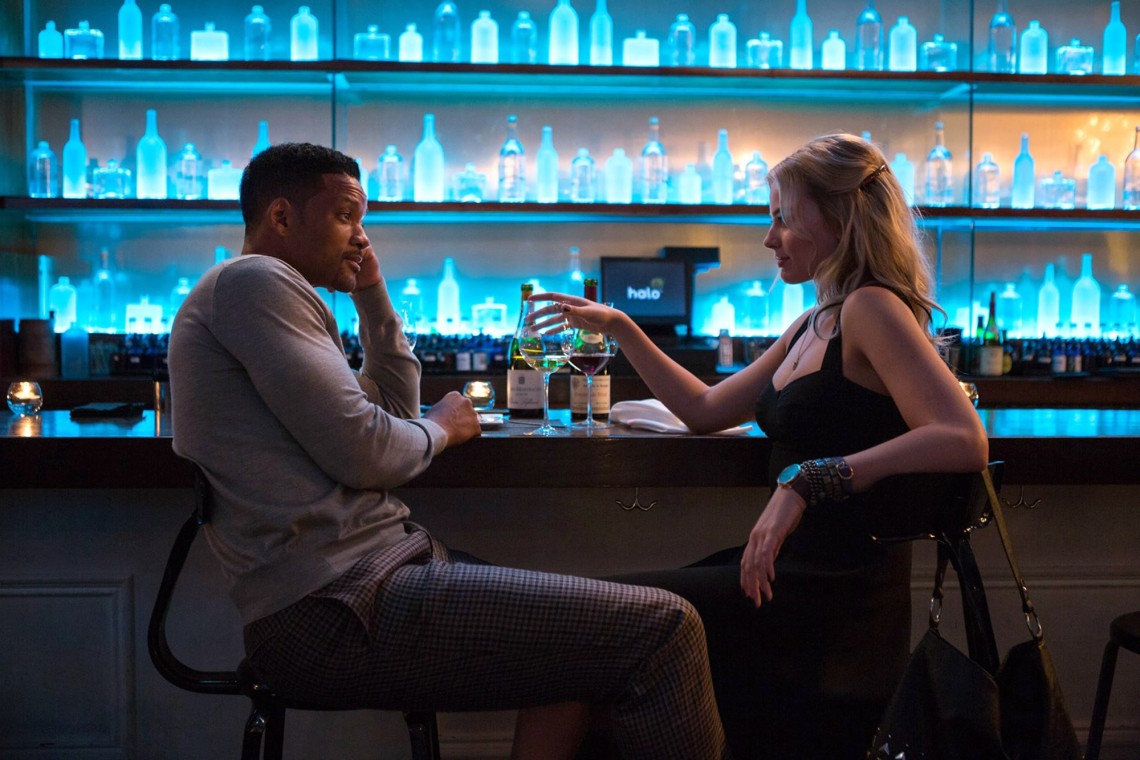 Focus is two movies for the price of one. You get a sparkling, sexy comedy and its lackluster, dispiriting sequel, both in the same sitting. I enjoyed the first half of this picture as much as anything I’ve seen in a while. The exhausted CEO of Will Smith Family Entertainment Enterprises ™ gets his mojo back here and kicks it Big Willie Style as veteran con man Nicky Spurgeon. Relaxing over drinks one night in New Orleans before the Super Bowl, he’s made as a mark by wannabe grifter Jess (the gobsmacking Margot Robbie), who isn’t quite ready for prime time. Nicky plays along with her lame game for a bit because he’s intrigued by her potential. “Also boobs,” he later admits, only slightly sheepishly. “I like boobs.”

He likes Jess too, and who can blame him? Robbie is a dynamo in this movie, all va-va-voom sex bomb with a beguiling undercurrent of awkward, klutzy vulnerability. We saw an awful lot of her in a game turn playing The Duchess of Bay Ridge to The Wolf of Wall Street, and I’ll admit a bit of concern after watching Robbie trudge through the drudgery of the upcoming Sundance bomb Z for Zachariah. But holy cow, this woman is a bona fide capital-letters Movie Star. We are immediately as taken as Nicky is.

After a frisky, foreplay pickpocketing tutorial that plays like Henry Higgins feeling up Eliza Doolitle, Smith’s Nicky invites her to join his crew. It’s a pop-up gang of miscreants working out of a cubicle office sticking to strictly low-rent boosts amongst the high-rollers in town this week for the Big Game. They lift watches, wallets, rings and credit cards, with a fake ATM to help with short-term identity theft. It’s all small potatoes stuff that adds up to over $1.5 million. “We work on volume,” Nicky grins with irrepressible charisma.

It’s also dazzling. Directors Glen Ficarra and John Requa are making a Steven Soderbergh’s Greatest Hits Mixtape here, borrowing Out of Sight‘s sexy frissions along with the Ocean’s knack for somehow making things suspenseful even though they’re going exactly according to plan. Focus is effortlessly cool (and very hot) for a good long time, ramping up to a genuinely amazing mid-movie showdown with the great B.D. Wong playing a billionaire degenerate gambler during a game in which, if I’m not mistaken, Oliver Stone’s Any Given Sunday Miami Sharks have made it once again to the Super Bowl.

The audience I saw Focus with applauded at the reveal capping this particular sequence, and I’m at a loss to say more for fear or ruining it except that it provides the great satisfaction of feeling like you’ve been played in the best possible way. The payoff is spectacular.

Alas, then the film jumps ahead 3 years, and that’s when Romancing the Stone becomes The Jewel of the Nile. Smith and Robbie have been split up by the screenplay for reasons that don’t make much sense, and suddenly, Nicky’s working a long con on a decadent Formula One honcho (Rodrigo Santoro) trying to steal the guy’s secret race engine MacGuffin.  Any guesses as to who this dude’s girlfriend is? (Psst, her initials are Margot Robbie.)

Or is she? FOCUS breaks faith with the audience’s previous investment for extended sequences of rug-pulling, cheap fake-outs, and generally jerking us around. We don’t have any idea what’s gone on with these characters for the past 3 years, so every interaction is suspicious and every reveal doesn’t land because there’s no grounding. After such a stellar start, Focus provides the great dissatisfaction of feeling like you’ve been played in the worst possible way.

It’s a shame, because I really do enjoy seeing Will Smith in this flagrantly sexed-up, coolest-in-the-room mode. (And not to be one of those horrible attendance-takers, but I can’t remember the last time a black guy was allowed to git down with a white lady in a major studio release.) Robbie again is a revelation — potty-mouthed and trying to learn to walk on heels, this is her Pretty Woman.

Focus will be an oft-cited footnote when Margot Robbie eventually takes over Hollywood. God willing and the creek don’t rise.