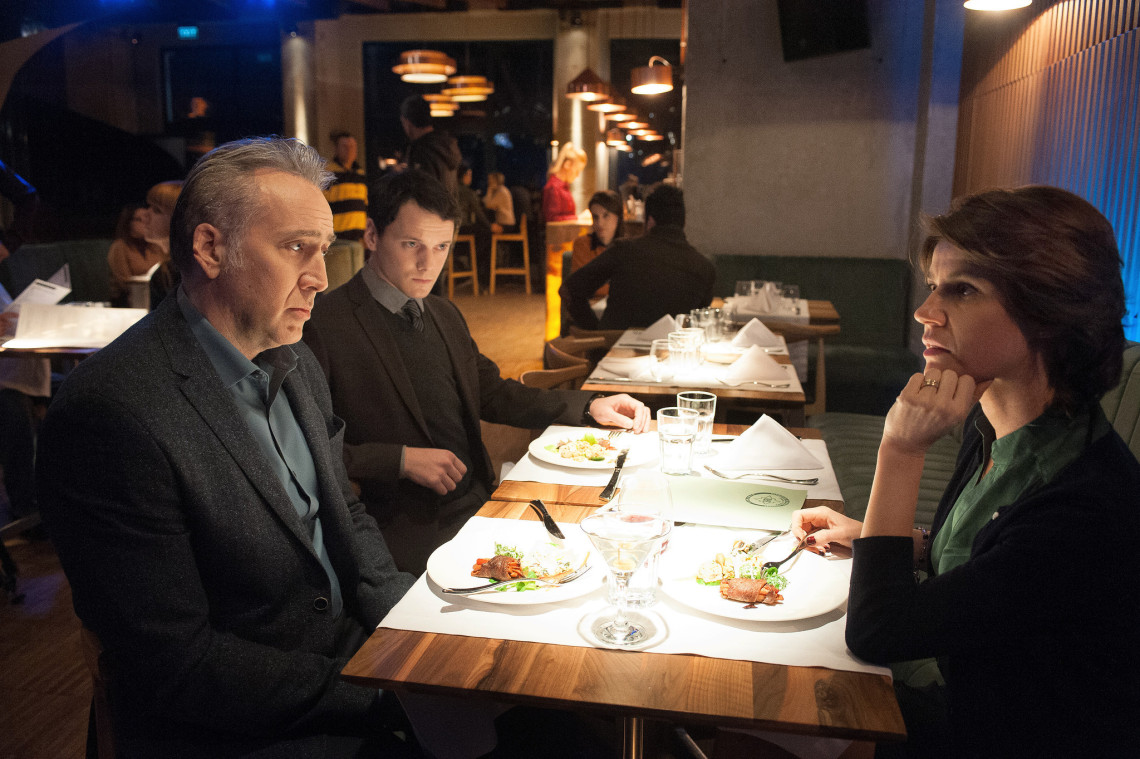 “Dying of the Light”

A traumatized taxi driver torn between savior and sinner. A kidnapped heiress gone revolutionary. A Calvinist father out to hunt down his porn-actress daughter. The concerns of director Paul Schrader vary in specifics but rarely in terms of overarching thematic interest. For 40 years, he’s been studying psychology, noting its brittle nature, focusing on how easily mind and morals can be altered by a slight change in circumstance. And he’s found ways to represent those shifts aurally, visually, and narratively. He’s a poet of the unstable – of unstable minds, unstable hands, an unstable nation.

His latest, Dying of the Light, is about a CIA agent (Nicolas Cage) diagnosed with terminal dementia who remains determined to kill an old, forgotten enemy on his way out. Cage’s Evan Lake has been replaying a Gulf War-era incident with Muslim operative Muhammad Banir in his head for decades, and remains convinced his enemy remains alive, despite official government reports to the contrary. So when the diagnosis arrives, he decides he’d rather spend his last days hunting down that “asshole” than pushing papers from his Washington desk.

We have two men representing opposing political ideologies, battling it out to the death, while ignoring the fact that they’re both marching toward irrelevancy for reasons far more cosmic than political. Consider the phrase Schrader kept using in interviews to promote The Canyons: “post-empire.”

And who better to embody the specter of a morally ambivalent and deeply troubled national consciousness than Cage? Even throughout his run of direct-to-VOD thrillers, he’s maintained a persona defined by an inextricable blending of rage and melancholy. (Herzog’s Bad Lieutenant is defined by it – Cage staring at fish, dreaming of their dreams, halfway jealous.) His tragically shaky antics, almost always attributed to his character’s past traumas, render him a living monument to regret. If there’s an emotional effect to the psychological journey played out here – Lake goes to Bucharest, hunts his enemy, and lines him up in the sights, only to reach psychological peace, leaving him conflicted about committing yet another kill – then it’s thanks not to Schrader’s plotting, but to Cage, whose manic presentations of vulnerability have never failed to ring hauntingly true.

Schrader’s direction, alternatively, often gives in to the standard-issue cop-movie nature of his screenplay. An early car chase, featuring none of the major characters, provides nothing more than an unnecessary MacGuffin, and a later shootout is equally uncalled for; these are concessions to the genre. His political criticisms render clearly – American flags abound, rendered dull and faded by the film’s stark, monochromatic color scheme – but that’s often thanks to their unsubtle placement. Only occasionally does the film find a way to represent Lake’s slow walk to the gallows lyrically, as in a moment where the brain waves of Lake’s failing mind are aesthetically linked to the flashing lights created by the shadows of a ceiling fan. Schrader’s signature is apparent, if muted.

Dying fits into the oeuvre, if not snugly. But it also should be placed within a cycle of contemporary commercial films casting aspersions on the moral superiority of both American life and capitalistic politics. Like American Sniper, here’s a film that sets up its conservative hero and his Middle Eastern rival not as opposites but as mirror images: for the former to kill the latter, he’ll have to kill much of himself as well – doubts, mistaken beliefs, ego. This brings to mind a collection of other far-left-leaning pop-films that find our way of life – the concept of the American Dream itself – particularly dubious: Nightcrawler’s gaze at death incurred by corporate lingo and unregulated industries, A Most Violent Year’s lament for the impossibility of moral management, Foxcatcher’s conception of America as a land of slaves and slavemasters, Fury’s abject refusal to render Americans the “good guys” even when fighting fascism, the entirety of Inherent Vice.

One of Schrader’s big moments here is a long shot that dollies up to Cage as he gives a speech about the importance of American values. Later on, Banir monologues away a similar take: He tells Lake that the “American way of life” is a religion in and of itself, founded on ego and ambition rather than worship and faith, and suggests that Cage fights for it no more or less honorably than Banir does for his own God. The American Dream may be our religion, yet – as always with Schrader – the circumstances are shifting. We’re converting to atheism.

Postscript: Schrader, along with many other members of the crew, has recently disowned Dying of the Light. A recent Film Comment review (posted under an apparent pseudonym) describes the differences between the film Schrader turned in, and the film that was released and reviewed here.

One thought on ““Dying of the Light””