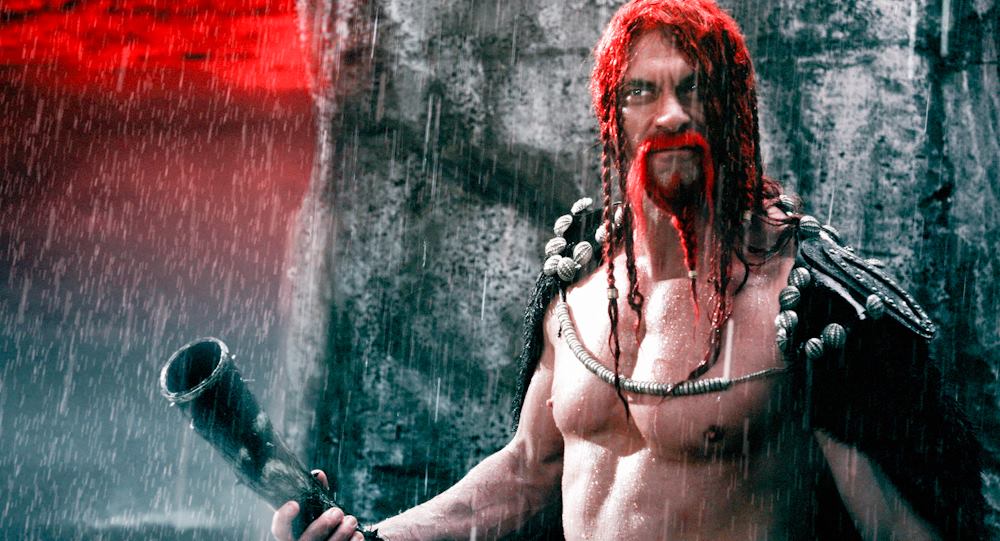 The skies in Vikingdom are never quite right. They are either too-bright and hazy, the way that a light screen of clouds can sometimes make the sun seem more oppressive than its unfiltered glow, or colored with blood. Made on a low budget, the film nevertheless apes, on a less technically competent scale, the sort of chromatic fantasia that characterizes Thor. Vikingdom itself is one of those hacky ripoffs that can be triangulated as cribbing from Marvel’s Norse-related movie, Lord of the Rings and the video game God of War, a hodgepodge of blatant influences that tries to replicate the charms of those projects with a total budget roughly equivalent to that of the catering on either of the two major film franchises.

What’s amazing is that, when focused solely on the action, Vikingdom isn’t half-bad. Slo-mo is used in half-second bursts, freezing a leap or a fatal sword blow for just long enough to turn the moment into a comic-book panel before speed resumes and some poor fool is dispatched. Eirick (Dominic Purcell), a slain and revived Norse king tasked by the god Frey to kill a rampaging Thor (Conan Stevens), assembles a crew of fighters who resemble a RPG’s class selection. There’s fellow swordsman Sven (Craig Fairbrass), archer Brynna (Natassia Malthe) and freed Chinese martial artist Yang (John Foo). Each is lovingly filmed shooting, punching or running through foes, with cuts on the swing of sword and axe to add a jolt to director Yusry Abd Halim’s fast, smooth tracks and wide shots.

When everyone stops to talk, however, the film devolves into thick patches of needless exposition on the increasingly convoluted plot, Norse mythology, Christian belief and simple backstory. The actors, all chosen for how well they cut an action hero profile, handle long speeches with halting stiffness, as if reading their lines from cards off-camera. Sometimes the long dialogue scenes comically interrupt sequences otherwise leading toward more action, as when Eirick confronts an army of ghoulish spirits, only for them all to shoo away so he can talk with his late father.

Yet the film is truly at its best neither in full combat nor speech, but rather in the tiny details that poke out from around cost-cutting measures. The weapons, especially Thor’s Mjolnir, look unabashedly fake, and at times they take on the look of silent-era props, unconcerned with realism but with a fantastical artifice that lends a childlike nature to killing sprees. The CG backgrounds work similarly, as flat as hastily done matte paintings. One scene, involving an undulating wall of gold-painted women beckoning to our hero, is like a gender-flip of the great scene in Metropolis of male hands reaching after the robot dancer. It’s all so agreeably weird, befitting a film that mashes up sword-n’-sandal grit with martial arts and epic mythology, all produced by a studio owned by a Malaysian pop group (of which Halim is a member). Vikingdom is absurd and sometimes leaden, but as a lark on Norse mythology, it’s a hell of a lot more fun (and better shot, cheap digital and all) than Marvel’s overstuffed pictures related to the god of thunder.

Epic Pictures’ DVD is a no-frills affair, ably capturing its slick digital images and offering a loud-but-not-reference-quality 5.1 track. A half-hour making-of is almost overkill for a project like this, as well as an overly serious discussion by the cast and crew about the choices they made for this silly piece of escapism. A music video of the song that plays over the end credits, though, is far more in the spirit of the movie, a hysterical piece of heavy metal set to footage from the film that looks so much like the vast majority of metal videos one can’t help but laugh. I can’t imagine anyone wanting an in-depth look at the film, and Epic’s DVD serves its purpose: to offer an oddity that stands above most of the cheap shelf-stuffers that give stores the illusion of a wide selection. Hell, it’s better than some of the marquee titles next to whom it will sit.