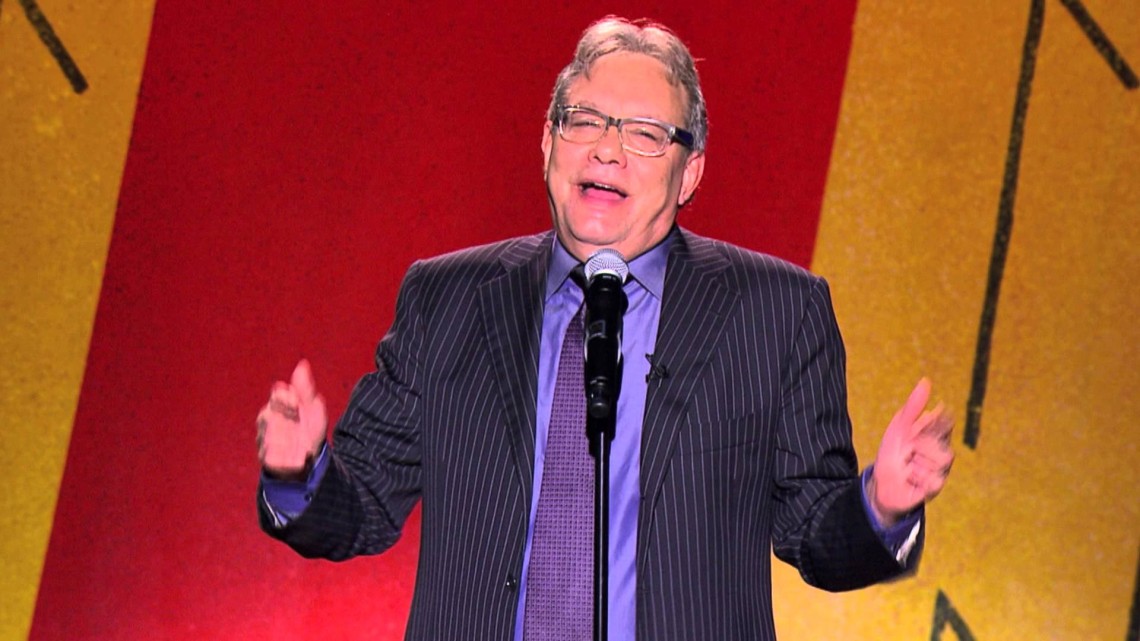 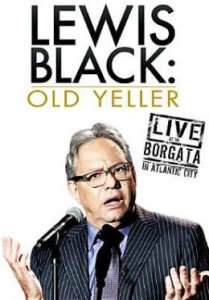 It’s been a few years since I’ve listened to Lewis Black. Like many, I came to the comic after his breakout appearances on The Daily Show, bolstered by a well-timed series of albums that positioned him as the Last Sane Man literally screaming in the face of the Bush decade. Fitting, then, that the last of his albums I bought was his final release before the end of the Bush administration, Anticipation. Perhaps looking forward to a new era himself, Black filled the album with more personal material. For me, it didn’t connect as strongly, and I drifted away from the comedian.

Black’s latest special, Lewis Black: Old Yeller — Live at the Borgata in Atlantic City, opens much like Anticipation. It includes his usual, self-deprecating acknowledgment of crowd applause, and makes note of both his parents in attendance and his father’s artwork used as blow-up graphics behind him. In short order, however, his personal recollections turn to a treatise on the failure of the Baby Boomer generation, which then bounces to a breakdown of Social Security’s stability via an attack on its bad math.

All of Black’s tics are still in place: his bobblehead shake, the arthritic-Jagger jabs of his index fingers to add gestural punctuation, the lock-jaw clench of his most apoplectically hissed lines. Yet for the most part, Old Yeller displays a calmer, or at least more resigned comedian: the shouts still come, but Black mainly speaks with a sense of dejection. His weariness, contrary to the title, appears to come less from his age than the toll the 21st century has taken on him. He raged at the self-evident incompetence and mismanagement of the Bush years, but the colossal failure of that administration sloughed off the face of the system and revealed the insoluble quagmires and rigged decks that make it work, and being pithy about an insurmountable problem that has become self-sustaining and thus offers no human target is much harder.

One of the show’s extended bits consists of a delineation between Democrats being dumb and Republicans stupid, the gist being that the former is banal and unfunny while the latter is so dangerous and unaware that it at least offers the side-benefit of being hilarious. That by no means spares Democrats his anger, only that the comic can only look at those who fail to improve things with disgust and those who actively seek to make things worse with an absurdist streak.

If Black’s reserve matches a regretful view of the failures of the Obama administration to redress its predecessor, the material toward the end of the 80-minute set nonetheless turns to cranky heckling over Kids These Days, with extended bits about iPhone solipsism and overmedicated children. These topics have been sucked dry of meat for years, and apart for Black’s wistful envy to have grown up in a time when high-quality speed could have been legally prescribed to him to get through school, he offers no new insights onto the millennial equivalents of O.J. jokes.

Old Yeller finds Lewis Black growing ever more sure of himself as a comedian: he rarely stumbles over his invective the way he could sometimes over-excite himself in the past, and it’s a shame that his impeccable timing can be overlooked in the face of his fury. But so much of the setlist here seems merely a deflated revision of material he covered years ago; even the Democrat vs. Republican bit is a variation of his old “Democrats are a party of no ideas; Republicans are a party of bad ones” routine. Black broke out in his 50s, and as such he has not been around long enough to adopt the kind of elder statesman persona he intermittently projects here. Even so, it’s good to catch up with the comedian, to see that he is still recognizably him without, despite the repetitive bits, lapsed into self-parody. Like many political comics, Black cannot hide the disappointment of his cautious optimism for the Obama administration proved futile, but in the set’s best moments, he creates a throughline with his older jokes that adapts to new management while calling attention to its “plus ça change, plus c’est la même chose” constancy.

Image Entertainment’s DVD dutifully presents Old Yeller, which looks like any other comedy special: perfunctory camera work with decent-quality images, and a soundtrack that reckons only with the star’s voice and an occasional swell of crowd appreciation. There’s not much to say about it, nor should there be.

The disc contains no extras.

Lewis Black finds himself at a crossroads facing retirement age in a bleak world, with a mixed-quality set to match.