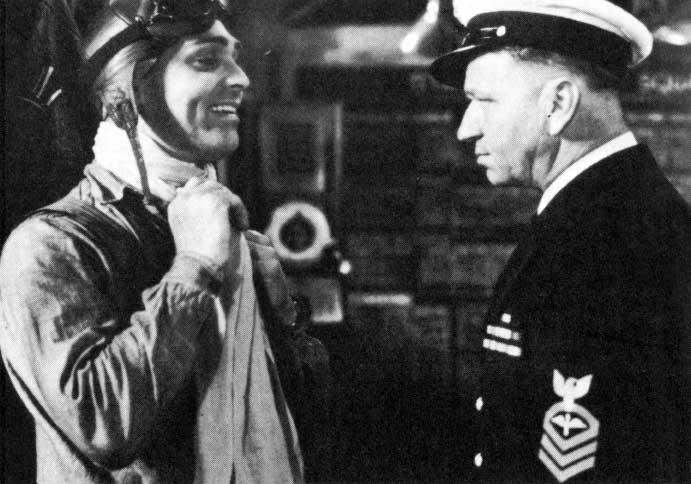 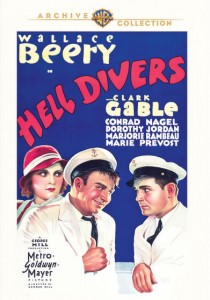 From the moment Clark Gable’s gunner Steve Nelson comes into frame in Hell Divers, it’s obvious the man was born to be a star. Sitting among the other Navy pilots and gunners as they review footage of practice maneuvers (with shot photos of pretend fire amusingly used to stand in for live ammunition), Gable’s Nelson crows over his impressive accuracy as the other men bask in his presence.

Just compare his rakish good looks to those of “Windy” Riker (Wallace Beery), the veteran expert shot whom Nelson outperforms in the exercise. Beery lives up to his surname with his constantly fixed scowl, wrinkled uniform and a burly tone of speech tinged with a slight perma-slur of hard living. More experienced, Windy also looks more haggard and weary, and if he enjoys a history with the men, Nelson’s dazzling skill and magnetic charisma threaten to unseat his hard-won place of affection and respect.

Latent homoeroticism is such a common feature of old military movies it’s scarcely worth noting, but the jealous rivalry that breaks out between Windy and Nelson is so charged with masculine angst that it overwhelms the picture. Windy even gets Nelson’s fiancée out of the picture as soon as possible, all the better to devote time to the pair’s endless pissing matches.

Gable, in his first starring role, often has to do little more than to stand near Beery to set off Windy’s insecurity. At once effetely trim and rugged, Gable manages to give the impression of both well-born living and hard-earned experience. Beery’s Windy may be the more outwardly aggressive, but Nelson, too, can be violent when he pleases. Gable naturally hogs the spotlight, but Beery does everything to steal it from him. His Dionysian performance recalls those of Michel Simon, an unattractive mound of flesh who makes so plain his wants and hates that he becomes somehow a sexual being. His unabashed longing, whether Platonic or otherwise, for his comrades comes out most explicitly when he sets aside his peevish war with Nelson to sneak away and say goodbye to his maimed pilot, almost childishly admitting how much he’ll miss the man.

The flight scenes, a combination of stock footage, filmed flying and some clever miniatures, are cleverly staged and often tense, as in an early scene of a half-deployed bomb that makes Nelson the hero of the unit for his quick thinking, or in the fatal climax. George Hill’s sturdy direction edges this closer to Hell’s Angels than Only Angels Have Wings, but the combination of Beery and Gable’s jockeying for position and the harrowing, dangerous flying sequences makes Hell Divers more than just a footnote for Gable fans.

Warner Archive releases are never too polished, indicative of their entire M.O. of specially making select titles to order instead of mounting expensive productions at a loss. Sure enough, Hell Divers has a soft flicker and a number of instances of print damage, but for the most part it looks solid, with good detail and healthy grain. The audio is reflective of early talkies, with tinny, blunt dialogue mixed high in a mono track. The rumble of plane noise often drowns out speech when the pilots and gunners are in the air, yet in general their conversations are as mixed just as bluntly, if sometimes too softly, as the roar of propellers and chug of machine guns.

A theatrical trailer is included.