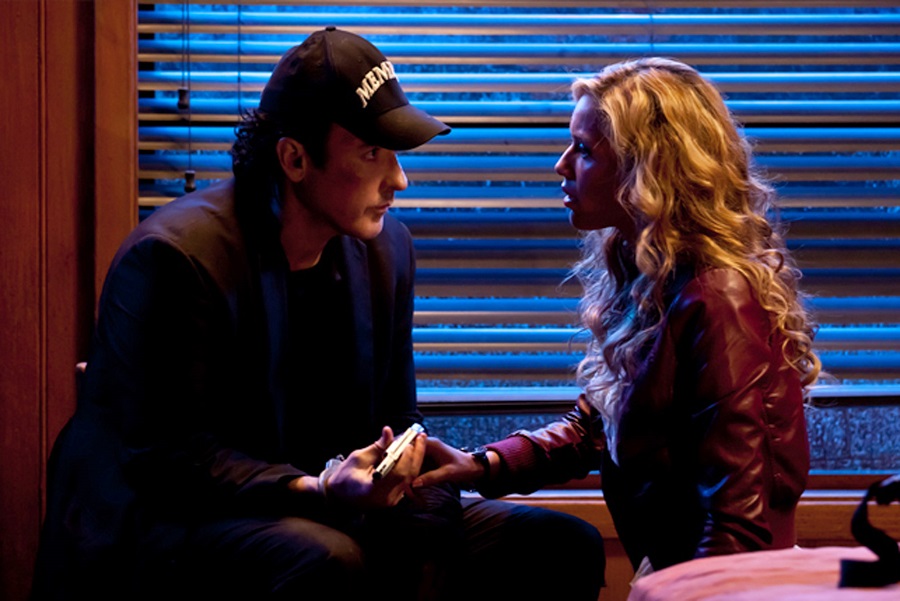 Don’t Look Inside “The Bag Man”

Growing up on a steady, diverse stream of cinema is one major prerequisite to becoming a filmmaker. Equally important, however, is the possession of personal vision. David Grovic, the first-time director of Cinedigm’s The Bag Man, clearly has the former requirement under his belt, but he so profoundly lacks anything in the latter department as to be near-comical. It’s vital for artists to know their medium inside and out, so maybe Grovic should get points for having mostly excellent taste in film; tragically, his movie-watching habits don’t lend themselves to the experience necessary to put his stamp on the disparate materials he’s collated here.

Had Grovic bothered to finesse any fresh ideas out of The Bag Man‘s screenplay, it might have succeeded as a work of blatantly referential pulp, a Tarantino-inspired crime movie laced with the oddball vagaries of David Lynch’s filmography; instead, he simply stitches carbon copied flourishes from each of these filmmakers (and many more) together in the most purely functional way. The Bag Man “works” as a film, in the sense that there’s a clear beginning, middle, and end, as well as an easily discernible plot. There’s a story here. The problem is that the story has been told with greater skill countless times in countless other formats.

We begin with hitman Jack’s (John Cusack) furrowed, disinterested brow as he receives instructions from his boss, Dragna (Robert De Niro), regarding the eponymous MacGuffin. It’s a handsome enough pouch, one whose contents are kept a mystery from Jack for nearly the entire film; his sole task (as he’s instructed multiple times in the same scene) is to hold the bag at a remotely situated motel, await the arrival of the bespectacled Dragna and never, ever look inside the parcel. Sounds straightforward, though of course these things are seldom easy. At one moment or another, a gangster’s best-laid plan begs to be steered off course.

And so Jack’s night begins. An off-screen attempt on Jack’s life drives home the point that the bag is bad news; from there, he spends his time looking at everyone and everything as a potential foe, from Crispin Glover’s creepy motel clerk, to Rebecca Da Costa’s possibly duplicitous femme fatale, to a handful of corrupt county sheriffs led by Dominic Purcell. Grovic wants to set his audience off-kilter with an endless parade of quirky characters right out of Twin Peaks; in his (and their) defense, his scheme mostly works, but as time goes by and Jack is continuously forced to off people, it becomes obvious that they don’t mean anything to Grovic or to his film.

Evaluating The Bag Man‘s flaws is nearly a Herculean effort; there’s no one area in which it specifically fails. The film rather spectacularly stumbles from every available angle, misfiring on so many cylinders that the very best element on screen winds up being latter day Robert De Niro, sporting Coke bottle glasses and Tim Burton’s hairdo. There’s both too much and too little of Bobby throughout this yarn; he’s easily having the most fun out of everyone here, enjoying himself in straight-up defiance of Grovic’s incompetence as well as the general apathy of his fellow cast members. Nobody else involved here – the cinematographer, the gaffer, the production designer, almost certainly craft services – seems to give a damn, or if they do, they’re rendered awestruck by the film’s sheer atrociousness.

Maybe this isn’t a case of the director being a hack; maybe it’s a case of simply being new to filmmaking. Then again, maybe not. Grovic borrows from so many sources that it’s hard to even catch a glimpse of who he is as a filmmaker in an hour and forty minutes of running time. The aforementioned traces of Tarantino and Lynch lend The Bag Man its most noticeable bouquets, but a few liberal doses of seasoning from David Fincher’s Seven and even Roman Polanski’s Cul-de-sac round out Grovic’s palette here; unlike Tarantino, the master of referentialism, he can’t synthesize these sources into something that crosses the line from “cribbing” to “homage”.

So The Bag Man ends up being a misshapen abomination of a movie, one that doesn’t have a visual, textural, or narrative identity of its own; it’s such a disaster that it could feasibly land its participants in actor and director jail for the next decade. Cusack, who could do time for terrible films like he’s plugging the meter, plays to the camera with the utmost dispassion; he might care more about being denied future work if he wasn’t already in approximately one thousand films in 2014. Perhaps he knows he can do better than this, too, but he can only stare helplessly at his audience as he suffers the ignominy of serving as a makeshift urinal for an ill-tempered Martin Klebba. If that’s not a comment on Cusack’s career, I don’t know what is.

Happily, there’s enough rank weirdness stuffed into The Bag Man that it goes by quickly; you won’t be able to tell what’s happening half the time, but at least it happens in a timely fashion. That’s a small mercy, though. Movies this bad don’t happen every day, and it goes without saying that when they do, they’re best avoided. Does Grovic have a great movie in him somewhere? He’s such a non-entity in this project that the question is scarcely worth posing.