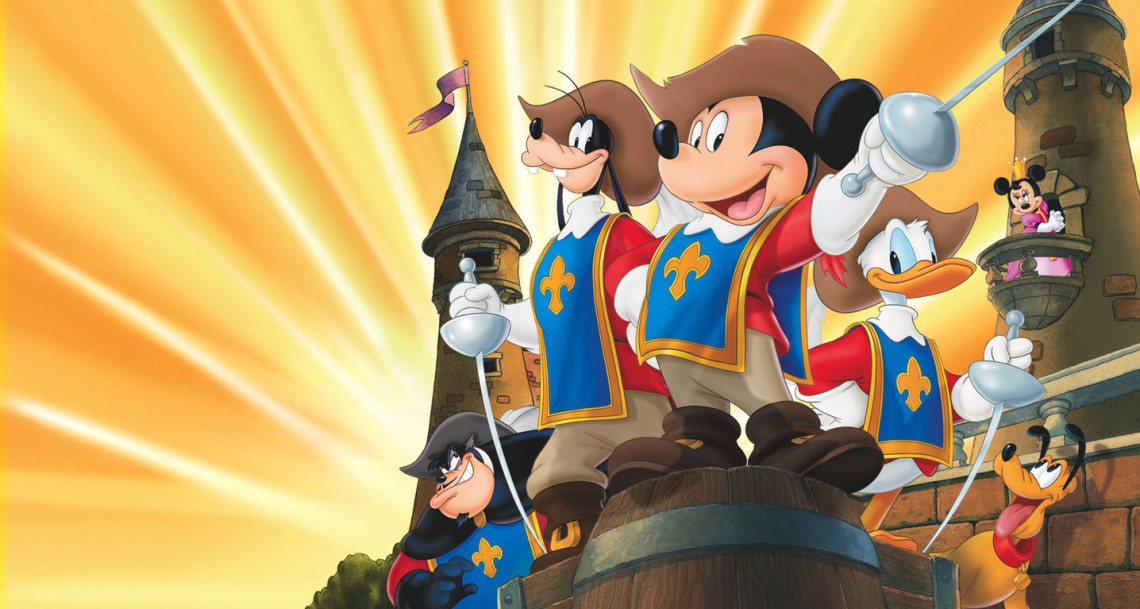 It is, the Blu-Ray cover trumpets, the 10th anniversary of Mickey, Donald, Goofy: The Three Musketeers, a lightweight take on Alexandre Dumas’ famous tale. (That proclamation is reminiscent of Eddie Izzard’s bit from Dress to Kill, recounting a TV story about builders bragging about how they’ve updated a building to look as it did 50 years ago. “What? Surely, no! No one was alive then!”) You are forgiven for not realizing that such a film existed, unless you happen to be the parent of a small child, or someone who was a small child in 2004. Any appeal here may be in seeing Mickey Mouse, Donald Duck, Goofy, Minnie Mouse, Pluto, and Daisy Duck in a feature film together, but said film is nowhere near as interesting as you might hope. The story and design are woefully generic, all the way down to the songs. (The lyrics are all original, but the music is just classical pieces like “The Nutcracker Suite” and “The Blue Danube.”)

Here, Mickey, Donald, and Goofy are all lowly janitors in Paris who dream of being musketeers like their heroes. (The story is, you may not be surprised to learn, nowhere near the Dumas original, as characters like Porthos and Athos are mentioned by name early on, but never again.) Pegleg Pete scoffs at the very notion, but when he realizes that their ineptitude may be the key to overtaking the throne from the princess (Minnie, natch), he promotes the oblivious trio. Hijinks, wackiness, and the like are intended to ensue. Both because the animation is so uninspired and sickly-shiny, as well as because the plot is so uninvolving, there’s nothing to recommend about this B-picture. Maybe you are the biggest fan of Mickey Mouse or Donald Duck in the world. (Or maybe you love Clarabelle Cow. You are in luck with this one, at least.) So maybe you must have this copy. But even as a time-waster, this kind of falls short. What’s more, it’s head-scratching to wonder why this, of all movies, is getting a Blu-Ray release before something like Aladdin or any number of Disney live-action films. Frankly, it’d be more interesting to debate that notion for 75 minutes than to watch this movie.

Mickey, Donald, Goofy: The Three Musketeers, being a recent enough release, looks about as well as can be expected for a DisneyToon Studios release. Thus, it looks almost too polished, too finessed. The titular trio no longer have much personality in their character design, which is a shame. But again, most of this (if not all of it) can be laid at the hands of the animators, not the people behind the Blu-ray transfer. The audio is decent, if unremarkable.

Amazingly, there are deleted scenes from this trifle, complete with commentary. There’s also a standard-issue behind-the-scenes featurette hosted by Monica Lee (a Disney Channel starlet from a decade ago), a faux-MST3K commentary from Mickey and the gang in character for about five minutes’ worth of the finished product, and a couple of music-related supplements. Save for an extra encouraging kids to dance to the film’s opening number, there’s nothing new on this disc. (And it’s perplexing as to why the dance-party thing is new at all.)

Completists and anyone looking for a new way to occupy their kids for an hour should check out Mickey, Donald, Goofy: The Three Musketeers; others can (and should) steer clear.