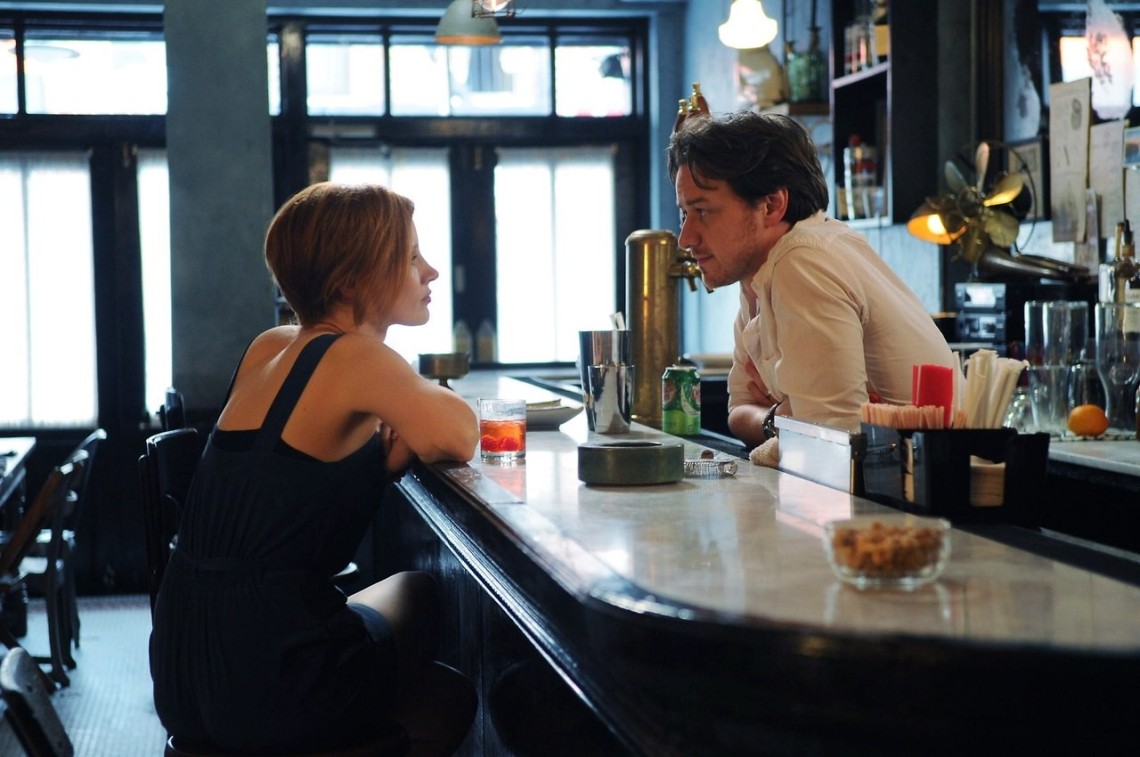 You’re Going to Lose that Girl, “The Disappearance of Eleanor Rigby: Them”

We’re introduced to an adorable couple short on money by the names of Conor Ludlow (James McAvoy) and Eleanor Rigby (Jessica Chastain). We were spared a Jude-Eleanor Rigby love story, so stay with me here. They dodge their restaurant bill and have a romantic romp in a New York City park while admiring fireflies. Everything points to a peachy relationship. The next scene cuts to Eleanor on the Manhattan Bridge, then jumping off of it, for some reason never fully explained. Depression? Death in the family? Oh, details; those help. The rest of the two or so hours is spent by not-Jude trying to win her back and get some answers. But can we really ever understand an answer if we don’t know what the question is from the first hour of the movie?

As wonderful as McAvoy and Chastain are, it’s difficult to stomach the painfully written dialogue and character stagnation as any form of a story. Much of the runtime is dedicated to pained or expressionless closeups. Eleanor takes to academia for her recovery, spurning her tenured psychologist father’s therapy advice. She picks the class of an unamused Prof. Friedman (Viola Davis), whose role in this film I can’t pinpoint beyond being the token person of color who listens to white people’s problems to make them feel better. Conor is equally problematic, taking up stalking his ex to win her back. Who exactly are we supposed to be rooting for? Them is so disjointed, it feels like an avant-garde mood piece about watching people crying, but we don’t know why they’re crying.

Other fine actors don’t quite know what they’re doing here either. French acting legend Isabelle Huppert seems rather unconcerned about her daughter’s well-being unless it is accompanied by a glass of wine. Willam Hurt seems baffled by the dialogue, as if struggling to recite it with a straight face as Mr. Rigby. Character actor Ciaran Hinds barely pulls off a believable patriarch for Conor, but he had one of the best lines of the movie. Conor, about to admit defeat to his restaurateur dad, is confronted with the fact that he never allowed his father to ask questions about a particular death in the family, and the question fall along the lines of “Why can’t we just talk?” Yes, please, can we talk?

Nothing in the film points to a particularly nuanced vision behind the camera, either. Eleanor’s room is sunny although her brow is furrowed or her expression slackens to a blank stare. The hues are bright and warm, dare I say pink? Switch over to Conor’s corner for cooler lights and decor. If you guessed the Him side of the story would sport a touch of blue, you would be right. Occasional neutrals, like when the couple is shown in happier times, are fair, but nothing stands out in the hodgepodge of the he-said, she-said half-gossiped yarn.

The Him and Her portions of the trilogy apparently allows the story to breathe and gives the characters more development, since it’s the same story from Eleanor and Conor’s different points of view. Yet with a release date still a month off, nothing in Them indicates that I need to give these characters more time to explain themselves. I like ambiguity fine, but to have two people with problems sit on the big screen and not tell you what their problems are is an exercise in frustration, scrambling for crumbs of what precious little information director Ned Benson does decide to divulge. The story might make sense to Benson, who has been working on the story for so long that he and Jessica Chastain were then roommates, but for the rest of the moviegoing public? Six hours to hear the whole pretentious saga of Eleanor Rigby? Let me spend the day in the Yellow Submarine instead.