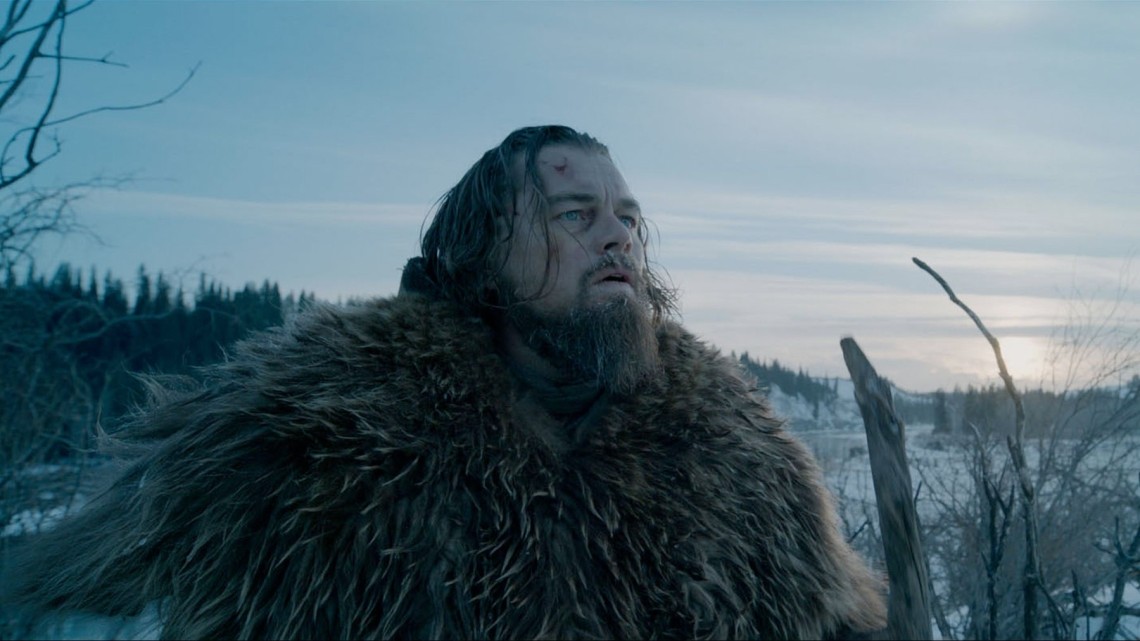 Method Men: DiCaprio & Hardy from “Inception” to “The Revenant”

A look at the recent trajectories of Leonardo DiCaprio's and Tom Hardy's careers.

Five years ago, Leonardo DiCaprio headlined Inception, Christopher Nolan’s original science-fiction thriller, as the leader of a group of criminals who break into the human mind to meddle with its thoughts and introduce fake ideas for their gain (or for someone else’s). Dom Cobb is something of a prototypical DiCaprio character: determined to the point of frantic desperation, haunted by a personal tragedy, hyper-intelligent, and fairly humorless. Dom’s motley crew included a neophyte (Ellen Page), a debonair young turk (Joseph Gordon-Levitt), and a louche Brit who provided the majority of the film’s dry comic relief. The latter was played by Tom Hardy, a couple of years before he appeared as the masked villain Bane in Nolan’s next film, The Dark Knight Rises, and became the stuff of internet memes. The two men, DiCaprio and Hardy, could not have seemed more different in Inception: one was almost deliberately stiff and grim, while the other was as freewheeling as could be allowed in a Christopher Nolan film.

In the time that passed between Inception and now, Hardy’s career has soared to a point where it’s come close to matching his co-star’s. DiCaprio is still one of the biggest names in Hollywood, and two of his most memorable roles in the intervening period—as Calvin Candie in Django Unchained and Jordan Belfort in The Wolf of Wall Street—represented a shift from his traditionally intense and darkly dramatic characters. Tom Hardy, however, has vaulted to the A-list (or to the very top of the B-list, if you’re feeling uncharitable) in the last half-decade. Since Inception, Hardy has become almost as ubiquitous as DiCaprio in his adult phase, appearing in films as disparate as the Western picture Lawless, the one-man-show Locke, and as the title character of Mad Max: Fury Road (though he’s really the support for the true lead, Charlize Theron’s Imperator Furiosa). Hardy is quickly becoming as recognizable as DiCaprio, somewhat less for the types of roles he plays—except for his ever-changing accents, Hardy’s roles are harder to pin down as being thematically similar—as much as for his prickly-bordering-on-jerky real-life persona, which became even more amplified in an Internet scrape with HitFix editor Drew McWeeny.

In the latest film from Alejandro G. Iñárritu, The Revenant, DiCaprio and Hardy go head-to-head—literally. In this based-on-a-true-story revenge epic, DiCaprio plays Hugh Glass, a fur trapper guiding a group of Americans through the wilderness of the Louisiana Purchase as they evade a tribe of Pawnee Native Americans and the desolation of Mother Nature in the winter months of the 1820s. Hardy plays John Fitzgerald, the most frustrated and belligerent of the men following Glass, as well as the most selfish, and the most bigoted. Glass is accompanied by his son, who’s half-Native American. (Glass’s Native American wife is dead when the film begins, and literally hovers over the proceedings at one point as a spectral figure.) This fact is one that Fitzgerald relishes pointing out in the cruelest and most racist ways possible. Soon enough, bigotry is the least of Glass’s issues: he’s mauled by a bear and barely clings to life; at first, the men try to keep him alive in hopes of reaching their encampment soon, but Fitzgerald ends up being one of two men from the overall group to remain to make sure that the guide is given an appropriate burial. Unsurprisingly, the worst happens: Fitzgerald heartlessly murders Glass’s son, and leaves the trapper for dead. In spite of all logic, Glass doesn’t die, but lives so he can hunt Fitzgerald down and exact revenge.

To watch DiCaprio and Hardy in The Revenant is to watch warring styles of acting, butting up against each other like Glass and the bear that mauls him. Much has been made—to the point where “much” is now a gross understatement—about the generally tough environment in which The Revenant was made, and the lengths that DiCaprio took to bring a fully lived-in aspect to his performance. (What was once “I ate a raw bison liver during filming” has now been repeated so frequently that it sounds more like “I slaughtered a herd of bison, ate all of their livers with fava beans and a nice Chianti, and then I wore one of their skins so I could go undercover as a bison and see if I could fool other herds.”) Hardy’s experience wasn’t quite as rough, but it did further solidify his status as a difficult actor to work with, which oddly fits the character of Fitzgerald perfectly. Glass and Fitzgerald are posited as extreme opposites on the spectrum of masculinity throughout The Revenant: the former is fierce, but always loyal, goodhearted, and appropriately paternal to his teenage son, while the latter is cowardly, selfish, greedy, and slovenly.

It’s easy—maybe a little too easy—to make fun of DiCaprio for his preparations for The Revenant, but the way that he works the press versus how Hardy works is a fascinating contrast. DiCaprio has been a movie star for the better part of his life (we’re only a couple years away from the 20th anniversary of Titanic), whereas Hardy has only recently become a name actor of some renown in the last few years. (In 2002, Hardy played the villain in Star Trek: Nemesis and almost had a brief run-in with fame, had the movie been a bigger hit.) Both actors occasionally go to extreme lengths for the characters they play, whether it’s eating bison liver or piling on the Coke and Haagen-Dazs to turn into feared British criminal Charles Bronson. They embody the modern version of a performer like Robert De Niro circa Raging Bull, less an actor than a Transformer. 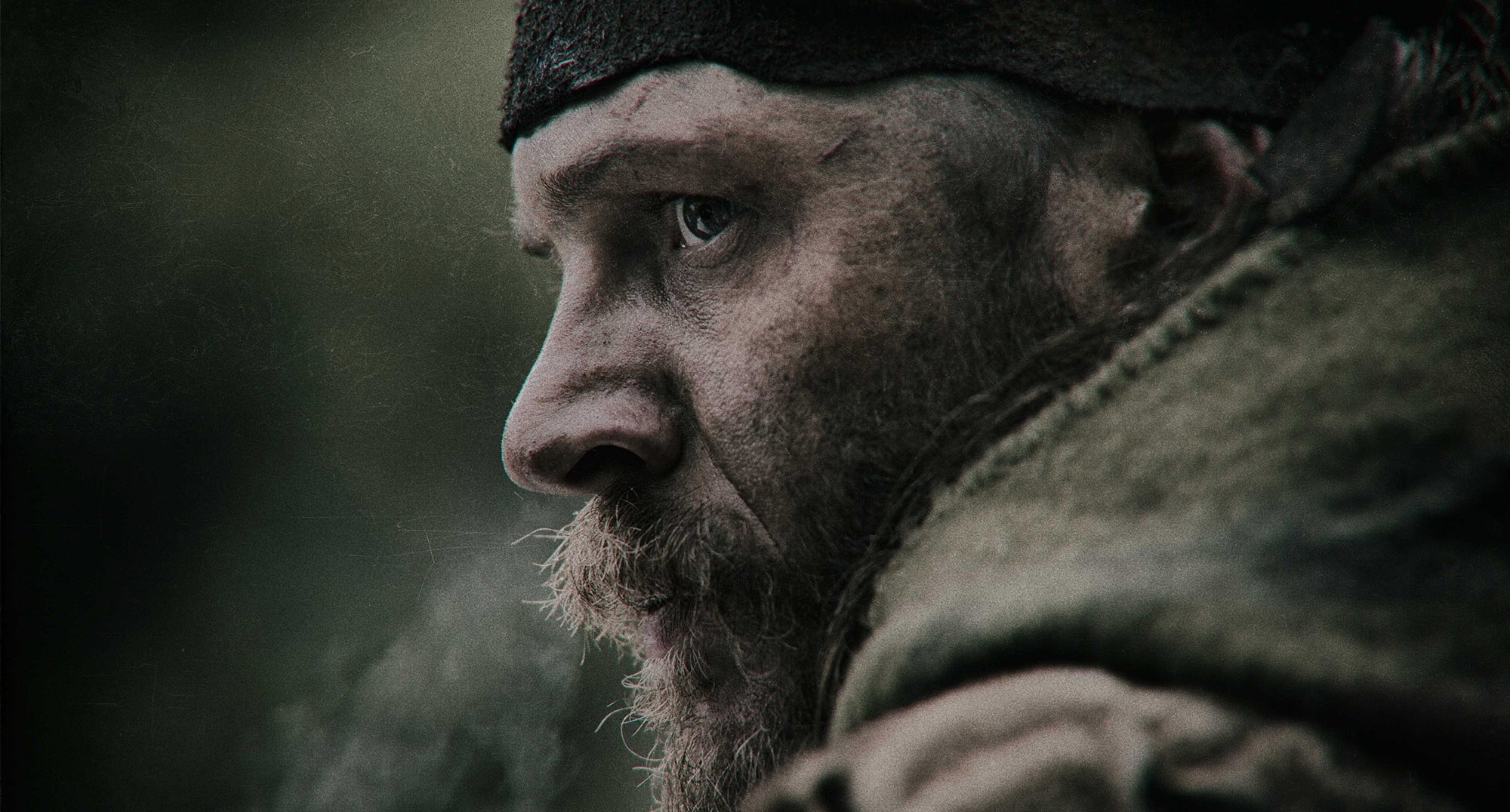 While Hardy’s instantly GIF-ed scoff at a critic’s inane query about feminism at Cannes, regarding Mad Max: Fury Road, was proof that being grouchy isn’t always a bad thing, DiCaprio is better able to finesse his way through the awards-hungry media at this time of year. All the same, the British actor is better at the act of transformation even in films that don’t deserve his chameleonic qualities. Films, like say, The Revenant—a film that’s at its finest when it’s not trying to say Something Very Serious About The Human Condition, or at least, Something Very Serious About Men. The basic quest for retribution is simplistic, perhaps, but it’s a better driver of character development and plot than Iñárritu’s periodic dips into faux-Malickian naturalism that curdle here into graduate-school-level visual philosophizing. Hardy’s Fitzgerald is nearly a caricature of unfeeling wannabe masculinity, bullying a younger man (the now-mythic Jim Bridger, played adeptly as a bundle of awkwardness and nerves by Will Poulter) and bluffing his way across the expedition, even after he returns to the fort and acts the innocent in front of Captain Andrew Henry (Domhnall Gleeson, unable to take a break from being in every other film released in 2015).

Glass is similarly caricaturistic, as DiCaprio plays him, but the difference between the two is simple and evident in each scene. DiCaprio and Hardy may both share space on the A-list now, but in different roles: DiCaprio is a Movie Star and Hardy is an Actor. Every scene in The Revenant may be remarkably staged—Iñárritu and cinematographer Emmanuel Lubezki do a predictably impressive job of choreographing a series of action setpieces, including the gruesome bear attack, as single-shot sequences—but feels rigorously planned. The same can be said for DiCaprio’s performance, because it never stops feeling like Leonardo DiCaprio is going through this trial by grizzly bear, not Hugh Glass. In a key moment, Glass has to huddle inside the insides of a dead horse for a brief bit of warmth, cutting his way into the beast and using it as a makeshift sleeping bag. What should be a moment of harrowing honesty, displaying how far this man has gone and how much further he’s willing to go to get some kind of frontier justice for the death of his son, if not his own pitiable treatment, instead calls to mind the question, “Is Leonardo DiCaprio the big fan of Ace Ventura: When Nature Calls, or is that Iñárritu’s parallel to Terrence Malick loving Zoolander?”

Hardy, on the other hand, burrows inside the character of Fitzgerald, creating a disgusting portrait on his own in ways that seem effortless. Fitzgerald, evidenced by his mealy-mouthed accent and vague braggadocio, is so misguidedly arrogant that his inevitable fall is all the more compelling because of his own lack of self-awareness. He’s as tragic a figure as Glass, if not more so. There’s little surprise in the film on the whole—the story slowly trudges to a finale in which each of these characters wind up pretty much exactly where you presume they will by the end of the first act. So what joy there is to find in this intentionally visually grim picture is in the performances from those aside from DiCaprio. It’s not that DiCaprio is hammy or painful to watch as Hugh Glass, it’s that the actors surrounding him have more room to become their characters because they have no movie-star status hanging around their neck like an albatross. Hardy is equally matched by Poulter and Gleeson; for all the noise about how much DiCaprio had to endure in the wilderness, it looks like Hardy, Poulter, and Gleeson did go through the same gauntlet, where DiCaprio feels more like he’s play-acting, wading into the waters instead of diving into the deep end.

The Revenant will change little for the career trajectories of either DiCaprio or Hardy. The major shift for DiCaprio may be that he finally wins a Best Actor Oscar after losing four times over the past 20-plus years, though if he does win, you get the sense that he’s winning less for this specific performance, and more because “he deserves it.” (And he deserved it for other performances, such as his work in either Django or Wolf.) Hardy will continue alienating some members of the press, pushing back against directors even in spite of turning in memorable performances, and working with Nolan. (Hardy’s apparently in talks to appear in the director’s upcoming WWII film, though his next project is an 8-episode miniseries on FX. Not quite movie-star material; more like an actor’s material.)

In a few years, perhaps, these two men will face off against each other on the big screen again. Maybe Hardy will be as big of a star as DiCaprio. Maybe DiCaprio will be trying a little less. Hell, maybe it’ll be a comedy. (A buddy-cop comedy by Shane Black, starring DiCaprio and Hardy: I’d see it. It’ll never happen, but I’d see it.) Maybe nothing will have changed for either of them. But when they met in Inception, the circumstances were different, and the resulting film is a hell of a lot more enjoyable than The Revenant. Only a few years separate these men, but whether they’re actors, Transformers, or movie stars, Hardy is the one worth watching, just a bit more. Both Hardy and DiCaprio work their hardest on each role; only one of them makes the work invisible.