Hell Is For Real In “Deliver Us From Evil”

Horror movies seem to always go through an awkward warmup phase in the first 10 to 15 minutes. The audience has to be willing to move past whatever initial preposterousness presents itself— monsters, ghosts, evil spirits, creepy whisper kids, and hackneyed caricatures for leads. We test to see if laughter is going to work as a defense against the promised scares. Machismo courses through the theater as kids unfailingly steel themselves to announce to their girlfriends that the movie was “lame” and “not even that scary.” The genre’s tropes are recognizable to even the most novice of viewers, and the subject matter is almost always so far removed from day-to-day life as to render horror a sub-genre of fantasy. Essentially, horror directors are up against a lot.

So while director and co-writer Scott Derrickson’s Deliver Us From Evil does not avoid the curse of the first 15 minutes, the film soon makes confident moves in a direction all its own: a tale of spiritual warfare tightly wound around the spine of a police procedural. Derrickson is not just a horror geek looking to freak you out. He wants to get down to the heart of what evil is and how to talk about it. And the most frightening thing about Deliver Us From Evil is that its feet are firmly planted in the real world.

Ralph Sarchie (Eric Bana) is a hardened Bronx cop who finds himself volunteering to tackle a series of unsettling cases with his sardonic partner, Butler (Joel McHale). He comes home to his longsuffering wife Jen (Olivia Munn) in the wee hours of the morning, providing her with only silent embraces: “I walk through the sewer every night. I don’t want to come home and do it with you.” He has a daughter (Lulu Wilson) with a pesky concern about “why Daddy doesn’t come to church with us.” Between this and the prominent crucifix on the wall of the Sarchie home, the movie lays on the religious foreshadowing a little thick.

Enter Joe Mendoza (the charismatic up-and-comer Edgar Ramirez), a priest who believes Sarchie’s string of cases is tied together by demonic influence. While Sarchie is a staunch secularist, the horrific events pile up until he feels he has no recourse but to talk things out over whiskey with a man of the cloth. Mendoza becomes the Mulder to Sarchie’s Scully, and the two of them dive into the darkness together, each with something the other needs.

The remarkable thing here is that neither of these characters feels symbolic or inauthentic. It would have been easy to make Mendoza into a generic story-catalyst sage— and his smoking-and-drinking act does feel a tad calculated (as in, “He’s not like other priests. He’s a cool priest”). But he presents a consistently compassionate, reasonable viewpoint, and convinces us that Sarchie keeps coming back to him for a reason. On the subject of demons, he makes his case plain: “Every culture has practiced exorcism. Most are bullshit. But the other 10 to 15 percent just aren’t.” The relationship’s narrative hook is that Sarchie, not Mendoza, is the one with an uncanny gift for sensing evil. Sarchie calls it “hunches.” Mendoza calls it “discernment of spirits,” and it’s the missing piece in Mendoza’s mission to cast out the demons of the Bronx.

As a horror-procedural, the movie offers some truly memorable imagery amidst lots of recognizable tropes (yes, the demons snuff out the lights wherever they are). While Deliver‘s cinematography never rises to the level of its spiritual cousin, James Wan’s The Conjuring, Derrickson’s clever juxtaposition of the horrific and the clinical earns a comparison to The Silence of the Lambs. Sarchie’s police work lets him rove between crime scenes (brilliantly set-dressed with insects, decay, and the occasional crucified cat) and coldly lit government buildings. This culminates in some awesomely gruesome showdowns in a mental hospital, warehouse, and in the climactic exorcism in an interrogation room. These choices keep the supernatural grounded in the grit. 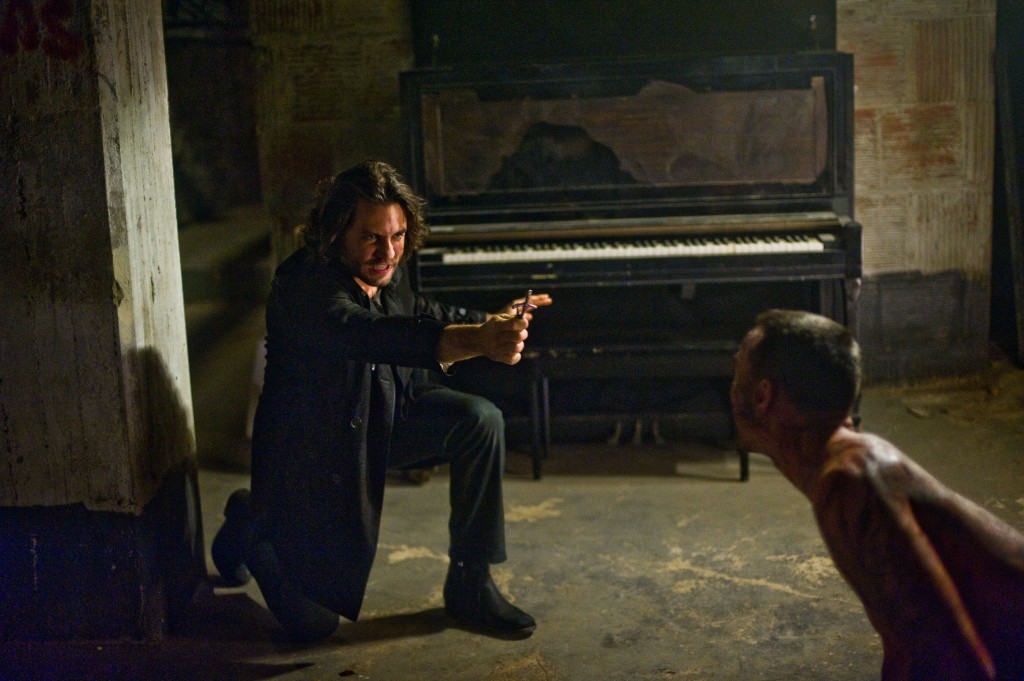 The sound design also helps with this work, as do a few choice song selections from The Doors. Listen for how the scratching sounds that terrify Sarchie’s daughter in her bedroom bridge seamlessly into a scene of Sarchie scraping paint to uncover a demonic message during an investigation. Watch for the way Derrickson puts a wide-angle lens on Bana’s face as Sarchie listens to a recorded exorcism on headphones in a crowded bar with Mendoza. The background blurs and all sound drops out but for the screaming of a young possessed girl, and Sarchie is lost in the terror of the numinous. He hits the pause button, and all at once the bar chatter rushes in and he’s back on Earth. Derrickson isn’t exempt from some of the genre’s groaner cliches (especially as concerns Sarchie’s wide-eyed young daughter and her unnecessarily creepy toy collection), but he can work some magic in the scenes where the earthy meets the hellish.

There’s one scene without a lick of supernatural influence that may be the most harrowing in the film. Derrickson uses some blurred, shaky camerawork to bring us back into Sarchie’s darkest memory— a brutal crime of his own. This reverberates with the discussion of evil that Mendoza initiates at the start of the film: “There are two kinds of evil in this life, Officer Sarchie. Secondary evil, the evil that men do. And primary evil, which is something else entirely.” While this observation seems to indicate that the film will focus on the latter, the screenplay’s best turn comes in exploring the way that outside evil arouses and makes one aware of the evil inside. Sarchie and Mendoza take to demon hunting because they’ve been doing the work on themselves already.

Deliver Us From Evil could be shown in a hilariously twisted double feature with Heaven Is For Real, a family-friendly movie from earlier this year about a child’s near-death-experience. Heaven Is For Real wears its mission in its title: to offer proof of a miracle, to convert or at least comfort audiences. Derrickson’s goal is the other side of that coin. He wants to make moviegoers grapple with darkness— both the kind buried inside each of us, and the kind so heinous we speak of it in hushed tones, that seems somehow beyond our understanding. There’s a scene in Deliver where Mendoza describes a possessed child as speaking of “things she couldn’t possibly have known,” the same proof offered of 3-year-old Colton Burpo’s divine experience in Heaven Is For Real. Both films have something to argue about the existence of the supernatural, and that alone will put off many moviegoers who might otherwise have just enjoyed the ride.

But Derrickson has something in his quest to make movies that explore that other category, primary evil. Consider the reaction to the recent spate of school shootings in Santa Barbara, Seattle, and Troutdale this last spring (recent in relative terms, of course— these horrors have been with us far too long). Amidst the requisite cries for gun control, there was another strain of response: “How?” How could this be happening again? What is it that drives people down to these depths? There is a question at the bottom of the vilest human behavior, a visceral cry of confusion, a demand for an answer. While the most practical way to talk about that answer may be politics, there is a deeper existential itch here, and that’s where the work of Scott Derrickson comes in. His films have yet to reach technical greatness, but he’s doing the audacious work of making morally serious blockbusters (much in the same way Christopher Nolan has been). Whether or not you like his answers, Deliver Us From Evil deals with the horrific in a world that looks like ours, and that’s a frightening accomplishment.