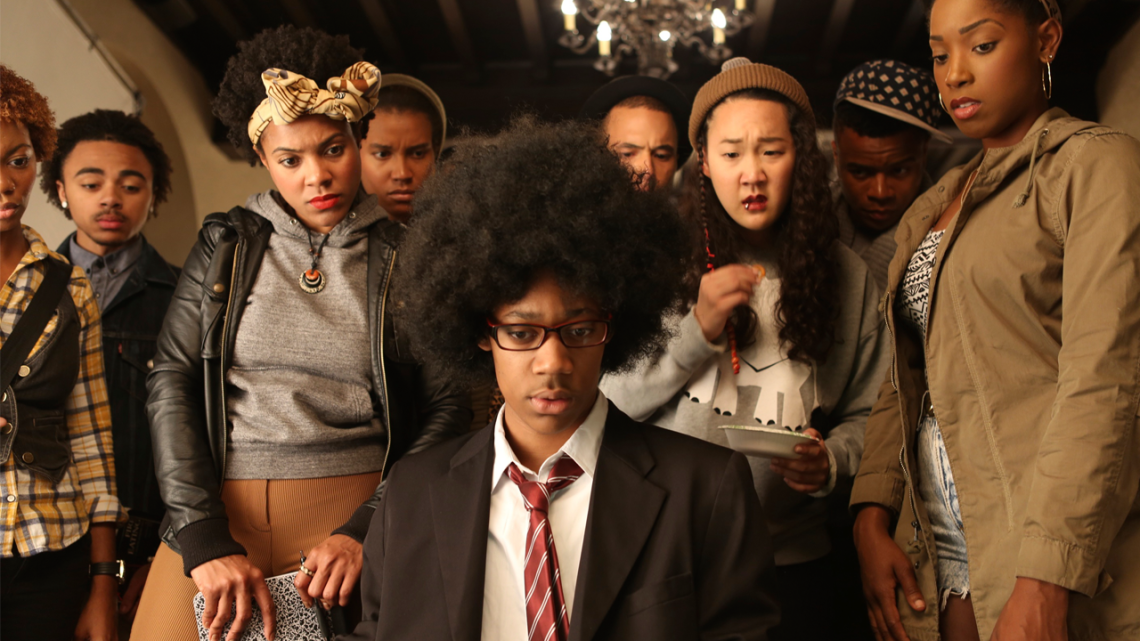 There’s a scene early in Justin Simien’s debut film Dear White People where Sam (Tessa Thompson) – a student at a fictional Harvard-ish Ivy League school who’s known for organizing rallies against racist school policies – has an argument with her white friend-with-benefits Gabe. He just criticized her latest film project, which used silent film aesthetics and recent news footage to suggest that the same fears informing D.W. Griffith’s Birth of a Nation remain manifest in the contemporary political right wing. Sam rebukes his call for a more even-handed approach; defending her own right to create a “work that deals with the African diaspora in a postmodern way.” Simien keeps the scale even; each volley is returned smoothly, the two quickly revealing themselves to be worthy competitors. Sample dialogue: Sam claims that derogatory stereotypes of African-Americans in the media are perpetuated and consumed almost entirely by white individuals. Gabe counters: “Then who goes to see Tyler Perry movies?” Sam, with a sigh: “We’re an underfed market.”

What’s notable about the scene isn’t what the two are saying. It’s the grace, eloquence, and speed with which they say it. Simien allows the majority of the argument to play out in long shot, never slowing down to cut between close-up shots and reverse shots, instead letting the two release their insults at a bullet’s pace, unimpeded by the rhythms of editing. Yes, this is a dramatic dialectic dissertation on the relevancy of activist art in an era where most audiences will likely already be converted to whatever cause is being preached. However, and the pleasure of this point cannot be overstated, the scene is also pure screwball comedy. Bickering back-and-forth, each conclusion a barb, an unacknowledged sexual tension coursing through each word; Sam and Gabe could be Cary Grant and Katharine Hepburn.

But to limit a take on the film to their arc would be to misrepresent it. This isn’t a romantic comedy, it’s an all-too-realistic satire depicting an entire college ecosystem strung out and put on display from the top-down; more School Daze than Bringing Up Baby. (Even the title Dear White People seems a reduction – Simien’s critical eye doesn’t spare some the hypocrisy inherent in the way Sam and her “nationalist” friends go about their business.) There’s hardly a straight-through plot here; instead, we open and close with moments from a climactic blackface-party-slash-”race war,” with numerous preceding incidents involving the participants of said war filling the time in between. (Those participants include: a self-consciously edgy white comedian; the Dean of Admissions’ not-as-straight-arrow-as-he-looks son; and a scrawny journalist who melancholically refers to himself as “too black for the white kids, and too white for the black kids.”)

Much as Simien allows hischaracters to gab about their differences with grace, his camera continually frames them in stylish and attractive compositions. Throughout the movie, he steals from the best: Shots are taken from The Shining, Persona, Network, Barry Lyndon, The Warriors, Do the Right Thing; everywhere. When I saw the film 6 months ago at a festival, I found the approach derivative. But I was missing the massive significance of Simien’s achievement: Just as he conjured up the syntax of classic screwball comedies with Sam and Gabe, he’s used these so-called “borrowed shots” to recontextualize the dominant imagery of more than 50 years of almost-entirely-white pop-art cinema through the lens of the contemporary black experience. He’s giving sound and image to the voices and bodies that have been shut out of cinema’s first century almost entirely, using the grammar and compositions that defined that century. Per Sam: Dear White People is a film that deals with the African diaspora in a postmodern way.

One thought on ““Dear White People””