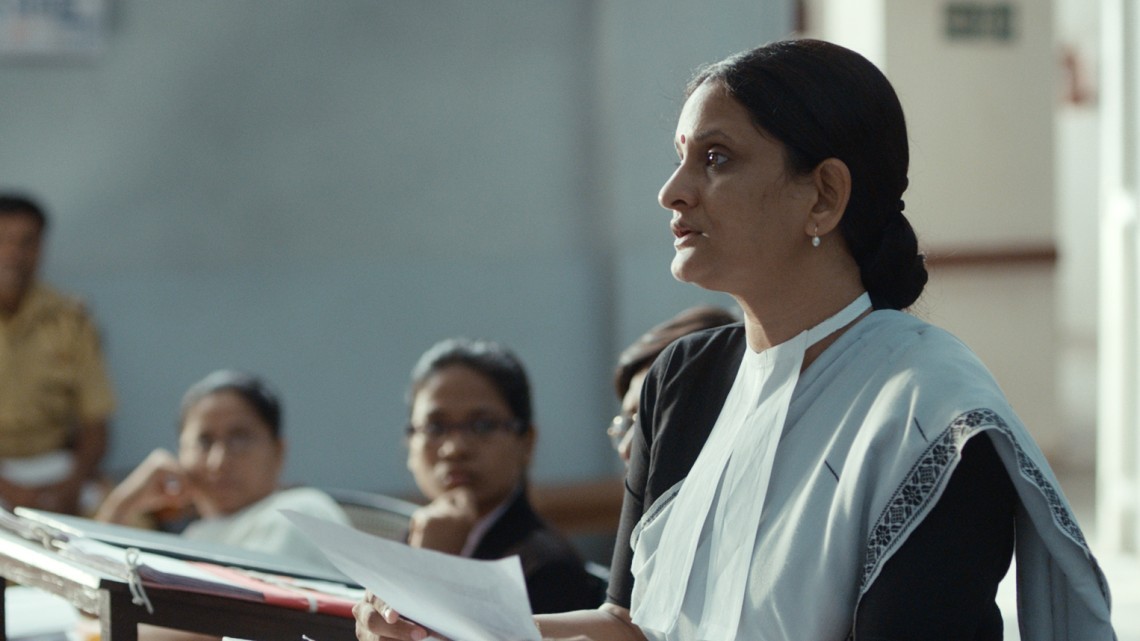 In Session: Talent Worth Watching In “Court”

Chaitanya Tamhane’s Court is the writer-director’s first feature, but it’s so accomplished that he might fool you into thinking that he’s been doing this for years. Partly, that’s a credit to his technique and his craft. Tamhane favors a style that emphasizes long takes, steady cinematography, and careful editing. Every shot he photographs, every image he composes, every cut he makes feels deeply intentional, all the better to avoid throwaway moments and wasted scenery. More importantly, Court is a courtroom drama that’s so muted and stripped down we may, at times, come dangerously close to forgetting it’s a courtroom drama at all.

That means the film’s appeal will be limited chiefly to the art-house crowd, but what an experience Tamhane has woven together for that crowd. Court avoids the trappings of its own category, and for good reason: Tamhane wishes to humanize the men and women running his country’s baffling legal system, even as he takes them to the woodshed. Ostensibly, the film’s chief character is Narayan Kamble (Vira Sathidar), a part-time tutor, full time activist-bard whom we first meet teaching a room full of children. Later on, Narayan makes an impassioned performance of marathi dalit poetry at an outdoor locale, in which he proclaims his scathing indictments of India’s social ills and inequities. Halfway through the set, he’s promptly arrested on obviously bogus charges regarding the suicide of a sewage worker. The man listened to one of Narayan’s songs, we’re told, and promptly decided to bump himself off. It’s an accusation that over time proves at least twice as specious as it sounds.

Following Narayan’s detainment, the film frequently veers away from his story to those of his lawyer, Vinay Vora (Vivek Gomber), and Nutan (Geetanjali Kulkarni), the public prosecutor opposing him. Vinay goes out to bars with his friends and has embarrassing lunches with his parents. Nutan cooks dinner for her family and takes them to a stage play that fashions grotesque anti-immigration sentiment and cultural caste-ism as merry, screwball entertainment. Meanwhile, Narayan is left off to Court’s margins, awaiting a bail ruling that may never come. He’s something of a supporting character in his own narrative, but that’s by design. Tamhane has outfitted Court with a clear if modest agenda: to show up his nation’s judicial process as a glacial nightmare rife with draconian horsepucky.

What he’s less interested in is tarring and feathering the participants in that process. We’re naturally inclined to side with Vinay; he’s Court’s de facto good guy, a young man trying his best to defend Narayan against political incarceration dressed up as law. But Tamhane refuses to paint Nutan as a villain, preferring to stress her humanity instead. She’s apathetic to the rigmarole of litigation—she complains to a colleague about seeing the same faces every day, wishing for Narayan’s quick conviction to assuage her boredom—but she is nonetheless diligent about studying her notes each night. We might not end up liking Nutan or the role she plays in attainting the affably unapologetic Narayan, but Court argues that the greatest threat to civil liberties in India is the institution that’s supposed to protect said liberties.

But the people running that institution don’t help much either, of course. Nutan is a fusty conservative; she trots out statutes and codes that date back to colonial India to make her case. Judge Sadavarte (Pradeep Joshi), the man presiding over Narayan’s trial, is impatient and stuffy; he dismisses a woman in a different proceeding for wearing a sleeveless shirt. How can real justice be done when the people charged with meting it out treat it as little more than a 9-to-5 job? Tamhane suggests that law in India is a cruel farce. If Court is half as authentic as his craftsmanship implies, then maybe he’s not that far off. Perhaps that’s why Tamhane doesn’t bother with embellishing Nutan and Sadavarte or pegging them as antagonists. They’re capable of doing that on their own.

The film only stumbles in its conclusion, which sets up the perfect closing shot—an extended lingering portrait of the darkening courtroom as everybody filters out for a month-long holiday—and tacks on an epilogue that could easily have met the cutting room floor. (That coda, at least, offers a glimpse of who Sadavarte really is as a man, and it isn’t pretty.) But Court shows such incredible self-assurance of both technique and vision that Tamhane’s choice to belabor his point is hardly damaging; besides, complaining about excess length is a tad on-the-nose for a picture that silently tut-tuts people who want the show to end as fast as possible. Debuts like this don’t come around often. When they do, they should be taken seriously. On the basis of Court, Tamhane looks to be a talent worth watching.

One thought on “In Session: Talent Worth Watching In “Court””