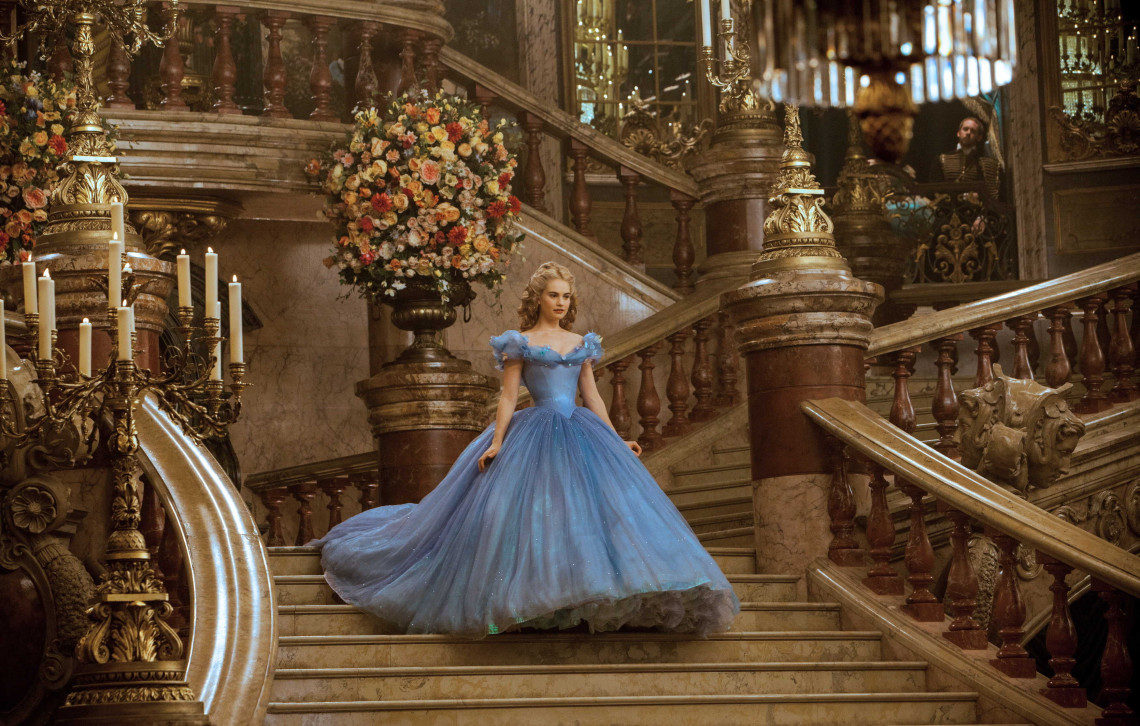 We have entered a brave new world of Disney live-action filmmaking, which you can choose to take literally or ironically depending on your point of view. Disney’s recent, splashy re-do of Cinderella is the latest entry in what appears to be an expansive genre to come: live-action, but CGI-driven, retellings of older hand-drawn animated films. Disney’s already released Alice in Wonderland (a sequel is on the way next summer), and have The Jungle Book coming next spring as well as a more somber take on Pete’s Dragon later in 2016; add to that their announced live-action versions of Peter Pan (from Tinker Bell’s point of view), Winnie the Pooh (from indie darling Alex Ross Perry), and Aladdin (all about the Genie, natch), and it’s fair to say that Disney’s future is your past. (Literally hours before this review was published, Disney announced they’d be making a new version of Mary Poppins, directed by Rob Marshall. Will wonders never cease?)

If Cinderella, which is now available on Blu-ray and digital streaming platforms, is any indication, we can expect movies that are bland, unremarkable, and utterly unable to prove why they exist aside from making easy money. Unlike Tim Burton’s take on Alice in Wonderland, Cinderella is a genuinely colorful, and never drab, effort; faint praise though it may be, this film is vastly more tolerable. But none of the film’s scenes or characters suggest an improvement on the 1950 animated film, or on many of the other, non-Disney adaptations of this classic fairy tale. The new Cinderella isn’t without its charms–with Cate Blanchett glaring imperiously and imbuing even the shortest lines of dialogue with intense gravitas as Lady Tremaine, how could this movie not be a little fun? Yet it cannot help but seem like a pale imitation of a film steeped in iconography.

In some respects, the general sense of play-acting here may be intentional thanks to director Kenneth Branagh and his heightened sense of mannered royalty. Even when she’s forced to act as a servant to her tyrannical stepmother and idiotic stepsisters, Ella (the toothy Lily James) holds herself elegantly. She follows the advice of her late mother to “have courage and be kind,” a phrase that is uttered so often in this film that, if you chose to play a drinking game where you drank a shot each time you heard it, you’d be dead before the main character got transformed for the ball. Ella, re-dubbed Cinderella by her new family, finds solace in her animal friends and eventually, a mysterious and handsome young man named Kit (Richard Madden) she meets while riding a horse one day in the woods. Surprise, surprise: Kit is actually the prince of the kingdom, and is so taken by the unnamed young woman he meets that he invites every maiden in the land to a formal ball where he’s meant to select his bride.

There are few, if any, surprises in this version of Cinderella, written by Chris Weitz. If you’re familiar with the fairy tale (in other words, if you are a living, breathing human being with any level of awareness of popular culture), there’s nothing remotely different to discover with this take. While it’s admirable that, unlike even last year’s Maleficent, this film isn’t trying to shake things up, that doesn’t mean that the story works any better, or sidesteps any inherent misogyny, in the 21st century than it might have in 1950. Cinderella’s unwillingness to speak out against her abusers is, no doubt, part of the original fairy tale; the problem is that this film posits her stance of being courageous and kind as the equivalent to being passive and letting people steamroll over her. And even though the prince is given a bit more personality and life in this version, he still talks about his future bride as property; in one scene with a friend of his in the kingdom, she’s referred to as “that one.”

There are flashes of quality in Cinderella, from the stunning production design and costumes to Blanchett’s nasty performance to the supporting work from Derek Jacobi as the ailing king. But then there’s the unnecessary antagonism from Stellan Skarsgard as the power-driven Grand Duke, as well as the dual sequences where the Fairy Godmother’s spell works its magic in turning Cinderella into a princess-like guest at the ball and then runs out. These scenes–which genuinely feel endless–are driven by hokey, hoary computer effects that stand apart from the otherwise tactile world this film creates. But no matter how many practical or computer effects there are, one imagines that Cinderella is going to be the first of many Disney live-action films that simply inspire this reaction: “I’ve seen this before as an animated film, and the animated film was better.”

Like pretty much every other Disney Blu-ray release, Cinderella looks and sounds immaculate in high-definition. The CGI effects remain unimpressive, but each costume, each set, and each hairstyle–there are lots of all of these–look really great on Blu-ray. Disney does right by its new releases in Blu-ray, especially its live-action films. This one’s no different.

Unsurprisingly, the Cinderella Blu-ray is light on special features, offering a mere handful that amount to barely 30 minutes overall. (This doesn’t count the Frozen Fever short that played in front of the film, and is included on the disc. It’s also part of the recent Disney shorts Blu-ray release, so if you happen to own that, you’ll find nothing new regarding the short here.) The most substantial extras are “A Fairy Tale Comes to Life” and “Staging the Ball.” The former is a standard-issue behind-the-scenes featurette with brief talking-head interviews with the majority of cast and crew members, while the latter serves as a too-short but intriguing look at the film’s costume and production design. The sequence at the ball is undoubtedly the film’s centerpiece, so it does make sense for this Blu-ray to dedicate a separate extra.

There’s also an alternate opening scene, a costume-test montage, and one very short special feature on the use of animals in the film that’s only notable for Kenneth Branagh’s apparent diplomacy regarding furry creatures. (He says it was fun, but every word he says is undone by the pained look on his face.)

Cinderella is inoffensive and unmemorable. (On first viewing, it’s a little better than that, but not much better.) If you’re a diehard Cate Blanchett or Kenneth Branagh-as-director fan, then this one’s for you. But if you love the story and Disney’s take on it, why not just watch the animated film (also on Blu-ray) instead?