“Cheap Thrills”: The Savage One-Upsmanship of the Desperate

Cheap Thrills begins with the sounds of sex — or, rather, sex interrupted. Craig (Pat Healy) is entering the throes of passion with his wife Audrey (Amanda Fuller) one morning, when the alarm clock suddenly goes off. Craig hits the snooze button, delaying the inevitable troubles of the day. Their baby starts crying. Nothing, it seems, will prevent reality from sneaking in and disturbing even the smallest bit of momentary bliss.

It all swiftly slides downhill from there: the second he leaves his sanctuary, Craig spies an eviction notice on the door: seven days to pay $4,500 or else. He’s barely scraping by, his dreams of becoming a writer having quickly been doused, settling for a car mechanic job to try to make ends meet. Yet reality kicks him while he’s down, as the garage is downsizing, and Craig the writer is one of the first to be shown the door. He ends up in a seedy Los Angeles bar, the type of bar where the lighting is so low that you feel you are hidden from your problems, tucked away in a shadowy corner with the rest of the bottom-feeders, where all are attempting to avoid a hard look in the mirror.

Suddenly, Craig is grabbed from behind by the neck. “Give me your money. Give it all to me, Craig,” he hears mumbled into his ear. He turns to see his high school friend Vince (Ethan Embry), whom he hasn’t seen in five years. Vince took a different path in life, dropping out of school, breaking bones as a loan shark to put food on the table. “You’ve gotta watch your back, brother, how many times have I told you that?” Vince tells him with a smile after the scare. These words grow eerily prescient as the night’s events unfold.

Craig hits the bathroom, where he encounters a cocaine user, who swiftly rushes out. He notices a rolled-up $50, dropped into the toilet water. We see Craig think for a moment. The next shot, Craig is leaving the bathroom… but we see him shaking his hand in the air to further dry it. The director, E.L. Katz, has spared us the indignity of seeing Craig’s act of self-degradation in order to find a little extra cash. He won’t spare us much longer.

Vince is now sitting with the coke user, Colin (David Koechner), and his hot wife, Violet (Sara Paxton). Colin wants to show Violet a good time, as it’s her birthday, and he begins spending money freely– hundreds of dollars on tequila, the type of money Craig and Vince wish they could have. Colin starts presenting them with a series of bets. They start innocuously enough: $50 for the first man to finish his shot of tequila, $100 if one can get the cute girl at the bar to slap him, and so forth. It escalates, slowly at first. We begin to see, in the shadowy corner of the bar and in the dark parking lot of a seedy strip club, Craig and Vince’s true colors, the first glimmers of their desire to do anything for a buck. Once the party is moved to Violet’s well-lit fancy house, the light shines brightly on our disgusting animalistic nature to gain the upper hand on our fellow man, as quickly as possible, by any means necessary. 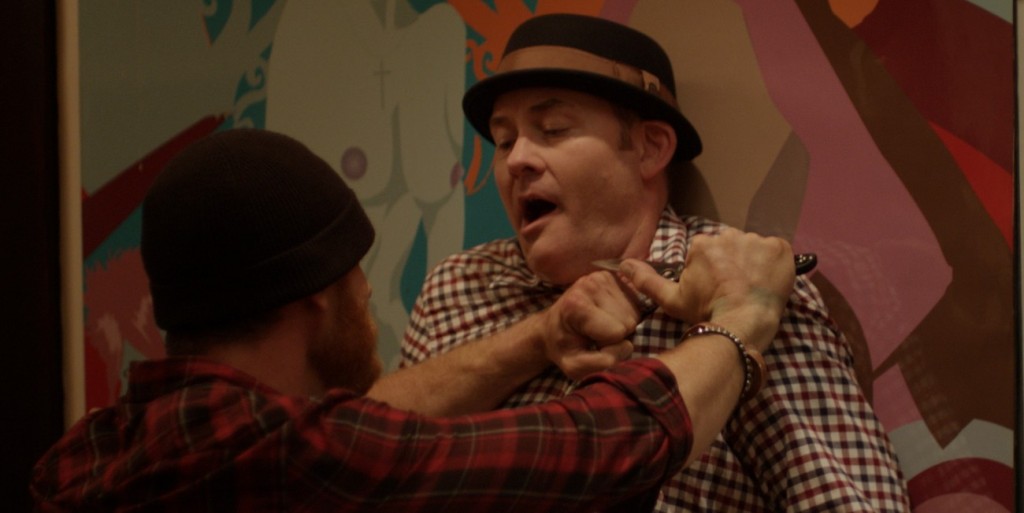 Cheap Thrills is sneakily slow with its burn: it’s easy to see where the night will take us, and Katz has a great deal of fun stretching out the desperation before it reaches its inevitably absurd heights. Note how many times he denies us the visual of the actual act taking place, but instead hitting us with the build and then a graphic display of the aftermath. One act of self-inflicted violence isn’t even shown on screen, but the real tension and horror comes from Craig and Vince, attempting to out-bid the other in lowering the payout they might receive for the deed. Eventually, this playfulness gives way in the final act to gross-out close-ups of absurd violence and disgust, unable to turn away from how low its characters have become willing to sink. It sadly lowers the tension — once the director puts that which has been kept off-screen front and center, there’s nowhere to go but inevitably grosser and grosser — but it’s where the story is destined to go.

Colin and Violet aren’t really given any backstory or notable personality traits, except for a voyeurism fetish, which feels like a cliche for manipulative psychopaths in stories like these. However, credit must goes to the actors, Koechner in particular, for keeping their characters steeped in earnest humanity. Paxton is given sadly little to do, as Violet is the least developed of the characters, but Koechner takes his usual doofy blowhard routine and totally grounds it. At times, he almost seems sad to be asking these guys to execute these dares. His deadpan and sincere delivery of his lines peppers the film with much-needed humor; after one act of horror, he sadly stares at the aftermath and utters, “That was grim.” While it denies the film some added complexity, Colin and Violet aren’t the film’s focus anyhow, merely vessels to provide the depths to which our characters must sink.

At the end of the day, the film’s success largely rests on the shoulders of Pat Healy. He manages to give, much like in Craig Zobel’s Compliance, a strange sense of humanity to the awkward losers he embodies. He carries Craig’s misfortune, desperation, and outright delusion with grace. Craig is called “misfit” early on by Colin, and he seems desperate to leave many times throughout, yet keeps coming back, claiming his family could use more money. How much of this is fueled by wanting to make a better life for his loved ones? We hear that in school he was picked on and beaten up constantly — how much of this is fueled by his desire to prove himself the strongest in the room? There are no clear answers, but Healy keeps us engrossed. After one horrifying act, leaving Craig sobbing and unquestionably altered forever, Colin glances over: “How does it feel to be $15,000 richer?” Craig looks up, his tears immediately drying up, and says, “Do me a favor. Let me see it.” Colin shows him the cash. Craig starts laughing, his physical and emotional pain drifting away, and Healy presents us with joy in its purest form. Cheap Thrills doesn’t present us necessarily with the most original satire or complex characters, but it’s terrifically crafted, anchored by strong performances and a keen build in tension.