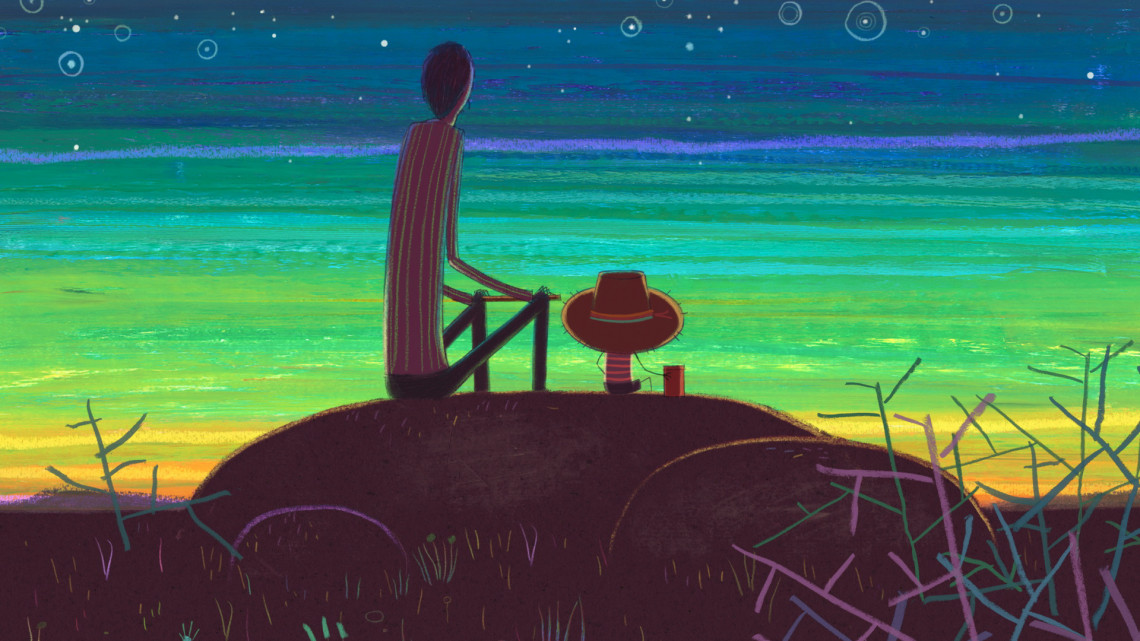 “Boy and the World” Is A Can’t-Miss Film

Simple shapes form kaleidoscopic fractals. The image continually pulls outward until the viewer understands that they’re looking at atoms, then molecules, then compounds, all composing a colored stone. Observing the stone is a young boy, drawn in a manner so simple that it’s almost elemental — barely more than a stick figure. The boy’s home, his parents, and everything around them are similarly rendered in the basest lines and colors, all against a featureless white background. It’s not an emptiness, but a canvas onto which anything may appear. It’ll fill in as the boy learns more about the world around him.

This happens after the boy’s father leaves the rural home in search of work, and the boy soon follows, becoming stranded in a bewildering series of environments of overwhelming hustle and bustle. The fractal motif expands, seen in the repeating pattern of hundreds of orchard pickers or in the swirling vestments of a parade. The blank spaces vanish. Clean simplicity is buried beneath urban sprawl. The artistic style becomes more detailed and lavish. Through it all, the boy’s understanding of life deepens, as he’s confronted with the myriad ways in which people struggle to survive. Through fields, streets, landfills, and more, he gets a stark education in class difference, beholding the plenty of a few from afar while wading through muck with the rest.

Boy and the World is a child’s-eye view of a host of social ills, from deforestation to police brutality, not even couched in allegory so much as presented in a slightly more palatable form, thanks to the animated milieu. It’s not a coming-of-age tale in which the protagonist comes into himself through conquering one simple challenge after another, in the manner of a Dreamworks or Disney flick. No bad guys are toppled here. Growing up is simply coming to grips with the way things are. Though it completely lacks the spoken word, this movie has far more on its mind than any kids’ film whose script is laden with “witty” repartee and adult-pandering references. Family films are generally so ideologically sanitized that something this nakedly political is a tremendous shot in the arm.

More importantly, director Alê Abreu’s visual sophistication is extraordinary. The dazzling geometric complexity of the settings are abuzz with energy, made of constantly moving parts. Boy and the World is animated, and understands that the power of the form lies in motion and not in the mere prettiness of a drawing. It is alive with music and color, fleshing out its basic plot with powerful emotion through both the grandest and smallest events and gestures. Don’t miss this.