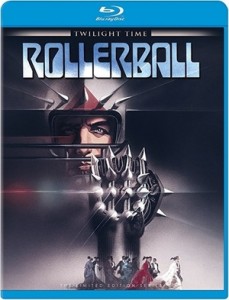 Released a year prior to Network, Norman Jewison’s Rollerball could almost pass for a B-movie riff on Paddy Chayefsky’s media satire. It depicts a future of mass docility, created and maintained by a violent sport that distracts the public from the actions of the corporate oligarchy that rules the world. The game is a worldwide one, yet the standardized game tracks sand away any cultural distinctions, so that geographical relocations are distinguishable only by the predominant racial makeup of a given crowd.

The game of rollerball hinges on a lack of individualism, on pain of death, to keep the masses in line. Someone should have reminded the executives of this before they let Jonathan E compete while wearing James Caan’s skin. The notion that Caan could ever just blend in is laughable; in a real dystopia founded upon forced collective drudgery, he would have been among the first against the wall. Sure enough, Caan’s Jonathan is the most recognizable star in the sport’s history, and when executives start stripping what few rules ordered the game to put him in an early grave, Jonathan only plays harder to defy them.

William Harrison adapted his own short story for the screenplay, and in truth, Rollerball clearly derives from a brief sketch of an idea. Jewison’s slack style, all calm long shots and lethargic pans around the game track, rarely capture the visceral thrill that the sport is meant to conjure, which makes the game look sloppy and basic, not primal and invigorating. The film is admirably short of the world-building that tediously weighs down most future projections, but that also creates a situation in which no world seems to exist outside tracks, gyms and boardrooms, with no feeling of the society held in sway by these unlikely centers of power.

The film has the advantage of prescience in forecasting a cynical corporate world, yet the best adaptation of this material remains John McTiernan’s 2002 remake, which is also not a good movie. It does, however, better understand the way bloodlust would hook a crowd, and that it takes an individual stand-out like Jonathan to perpetuate a working class that does not serve its own interest. After all, why does anyone slave away in menial tasks, but for the warped belief that hard work can make an entry level paper jockey a future executive? In retrospect, it’s a shame that Caan, who is even more intense off the track as he grapples with his jock superiority and a growing disgust for the thing that makes him an icon, could not have taken the lead in McTiernan’s version and the anonymous Chris Klein could not better serve Jewison’s collective vision.

Rollerball has the softer textures endemic to mid-’70s color film, and Twilight Time’s Blu-Ray likely looks as good as it possibly could, short of an absurdly involved restoration. Flesh tones are even, and the black levels of this considerably dark film are always strong. A 5.1 DTS-HD MA surround track inconsistently fields the snatches of dialogue and game noise and makes for aural pandemonium, and an accompanying lossless mono track just compresses all of those poorly mixed channels into one flat noise.

Two commentary tracks, one with director Jewison and the other with writer Harrison, are included, and both are incredibly dry, matter-of-fact tracks with upfront discussion of the film’s making and its themes. Long pauses in Harrison’s track make it a slog, but at lest Jewison has a sense of humor, occasionally chuckling at the ways the film is now dated even as he stands by its perceptive social commentary. A contemporary making-of and a retrospective look-back are both brief, perfunctory EPK material, and some TV spots and trailers complete the package. The label’s staff writer, Julie Kirgo, also contributes an essay in the included booklet.